Seema Pahwa, who has regaled us in several recent family dramas with her charm and acting skills, dons the director’s hat for Ramprasad Ki Tehrvi. Marking her directorial debut she helms a cast that boasts of several stellar performers that include Naseeruddin Shah, Supriya Pathak, Vinay Pathak, Konkona Sen Sharma, Parambrata Chattopadhyaya, Vikrant Massey, Manoj Pahwa, Deepika Amin and others.

The story starts with Ram Prasad Bhargava’s (Naseeruddin Shah) demise which prompts his large family to congregate in their ancestral Lucknow home till the customary 13th day ceremony (tehrvi). The family members are not exactly overjoyed on meeting each other and past secrets, grievances come tumbling out. The film depicts a typical messy North Indian joint family where sons, wives, children and sundry relatives come together to reminisce, crib, fight and squabble till they move out after the ceremony is over.

Supriya Pathak plays the inconsolable wife and the family matriarch who must brave the often repeated question, “Kaise Hua?” She is at her wits end as she feels alienated by her own children –four sons and two daughters. The three elder sons (Manoj Pahwa, Vinay Pathak, Ninad Kamat) whine over the neglect they felt during their childhood and matters are aggravated as they find out that their recently deceased father has left them a huge loan to repay. Their wives (Deepika Amin, Divya Jagdale, Sadiya Siddiqui) have their own agendas and form their own triumvirate wherein they target the fourth daughter-in-law played by Konkana Sensharma for having dreams of becoming a movie actor and hence not falling in line. She also believes in hiding nothing including her soft corner for her nephew played by Vikrant Massey. Parambrata Chattopadhyay plays the fourth son and the most responsible one as he is named after his father, while there are two sisters (Anubha Fatehpuria and Sarika Singh) bringing an over-crowded family home where people are accustomed to stepping over each other’s feet as well as egos.

Pahwa’s family drama is a gentle but sharp take on the family politics and how the blood that should bind is the only common thing left between members who have gone their separate routes. The film reminds of similar situations we’ve all been in and throws in questions like what will happen to the big house in a city which everyone has left and who will take care of the mother. 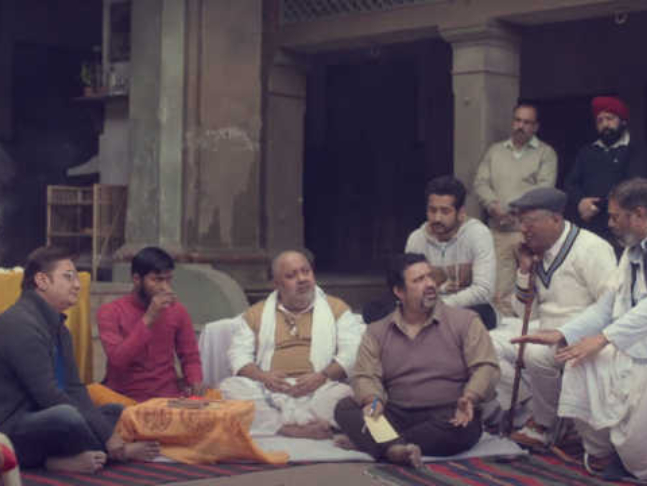 The writing and performances are pretty top-notch given the plethora of acclaimed actors. However, its biggest triumph is giving ample amount of screen space as well as a thorough character sketch to all its actors, whereby we cannot single out any one of them and it is the team work that brings them together as a cohesive whole. However, in some places Pahwa slips in the writing department as the family drama becomes slow and dreary to watch. Despite a great ensemble cast, Ram Prasad Ki Tehrvi turns out to be an average family entertainer.