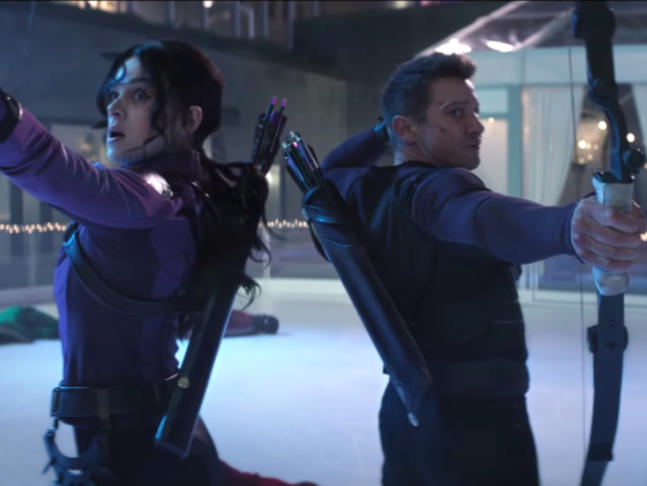 The first official trailer for Jeremy Renner starrer Hawkeye has been dropped online today. The trailer gives the first look at Marvel superhero’s upcoming stand-alone series on Disney+. Hawkeye stars Renner in the titular role of Clint Barton/Hawkeye and Hailee Steinfeld as Kate Bishop and depicts the thrilling ride of their mentor-mentee relationship in the series with high-octane action coupled with bow and arrow.

The trailer also shows Barton address his alter ego Ronin, which he transformed into after losing his family in Avengers: Infinity War. He was seen as Ronin in Vengers: Endgame. The trailer is full of action sequences and is set during Christmas season in post-blip New York City. In the series Barton passes the torch of Hawkeye to Bishop, a member of the group known as the Young Avengers and first female to take the Hawkeye name after him.

This holiday season, the best gifts come with a bow. Watch the new trailer for Marvel Studios’ #Hawkeye, and start streaming the Original Series November 24 on @DisneyPlus. pic.twitter.com/HArEGH2xSG

As per the logline, “Former Avenger Clint Barton has a seemingly simple mission: get back to his family for Christmas. Possible? Maybe with the help of Kate Bishop, a 22-year-old archer with dreams of becoming a Super Hero. The two are forced to work together when a presence from Barton’s past threatens to derail far more than the festive spirit.”

Hawkeye also stars Vera Farmiga, Fra Fee, Tony Dalton, Zahn McClarnon, Brian d’Arcy James, newcomer Alaqua Cox and Florence Pugh who made her debut as the new Black Widow in the Marvel film. The series is helmed by Rhys Thomas and directing duo Bert and Bertie. It premieres on Disney+ on November 2.