Actor Vijay Sethupathi on Sunday won the hearts of fans across the state with his powerful speech at the audio launch of director LokeshKanakaraj’s Master, featuring actors Vijay and Malavika Mohanan in the lead.

Participating in the audio launch of one of the most awaited Tamil films of the year, Vijay Sethupathi, who plays the antagonist in the film, said, “I wish to make two points on this occasion. One is about the Corona Virus. There is a beautiful word in Tamil called ‘Gunamaitaara’. When someone falls sick, people use this word to find out if he or she has gotten healed. Mind you, not just recovered but healed. The reason why we use this particular word is because it is related to our heart. It emanates from the idea that if your heart is healthy, you can keep all sicknesses at bay. At this time when the world is being threatened by the Corona virus, don’t panic. Keep your heart strong."

“Today,  we need to realize that only a fellow human being will come to the aid of another. No force from above will come to your aid. At a time when even family members are hesitating to touch their own kith and kin, I thank all the doctors the world over who are touching and treating patients afflicted with the deadly virus." 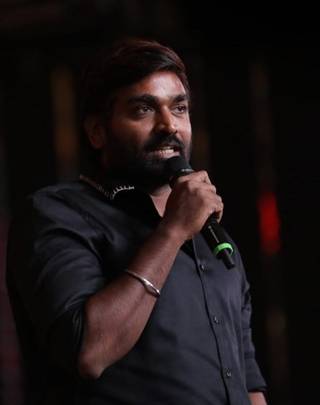 “Then, there is another point that I wish to make. There is another virus. This virus makes people fight amongst themselves over Gods. We all must understand one thing. Gods have been here for several thousand years. God hasn’t created people who are so great that they can protect him. Please do not mingle with any groups that claim to be saving or protecting Gods. A common man cannot save God. That is a lie. Do not believe this lie. If someone tells you something, do not reply citing what your religion states on the subject. Instead, teach them about the importance of being humane, about the need to respect and treat everybody with dignity and kindness.”

The actor, who spoke on a number of other issues including working on the much-awaited film, also heaped praises on actor Vijay, who, he said, was a genuinely nice guy.

On the experience of working with Vijay, Sethupathi said, “I once asked him, ‘Why don't you talk more often?’ He replied, ‘I like to observe’. I learnt a lesson that day.”

Stating that Vijay was really accommodative on the sets of Master, Sethupathi said, “He told me, ‘Do what you wish to do.’ He allowed me to work in a free manner. Creating a comfort zone for those who come and work for us is an indication of greatness. He has that greatness. I’ve always treated others with respect and dignity. When a person of a greater stature also does the same thing that you do, then your faith in your own action grows. I thank him for strengthening my faith in my own actions.”