The Bollywood Badshah, in the only interview he ever did on whether he was a gourmet with fine wining and dining habits, told MARK MANUEL that he hated food and had no favourite restaurants!

SEVENTEEN years ago, just after he had done Hum Tumhare Hain Sanam and before he could begin Kal Ho Na Ho, when his kids Aryan and Suhana were four and two, I did an interview of Shah Rukh Khan that was on food only. And drink, of course, though he wasn’t on Vodka then, but Bacardi, and he drank Pepsi. Lots of it. For me he made Espresso coffee. Himself, in Mannat’s kitchen, because Mohammed Shamim the resident cook was AWOL. 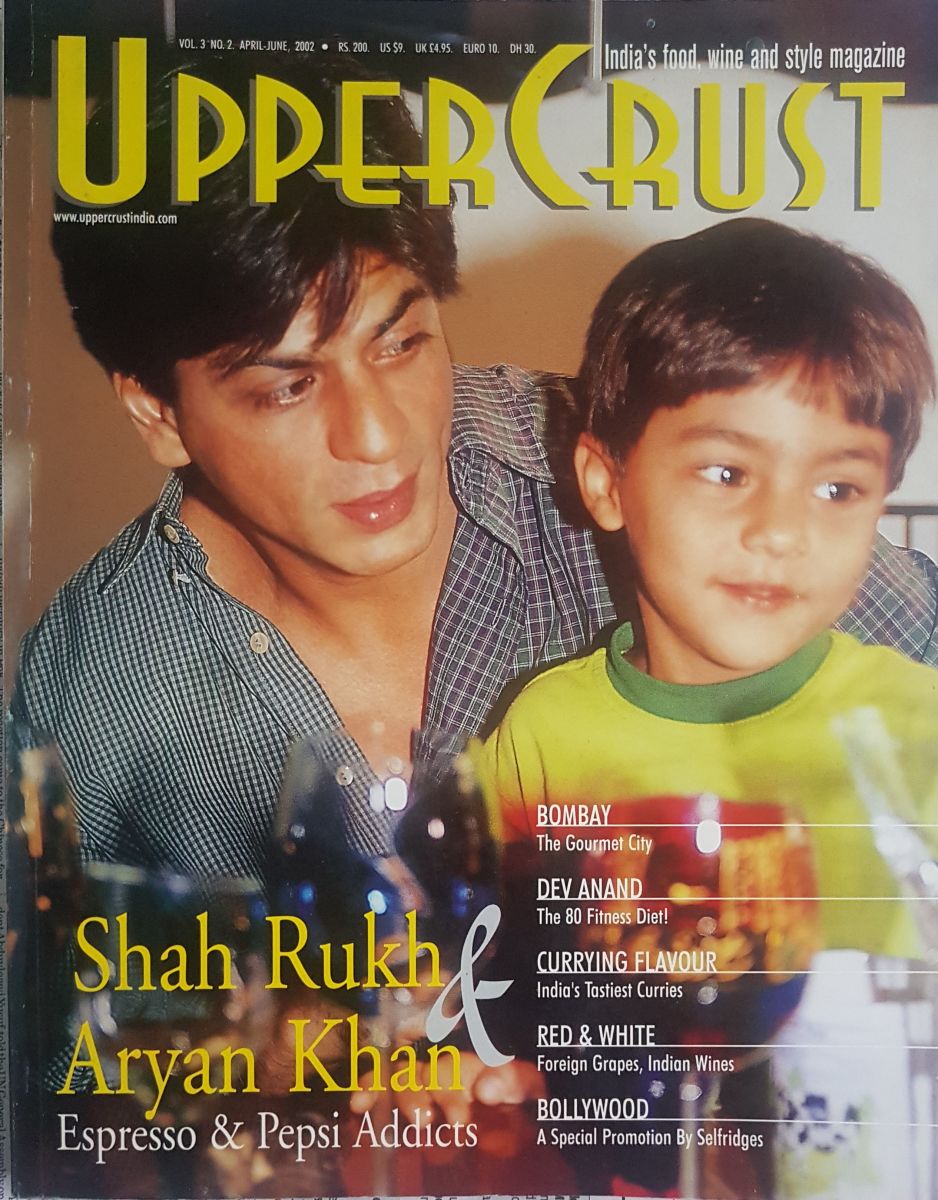 Shah Rukh explained how he made the Espresso: “I put Nescafe in a small coffee mug, pour little hot water in, then ghutao it with a chamcha. After that, I throw in more hot water. It is the closest you can get to Espresso with Nescafe.” He wasn’t a coffee addict himself. When I asked Shah Rukh if he had tasted Jamaican Blue Mountain, which at 100 dollars for 500 gm then was the world’s most expensive coffee, he looked at me in amazement and said, “No, Starbucks’ Cappuccino is as far as I’ll go.”

I was there to interview him on F&B for the UpperCrust magazine. Shah Rukh told me right away, “Eating food is like making love. Something very personal and meant just for you.” We were sitting in his den at Mannat. Our view was the sea. It was late Sunday afternoon. I wanted to know which were the favourite restaurants and cuisines of Bollywood’s No. 1 actor. He scowled. “Favourite restaurants? I have none! Favourite foods! None? Am I a foodie? No! I hate food!” 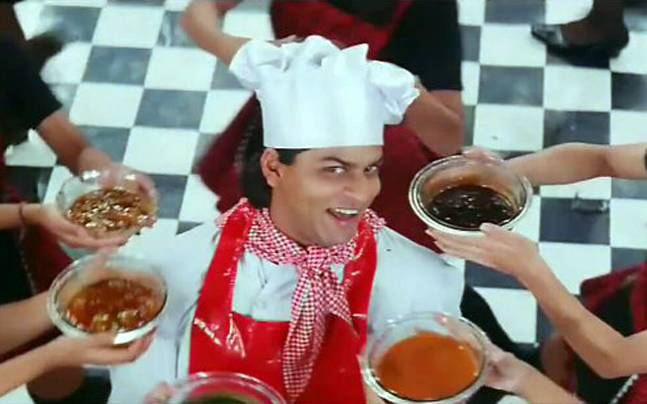 Here was a man whose parents were restaurateurs, they ran De Ramble’s above Balika Bazaar in New Delhi, and he’d probably grown up eating some great Mughlai cuisine. Yet he claimed to hate food! Shah Rukh explained, “My father was a Pathan, he looked like Gregory Peck, 6 feet 2 inches, grey eyes, and my Mum was Hyderabadi, a beautiful woman, like Waheeda Rehman. My upbringing was on the dry Pathani foods of Peshawar, Raan and Chaamp; and the aromatic masala khana of Hyderabad, the Biryanis and Khatti Dals. My parents mixed these and fed me. And to these, they would add the restaurant food, Butter Chicken and Mutton Korma. But they’re gone, and the food after them is not good enough. You understand?”

I did. Shah Rukh then revealed, “I truly believe food is only a stomach filler. It is as basic as the air we breathe. A necessity that should always remain a necessity. Excessive taste of anything takes you away from the core of life. I am always looking down on people who like to eat. For me, from simple to best, food is all the same. When I got married, my mother-in-law was worried because Gauri could not cook. I told her, ‘Don’t worry, to me it makes no difference.’ And it’s true, I can eat anything. Even dry bread and water.” He tried to discourage the interview by insisting he was “a boring person” to be around if you like food and eating out. “I can pass the whole day without realizing that I have not eaten. I don’t like going to restaurants. I hate having meetings in coffee shops. What a waste of time! I can call you home and talk over lunch. I’ve travelled all over the world and tried out all the local food wherever I’ve been. But in the end, I’ve come home knocking for Dal-Chawal! My mother used to say, ‘You should eat the food you like and wear clothes that people like.’” 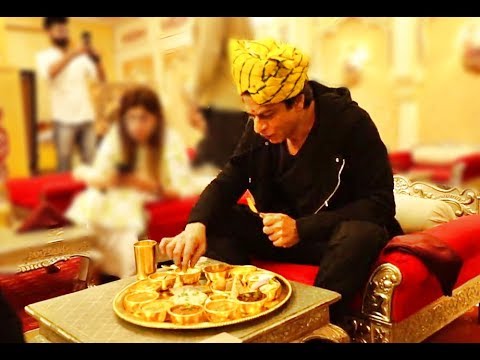 He narrated a funny incident when he he dined at a fancy nouvelle French cuisine restaurant in Hong Kong. “I could not figure out what the three glasses on the table were meant for,” Shah Rukh complained. “One was for water, the second for wine, but what was the third for? And so many kantes and churis! I didn’t know which was meant for what! I don’t like going to such restaurants where I don’t know what to do. And where the chef’s sentiments might be hurt if I ask for Pepsi instead of wine!”

“Favourite restaurants? I have none! Favourite foods! None? Am I a foodie? No! I hate food!”

Four-year-old Aryan burst in on us, a small bundle of hyperactive energy, and charged for Shah Rukh. Seeing the coffee mugs, he asked, “Can I have a Pepsi?” In the den was the biggest Pepsi vending machine I had ever seen. Shah Rukh told him, “You have another Pepsi, mummy will beat you!” Aryan replied boldly, “I’m not scared of mummy!” “Go and tell her that!” Shah Rukh mischievously advised the kid. He admitted that the rare occasion he wandered into Mannat’s kitchen it was to serve himself and have dinner there. But Shah Rukh could cook! “I have cooked Batman cookies with Aryan. And I can make tea, boil eggs, make really good Phulkas,” he said proudly. They kept an open house, he told me. Friends were forever dropping in at Mannat to be with him, Gauri, Aryan and daughter Suhana. “It’s called mehman nawazi,” he explained. “People should be happy to be with you. And you should make sure they are fed. The food should be made available to them because a lot of people are shy, you ask them if they’ll eat something, they’ll say no. I’m like that. This is not about food or how you serve it. It is about how you make people feel in your home. When friends come to Mannat, there’s always food for them. If not, the cook can make Anda Double-Roti.”

“And you, Espresso coffee,” I reminded him.

Holi 2021: Gujiyas to spending time with family, celebs reveal their plans to celebrate festival of colours amid Covid 2.0

365 days to COVID-19 lockdown: From household chores to workout from home, what 'aatmanirbhar' Bollywood celebs did at home