From Rashami Desai to Rakhi Sawant, TV celebs come out in support of Nisha Rawal in her domestic violence case against Karan Mehra

Yeh Rishta Kya Kehlata Hai fame actor Karan Mehra has been accused by his wife, actress Nisha Rawal, of having an affair, taking her jewellery and beating her up. Karan was granted bail on Tuesday morning after his arrest the night before following a complaint by Nisha over a domestic fight. Now, the TV industry has come forward to offer support to Nisha.

Rakhi Sawant was spotted by the paparazzi on Wednesday, June 2 in Andheri, where she empathised with Nisha. The actress said that after learning about this news and after seeing the scars on Nisha's forehead, she cried. Rakhi Sawant said, "Nisha is a very soft girl and after seeing the bruises, I cried. Karan, too, is a soft person, I don't know what's going on." Rakhi further added, "After watching this, mera shaadi aur pyaar par se vishwaas uth gaya hai." 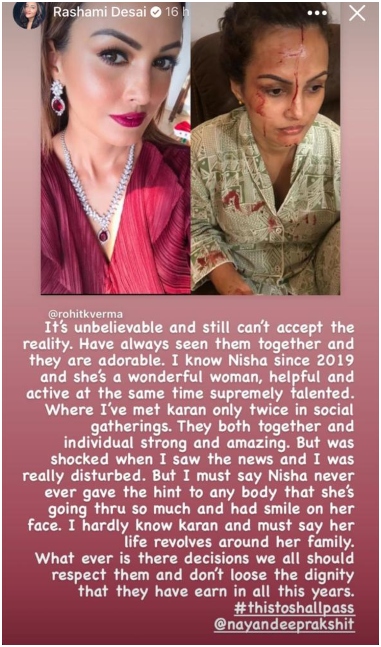 Chahatt Khanna, on the other hand, said, "I was dazed and (it) took me back in time. I have been hiding away. It affected me a lot. I personally think you should not wash your dirty linen in public. It is not respectable. I do not support it. They should not talk in media and (it) makes no sense. I am nobody to say. Coming out in public and talking about your affairs is not cool.”

Abhinav Kohli said, “I can’t say anything on what is happening between the couple. However, Nisha will have to understand that whatever difficulties they go through in their relationship, a father will never hurt his child.” Abhinav also feels that the law made for women is being misused in some way. He said, “My wife Shweta Tiwari is in South Africa for work right now. His father should be taking care of their child in this situation but a servant is doing that. In 365 days, I have met my son, Reyansh, for only 35 days. I feel disturbed that at a time when this pandemic is affecting children badly, she is not with my son but in South Africa. I have no clue who is with my child right now.”

Fashion designer and Nisha's best friend Rohit K Verma took to Instagram to hit back at trolls targeting Nisha, asking them if they support physical abuse or domestic violence. "Nisha, the most resilient and gentle soul has always believed in finding solutions amicably. I have seen her through her highs and lows and she has always risen above the blocks of life with an additional smile on her face. This time, she has been at the receiving end of untamed anger which has impacted her physically and no amount of excuses can justify this act against her," Rohit wrote in an Instagram post.

"For those who pick sides without knowledge, understand that no individual has the right to touch another person with an ill intention or hurt them physically which in turn leads to mental trauma. If you still don't get this basic understanding, then it's high time you ask your mother how to be a human to begin with," he added. Hitting back at trolls, he further wrote: "The facade hides the true fact and people are very good at that. Picking up sides trolling and supporting won't help as it is very easy to sit back and comment on other people going through rough patches. The book should not be judged by its cover and every story in life has a dark side too. We must pray that things fall in place without any damage to anyone be it of any sort and moreover in all this we must never forget that there is a child involved who is at this point oblivious to the cruel workings of the world let's keep his innocence intact. All those who are trolling is with ur hate in speech just wanna ask one simple question that u need to answer ur souls are u in favour of Physical Abuse (Domestic Violence)? @missnisharawal," he concluded.