Kartik Aaryan, Bhumi Pednekar and Ananya Panday bring a refreshing take to the 1978 hit film Pati Patni Aur Woh that featured Sanjeev Kumar, Vidya Sinha and Ranjeeta Kaur in the leads. The remake has introduced a few changes which go well with the storyline and keep the core intact. The film revolves around Abhinav Tyagi aka Chintu (Kartik Aaryan), a civil engineer who works at PWD Kanpur. He is supposedly an obedient son who followed his parents’ wish of pursuing an Engineering degree and then secured a government job and subsequently got married. However, he is not happy with his mundane and ordinary life and seeks excitement beyond it.

He’s married to Vedika (Bhumi Pednekar). It’s an arranged thingy and she reveals her recent break-up and her ‘virginity status’ and even informs him that her hobby is ‘sex’. All this in the first meeting. Abhinav is not perturbed by this admission but his happy marriage undergoes turbulence when Tapasya Singh (Ananya Panday) enters his life. She is a budding entrepreneur from Delhi who comes to Kanpur on official work and meets Abhinav. She comes like a thunderbolt and he is completely smitten by her. However, things are at a standstill because she learns about his marital status. However, Kartik sees a loophole in the scenario and tells Tapasya that he is in an unhappy marriage as his wife is having an extra-marital affair.

Ananya’s presence instils new life in Kartik’s character as he shaves off his moustache and tries to become a hip-and-happening cool dude in order to impress her. Kartik changes his body-language to suit the pretence. However, it’s his chemistry with Vedika that is impressive.

Bhumi as Vedika is no damsel-in-distress and takes things in her own hands when she comes to know about her husband’s straying. Bhumi is impressive and breathes the character. Ananya is a breath-of-fresh air, she lights up the screen with her performance but her character takes time to develop. Thankfully, she does not play the bimbette in the film. Aparshakti Khurana is the show-stealer. He has mastered the art of being the hero’s friend and with his witty dialogues, deadpan humour and crisp and sarcastic comments is a winner in Pati, Patni Aur Woh. Kartik’s Sonu Ke Titu Ki Sweety’s co-star Sunny Singh makes a brief yet pivotal guest appearance as Vedika’s ex-boyfriend that helps take the story further. 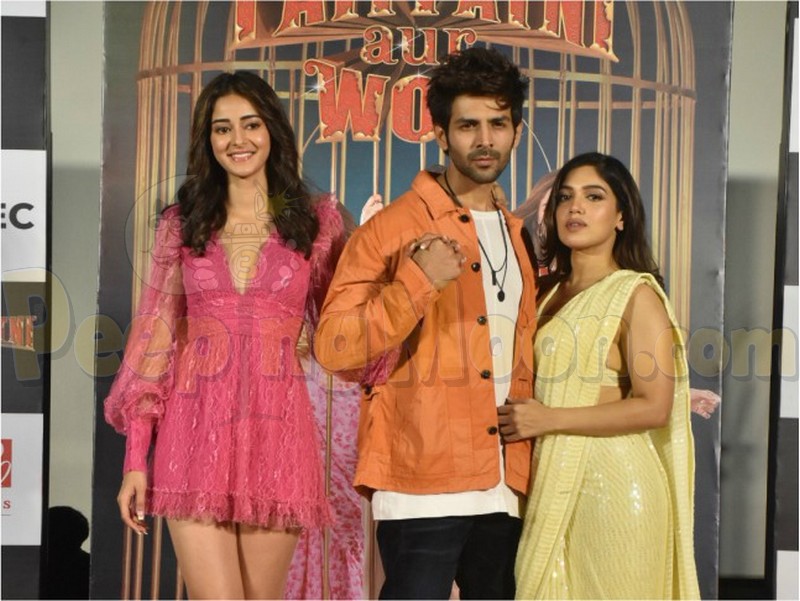 Mudassar Aziz’s direction is commendable as he neither trivializes nor condemns infidelity. Remaking a popular cult film is a task and that too to suit today’s sensibilities and must have been daunting, but Aziz manages it triumphantly and easily. He also brings to the fore the fact that very often we never take into account the emotional infidelity of people and always harp on the physical aspect of affairs.

All in all, the film is a good watch and should be enjoyed with a tub of popcorn and not too tight a rein on values and morals.