Love it or hate it, you are automatically transported to the world of Westeros when you hear Ramin Djawadi’s Game of Thrones title track playing in the background with miniature seven kingdoms building slowly. It’s been a decade since HBO along with creators David Benioff and D. B Weiss introduced us to the world of Westeros with Game of Thrones, based on George R R Martin’s book A Song of Ice and Fire, and it still lives in our hearts rent-free for both, right and wrong reasons.

Celebrating its ‘Iron Anniversary’, HBO has unveiled big plans for the fanatics of Westeros, right from its ‘Mara-Throne’ to its interactive GOT spotlight page. Recently, the makers unveiled its revamped season 8 trailer with fresh cuts and of course, massive spoilers. The trailer is a well-edited clip of the important highlights from the series finale that stirred up some bitter-sweet memories for the fans of the Emmy-winning show. It goes without saying that the hard-core fans were massively disappointed with the series finale given its lousy presentation (read, Starbucks cup) and poor character development. Check out the trailer below. And if you are yet to reach the series finale, *SPOILER ALERT*

The comment section of the post ranged from disappointment to sadness and sassy remarks. This just makes me sad. A moment of joy. Then sadness,” wrote one. Our enemy doesn't tire' *Tires within one episode," commented another. 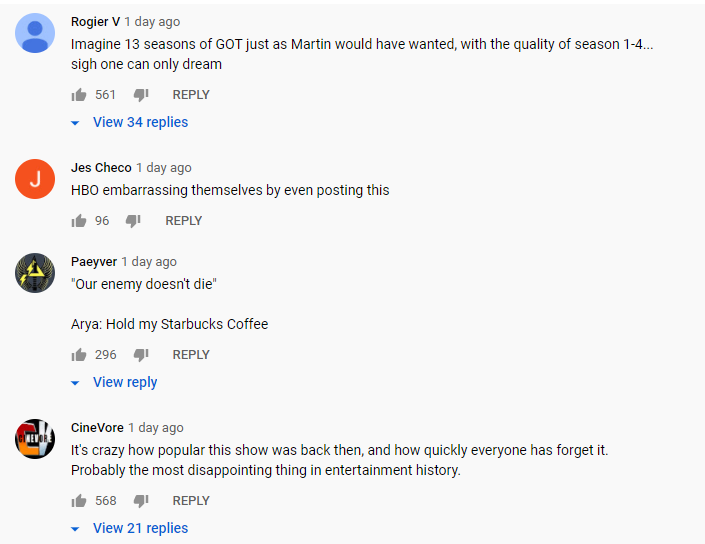 The last season of GOT tanked on ratings from both IMDB and Rotten Tomatoes. Post the release of Zach Snyder’s The Justice League from its parent company, Warner Media, fans have been demanding HBO to re-construct GOT’s series finale which ended badly in 2019. Given the makers as well as the actors have already moved on to the next projects, there’s a slim chance of the remake happening. Or, you never know the Night King might just bring back the long winter while the Queens and ‘Crows’ battle it out for Westeros’ Iron Throne!

As of now, all seasons of the cult series are streaming on HBO Max!