Advertisement
HomeFASHIONFashion SpecialCannes Film Festival: From Kristen Stewart's barefoot strut to Madonna's outfit reveal, we bring to you the red carpet rule-breakers that can't be tamed!

Cannes Film Festival: From Kristen Stewart's barefoot strut to Madonna's outfit reveal, we bring to you the red carpet rule-breakers that can't be tamed!

Cannes Film Festival 2020 won't be happening this year, courtesy the global pandemic of COVID-19 and that's a bummer! From watching the leading ladies strut in their very best to watching some of the best movies of the year premiere at the gala, we miss everything about Festival de Cannes.

Apart from these, we also miss the red carpet rebels that seem to miss the memo and break the rules on their own record. Fiesty and fun, these divas have a mind of their own and oh boy, have we not enjoyed that the most!

From ditching stilettos to opting for a 'slip' dress, here are all the stints that we've witnessed over the years:

Kristen Stewart ditches her Louboutins at the Gala (2018)

There's no better time to remember when Kristen Stewart rebelled against the Cannes Film Festival's dress code in 2018. It dates back to its early years in the 1940s: men are required to wear tuxedos and a bowtie, while women are expected to wear gowns. pic.twitter.com/49eYRy0gfn

This diva broke the gala's strict dress code when she slipped off her Louboutin heels and walked barefoot on the red carpet at the BlacKkKlansman premiere. While her feet might have been killing her, her act is seen more as a purposeful flouting of the film festival red carpet’s high heels only policy. She also made a strong statement about gender equality while doing so. "It has become really obvious that if (a man and I) were walking the red carpet together and someone stopped me and said, 'Excuse me, young lady, you're not wearing heels. You cannot come in.' Then (I'm going to say), 'Neither is my friend. Does he have to wear heels?' It can work both ways,” she had pointed out.

Well, she's definitely got a point!

Not to mention Madonna did the same routine during Cannes pic.twitter.com/CZomNJJMNf

For the premiere of her documentary 'In Bed with Madonna' at the 1991 gala, this beauty walked the red carpet wearing a pink satin cloak, leaving everyone frazzled. The sensation dropped the drape, revealing nothing but a two-piece Jean Paul Gaultier set, giving birth to the iconic conical bra that went on to become her OG style.

When Roberts lifted up the skirt of her Armani Privé gown at the Cannes 2016 red carpet, she had a huge surprise waiting underneath- she was barefoot! That’s right: Julia Roberts walked a red carpet at the Cannes Film Festival completely barefoot.

Well, that's what we call making a statement! This diva has always humorously and proactively disobeyed the rules of the gala. Be it ditching pants and heels or sporting sheer tops and mysterious headgears, this stunner has always managed to make a statement with her looks. This particular one has to be our favorite. A reverse blazer dress look with an open back which revealed she only wore white bum-shorts and a bright orange thing underneath.

Gotta have the guts, don't you agree? 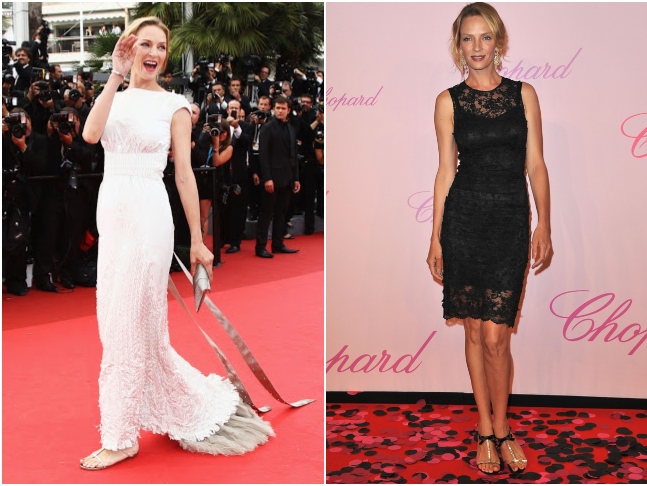 This has gotta be one of the most talked-about looks straight from the red carpet. Thurman has repeatedly ditched her heels for comfortable flats at the soiree, starting with her 2011 stint.

We really need more of these, don't you agree?

Television Moonwalk: Sargun Mehta adds to the ethnic extravaganza for

Overcoats to turtlenecks and knits, celebrity-approved winter wear to ring in the sweater-weather!

Voluminous gowns to Victorian-inspired shirts and tonged mane, all the reasons to be obsessed with dukes and dames of Netflix’s 'Bridgerton'