Advertisement
HomeBOLLYWOODEXCLUSIVEPeepingMoon Exclusive: To all those criticising Toofaan, all I want to say is, 'Get Well Soon'- Mrunal Thakur on film being accused of promoting 'love jihad'

PeepingMoon Exclusive: To all those criticising Toofaan, all I want to say is, 'Get Well Soon'- Mrunal Thakur on film being accused of promoting 'love jihad'

Trust Mrunal Thakur to add sunshine to a dull day with her infectious smile. The pretty actress has completed a decade in the industry and is going strong. Starting her career with the TV show Mujhse Kuchh Kehti...Yeh Khamoshiyaan, Mrunal dedicated 5 years of her career to television before making a smooth transition into films in 2018. After playing the titular role in Love Sonia, there is no looking back for her. Climbing the ladder of success every day, Mrunal considers herself the lucky one for getting the opportunity to do what she loves the most- acting.

After back-to-back successful films like Love Sonia, Super 30 and Batla House, Mrunal is gearing up for the release of Toofaan. Co-starring Farhan Akhtar and Paresh Rawal, Toofaan is a sports drama with boxing as its core theme. The film is directed by Rakeysh Omprakash Mehra and it will release on July 16 on Amazon Prime Video. Making the nation proud, Toofaan is going places and recently, clippings from the film's trailer got featured on a billboard at the iconic Times Square in New York City.

Ahead of Toofaan's release this Friday, Mrunal spoke to PeepingMoon exclusively. During the interview, the actress talked about her character Ananya, a doctor, who plays an important role in motivating Farhan's Aziz Ali or Ajju Bhai to be a better version of himself. Reacting to Toofaan receiving hate for allegedly promoting love jihad, Mrunal asked people to wait and watch the film before judging it by its cover. 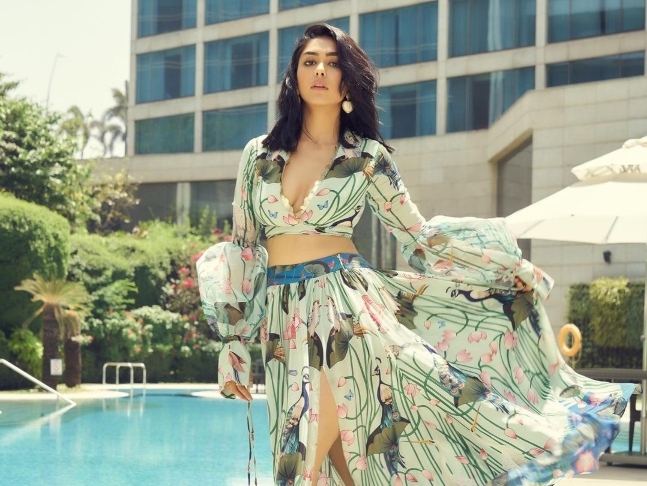 Can we say Toofaan is your most unconventional film?

It is the most unconventional role that I’ve played. I’m sure after watching Ananya, the way filmmakers write characters for actresses will change. I was able to perform because I was hungry for exceptional roles after Love Sonia. Of course, there were challenges, but one of the best things was I got to share the screen space with Farhan (Akhtar), and working with Pareshji (Rawal) was a dream come true. He is an institution himself. I was fangirling while working with Rakeysh (Omprakash Mehra) sir. We all love his films and the filmmaking process, which is extraordinary. Ruhani characters hote hai, you can never ever miss them out. I’m happy to play Ananya and there is a song dedicated to my character. Not many Bollywood actresses have had that chance. I’m the lucky one.

Who is Ananya for you?

Ananya is an independent girl, just like you & I. She is liberal and at the same time, she has been through a lot of pain and that’s why she is a doctor. If Ajju’s kaam is to todna fodna, Ananya’s kaam is to jodna. She makes sure she brings hope, a ray of sunshine and is someone who would always work as a catalyst when it comes to the transformation of Ajju Bhai to Aziz Ali. What I have learnt from Ananya is that some situations in our life are tough and we have to face them. We can’t be victimising ourselves. We have to channelise our energies and how incredible it is to motivate someone. I’m sure in every family, there is an Ananya, who has always helped us perform better. It is a beautiful love story, Mrunal’s favourite one. Ajju and Ananya are so close to my heart, I fell in love with them. They are beautiful for the way they support and take care of each other. This is a love story that we all are waiting to watch on the silver screen. 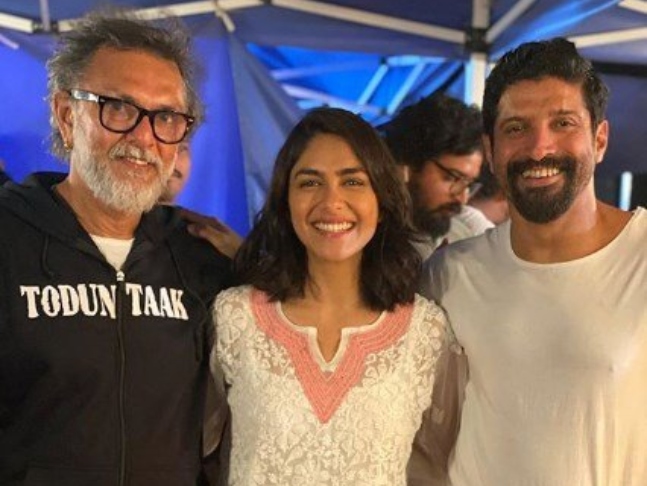 Toofaan made it to Times Square in New York City...

Love Sonia allowed me to go to New York for the first time as I attended the film's screening organised by the UN. After that, I felt that the journey was fading somewhere when it comes to the West but Amazon Prime Video and Excel Entertainment made sure that the film reaches the globe. Times Square is everyone’s favourite location. The billboard is put up and I’m so proud to be a part of this film. Now, there is no barrier. Indian films as well as actors are recognised and are going places. Toofaan is going places, today it is in New York.

Ananya isn’t the regular Bollywood heroine. What was your reaction when you got the film?

My first reaction was, “Why do I deserve this? This is too much to ask for!” I couldn’t believe it.

Did you incorporate any personal traits while playing Ananya?

The strength, if I can say. In real life, my mother and sister supported me and made sure that no matter what, I achieve my goals. I’m one of those few lucky people who got to do something that I really enjoy, acting. Talking about Ananya and Mrunal, there is one more similarity and that is both are Maharashtrians. I thoroughly enjoyed doing lezim, dancing to the beats of the dhol, wearing the nath, taking care of my family in the film and at the same time transforming Ajju Bhai to Aziz Ali.

How about Toofaan getting an all-female version?

That’s why I have started mixed martial arts and kickboxing. You never know if Rakeysh sir plans this for Toofaan 2 (laughs). I’m just hopeful and keeping my fingers crossed. Not Toofaan 2, but there are many other sports apart from boxing and sportspeople we need to celebrate. 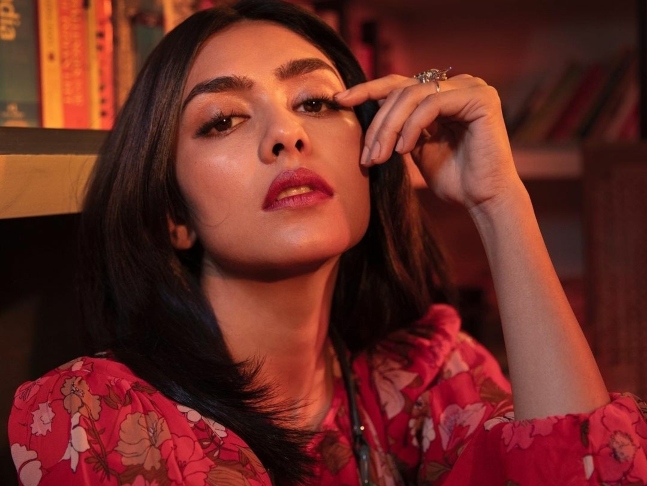 In the film, you ask Farhan to make a choice between Ajju Bhai- a street fighter or Aziz Ali- a boxer. Did you experience a phase where you had to choose between 2 good films?

Never. There was an interview of Meryl Streep that I was watching where she told that when she went through any script and if her heart started palpating, it was an indication that the character is made for her. Similarly, I was very focused and I don’t get confused. Right now, I’m practical also, you can’t make decisions based on your emotions. There were instances when I was confused but I never gave myself the option and chose the right path.

Super 30 completed 2 years on July 12. What are the changes you’ve self-monitored in yourself as an actor in these 2 years?

Earlier I used to compare my work with what my contemporaries did. Today, I don’t really compare myself to any other actress. What they are capable of doing, I will not be able to do that and vice-versa. Why waste my energy in comparing? I might as well invest my energy in making my performance impactful. I want to live a stress-free life. 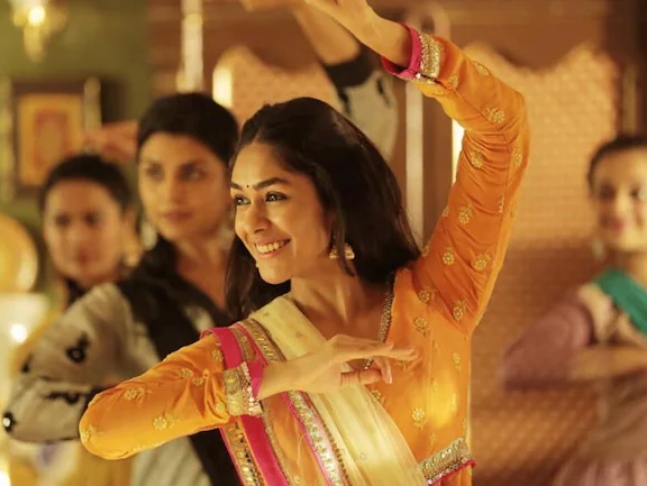 After Toofaan, you have another sports drama, Jersey. Are you worried about being stereotyped?

No, not at all. That is one of the reasons why I chose to be a part of Jersey. Toofaan is based on boxing but Jersey is all about cricket. At the same time, the journey of Ananya and the character I play in Jersey are absolutely different. Like I mentioned earlier, I don’t want to be monotonous and repeat myself. I don’t want to fall into the bracket of being stereotyped. Trust me, when people will watch me in Jersey, they’ll be surprised.

People start putting up their views even before watching the film. What if we just remove the word ‘jihad’ and trend the word ‘love’? Let’s spread love because that is what we are missing in life. It takes a lot to spread love. To all those criticising the film, all I want to say is, “Get Well Soon”. Wait for the film to release and once it does, whatever your views are I’ll respect them. Don’t judge the book by its cover. 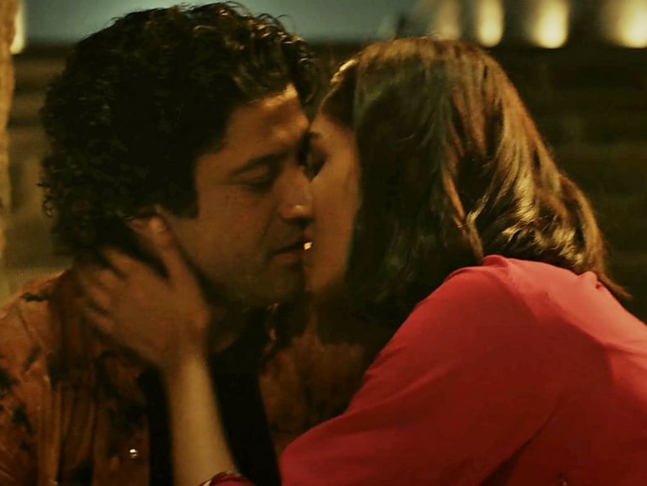 You started your career in films with an international project. Are you looking out for more opportunities in the West?

Of course, I’m looking for more opportunities in the West. I want to feature in French and Spanish films. If there are any Marvel films made, please cast me. With Toofaan getting a global premiere, there will be many filmmakers across the globe who’ll watch it and will be keen on casting Indian actors in their films. So, I’m game for it. I’m proud of Priyanka Chopra Jonas, Freida Pinto, Deepika Padukone, and others for exploring the other side of the world. I would love to go to the West and language shouldn’t be a barrier.

I can be a part of a comedy film or an action film but yeh masala films badi khatarnak hoti hai. Sometimes the plot of the story gets lost and I don’t want to be a part of anything that makes people wonder, “Oh my God, why did I watch this film?” 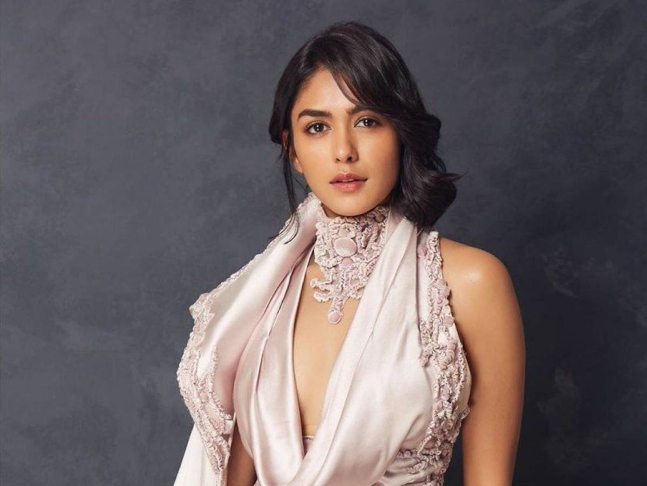 Any plans to return to TV?

Yes, with the help of Toofaan and Amazon Prime Video, I’ll be seen on TV (laughs).