Filmmaker Sriram Raghavan was supposed to shoot for Ekkis with Varun Dhawan last year. However, the COVID-19 lockdown delayed the war-drama that is based on the life of Second Lieutenant Arun Kheterpal. The project has now been scheduled to go on floors in September 2021 considering the film needs specific weather to shoot in battle locations. With the Varun Dhawan starrer not getting into production before the second half of this year, the filmmaker, we heard, is contemplating a new project.

Peepingmoon.com has exclusively learned that Sriram Raghavan is looking forward to produce a web-series based on the Kandahar hijacking by Pakistani terrorist group Harkat-ul-Mujaheddin in 1999 with Saket Chaudhry as the director. Raghavan will be producing the series that will chronicle the horror story of the hijacking of the Indian Airlines Flight AC-814 that forced India to release three Islamist terrorists to secure its 176 passengers and crew of the flight. Raghavan, Saket and their team are said to have started researching the project and are talking to crew members and passengers who were on the flight for their source material. The film is being planned as a taut thriller and will mount next year. The OTT platform for the project is not decided yet. The web show is based on the IC-814 flight pilot Captain Devi Sharan's book, Flight Into Fear: The Captain's Story. The book’s rights have been acquired by producer Sarita Patil who will be co-producing the series with Raghavan. 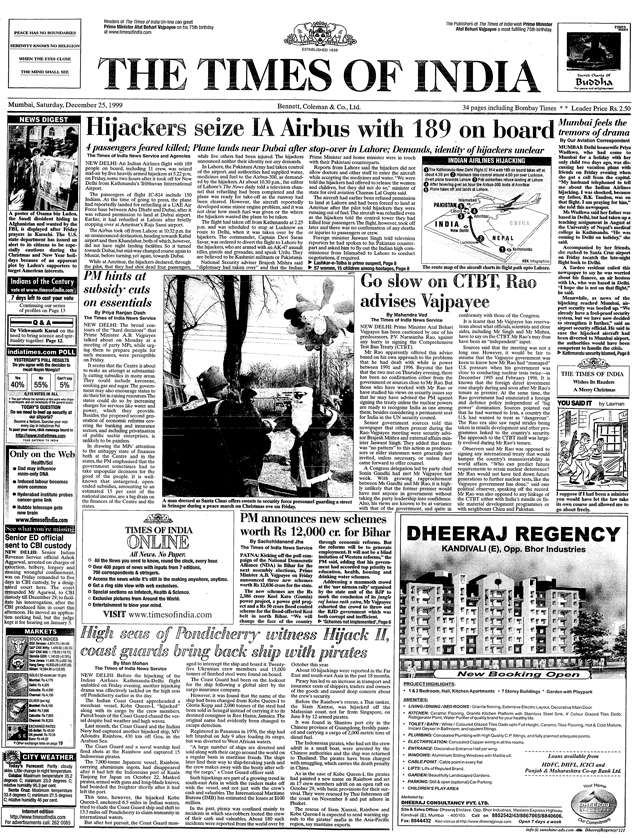 "The Kandahar hijacking crisis brought India on its knees. A blot on Indian history, it exposed India's vulnerable underbelly and questioned the Atal Bihari Vajpayee-led government that failed to handle the crisis. How the terrorists breached the security checks, hijacked the plane and forced the Indian government to fulfill their demands, what negotiations happened with hijackers and how the Crisis management group in Delhi comprising top names goofed up a rescue operation — Sriram Raghavan's web-series chronicles the detailed account of this hostage crisis that kept India awake for seven fateful nights," said a source close to the development adding that Raghavan is currently researching and writing the script and will dive into the production after completing his Varun Dhawan film.

Indian Airlines Flight 814 was hijacked on December 24, 1999, when it was en route from Kathmandu, Nepal to Delhi. The airbus was hijacked by five masked gunmen shortly after it entered the Indian airspace. The terrorists forced the flight to touch down at several locations such as Amritsar, Lahore, and Dubai before finally landing it in Kandahar, Afghanistan which was then ruled by the radical regime of the Taliban. The hijackers released 27 of 176 passengers in Dubai but fatally stabbed one and wounded several others. The crisis lasted for seven days and ended on December 31 after India agreed to release three dreaded gangsters— Mushtaq Ahmed Zargar, Ahmed Omar Saeed Sheikh, and Masood Azhar, who later planned and executed terrorist actions such as, the 2002 kidnapping and murder of Daniel Pearl and the 2008 Mumbai terror attacks.

The Kandahar hijacking has been the subject of a few films in past. Mohanlal and Amitabh Bachchan starrer 2010 Malayalam film Kandahar, Nagarjuna's Gaganam, and Ajay Devgn, Abhishek Bachchan and Bipasha Basu starrer Zameen (2003) were loosely based on this crisis. Moreover, Vishal Bhardwaj had planned to recreate this infamous hijacking on screen in 2014 but the project never took off.