Actress-turned-politician Smriti Irani is one of the fiercest and most articulate leaders of India. She is upfront, honest and brutal and doesn’t fear to call a spade a spade. We may wonder whether she was always this no-nonsense person when she was an actress or did she take on this persona when she became a politician. However, allow Ekta Kapoor to clarify. At a media conclave, Ekta related an incident from the initial days of Smriti’s acting career when she had just begun as an actress for the former’s popular daily soap Kyuki Saas Bhi Kabhi Bahu Thi that spoke volumes about the actress-politician’s demeanour.

Ekta and Smriti had come together to discuss politics, television and shattering the glass ceiling in a male-dominated society at the conclave, when the former related an incident where Smriti had actually made a popular male star apologize for back-slapping her on the sets of the show. Ekta said,” I have to tell you about Smriti and she will hate me for saying this on stage but I have to. Smriti used to be the shiest girl working in Balaji. She was super shy. Smriti was a shy, Delhi girl, quietly sitting, doing her job and going home. But she had these, and as rightly so, certain rules. Like you don't backslap her unless you know her well. I remember this male actor, who was doing really well, comes up to her and says 'Hi baby' or something like that and he back-slapped her. And actually now the industry has realised that you can't do this with a woman even if you are working with her. And I remember, Smriti, for the first time, said to the production, ‘I will not stay on this set. Either this hand stays or I stay.’ And I still remember the men in our office were like 'it's a female-run production house, so bhai aap bahar jaa sakte hai.' We actually asked that male actor to apologize because it's not allowed to cross the line.” 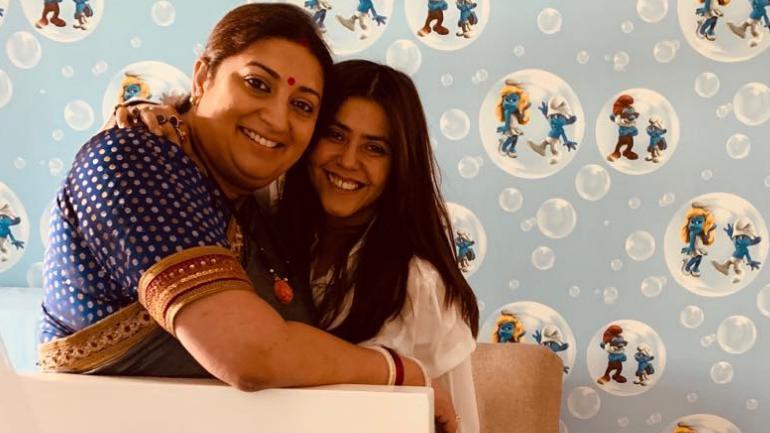 Ekta was prodded further whether she feels Smriti is the same girl when she is in a meeting with Rahul Gandhi, the TV czarina said, “I don't know what to say. I will be politically incorrect and she (Smriti) will catch me later. She is very polite, she is very sweet. I think with Smriti, a lot of men have had to step aside. It has just been the norm."

Now, that’s quite a revelation no? It sure is heartening to know that these two fierce and strong women have been calling the shots and shattering stereotypes ever since they ventured into showbiz.