The Amazon Prime Video backed Unpaused is a collection of five short films that makes a sincere attempt at telling diverse stories with mixed bag impact. The anthology is shot entirely during the lockdown and resonates with our lives during these corona-infested times. The film pays an ode to the human spirit and our ability to make bonds in the most unlikely scenario. Unpaused is like hot soup that soothes our soul on cold wintery or rainy nights and makes us feel warm and cozy. Five filmmakers come together to portray the horrors induced by the pandemic- loneliness, depression, mental health, virtual love, suicidal thoughts, unemployment etc.

Raj & DK’s Glitch starring Gulshan Devaiah and Saiyami Kher is a love story that is not built on physical intimacy. He is a hypochondriac so won’t step out of the house whereas she is a warrior who is willing to put her life on the line to find a cure for the virus. Their love might seem unique but the story fails to draw the audience in. The execution and context are quirky but hardly relatable. NIkkhil Advani’s Apartment stars Richa Chadha, Sumeet Vyas and Ishwak Singh and deals with suicidal thoughts and Me-Too allegations. Sumeet is a hot-shot journalist who is a sexual predator while Richa plays his wife. She blames hi for taking advantage of young girls half his age whereas he turns around and tasks her for not ‘stopping’ him. Richa’s riveting guilt is the interesting aspect of the piece and she feels the only solution to her predicament is death. However, a stranger (Ishwak) rings her doorbell just in time. The story feels like it has been ‘inspired’ by real-life but the writing is pretentious and the short feels forced, thereby lies the problem. Rinku Rajguru and Lillette Dubey star in Rat-A-Tat, directed by Tannishtha Chatterjee is the most refreshing of the lot. The concept is pretty common but is dealt sharply with the right emotional chord. A young tenant (Rinku) seeks refuge in an elite senior citizen’s (Lillette) house after a rat invades her home. The reticent neighbor finally allows her to stay, what follows is a friendship that bridges over class, age and status. Tannishtha’s short is the most relatable as she extracts the best out of her protagonists.

Avinash Arun’s Vishaanu featuring Abhishek Banerjee and Geetika Vidya Ohlyan is a tale about migrant workers stuck during the lockdown. The short feels like an idea borrowed from Parasite as we see the two leads living in a posh sample flat in an under-construction upscale Mumbai high rise, where they have materialistic benefits but no food to eat. The short depicts the financial and class disparity in metropolitan cities. The short tries to show resilience and hope but fails to convey it properly. 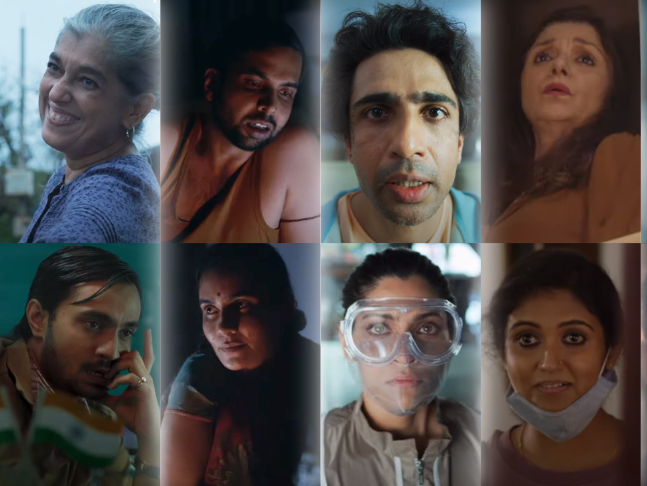 The film’s last short is Chaand Mubarak by Nitya Mehra and is the most effective of all. Starring Ratna Pathak Shah and Shardul Bhardwaj, this one is an emotional roller-coaster ride. An independent, elderly woman and an autorickshawala find themselves in an engrossing conversation that touches on life, family, and society’s expectations, both judging each other on their merit but ultimately realize that despite the class and financial difference they are pretty much alike. Mehra’s short is the best of the lot and is thankfully saved for the last.

Unpaused makes one pause and think whether the world has come closer or the gulf between people widened with the enhanced technology, social media and prejudices. Unpaused makes for an interesting watch.

Shanaya Kapoor talks about judgements that come with 'star kid' tag, says 'I focus on the positives, rest just fades out'

'Will forever be grateful for the love received while playing Naira and Sirat,' says Shivangi Joshi as she bids adieu to 'Yeh Rishta Kya Kehlata Hai'