‘The Crown’ Season 4: Emma Corrin’s Princess Diana makes an appearance in her iconic wedding dress in the trailer

The first official footage of Princess Diana in The Crown has finally been unveiled. Netflix has released the first teaser for the show’s fourth season which starts streaming from November 15. The trailer gives glimpses of Emma Corrin as the late princess. The preview never gives us a clear shot of the ‘people’s princess’ face’ but we get to see iconic moments from her life like her 1981 royal wedding to Prince Charles with the well-known trail to her wedding gown making an appearance as well as in her pink-polka dotted dress worn during the 1983 royal tour of Australia.

The trailer shows Corrin’s Diana from behind on her wedding day as she is ready to walk down the aisle. The Crown’s replica of the real-life trail of Princess Diana’s wedding dress designed by David and Elizabeth Emanuel and paired with a 153-yard veil is extremely impressive as it immediately makes the audience identify the late princess. The trailer also gives a voiceover of how important monarchy is and it just cannot be allowed to fail and shows Gillian Anderson as Margaret Thatcher.

The monarchy. Above all else. @GillianA and Emma Corrin join Olivia Colman in Season Four of The Crown, arriving 15th November. pic.twitter.com/Z4RPvzb32R

RECOMMENDED READ: My true privilege and honour: Elizabeth Debicki roped in to play Princess Diana in 'The Crown' season 5 and 6

Corrin was announced to play Diana in April 2019 and she had said in a statement, “I have been glued to the show and to think I'm now joining this incredibly talented acting family is surreal. Princess Diana was an icon and her effect on the world remains profound and inspiring. To explore her through Peter Morgan's writing is the most exceptional opportunity and I will strive to do her justice!" Her co-star Josh O’Connor, who plays Prince Charles on The Crown has said, “Emma's doing a brilliant job, and it's breathtakingly accurate; she looked the spitting image (of Diana), and it's kind of extraordinary. So that's kind of spooky."

On the other hand, Creator and showrunner Peter Morgan in an interview to an online portal had said that the show will not feature the current crisis of the royal family that entails Prince Harry and Meghan Markle stepping down as senior royals. Talking about their split from the royal family, he said, “Meghan and Harry are in the middle of their journey, and I don't know what their journey is or how it will end. One wishes some happiness, but I'm much more comfortable writing about things that happened at least 20 years ago. I sort of have in my head a 20-year rule. That is enough time and enough distance to really understand something, to understand its role, to understand its position, to understand its relevance. Often things that appear absolutely wildly important today are instantly forgotten, and other things have a habit of sticking around and proving to be historically very relevant and long-lasting. I don't know where in the scheme of things Prince Andrew or indeed Meghan Markle or Harry will ever appear. We won't know, and you need time to stop something being journalistic. And so I don't want to write about them because to write about them would instantly make it journalistic. And there are plenty of journalists already writing about them.” 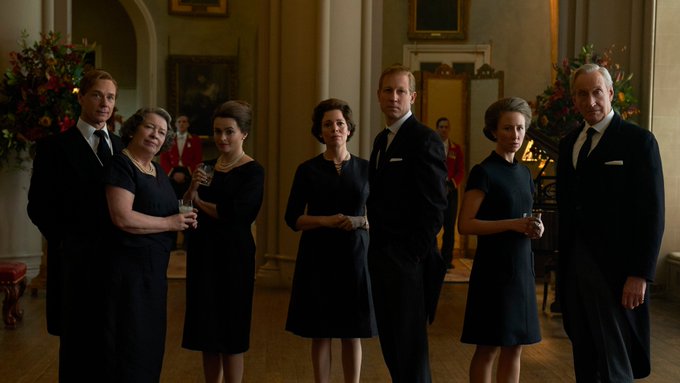 He further added, “To be a dramatist, I think you need perspective and you need to also allow for the opportunity for metaphor. Once something has a metaphorical possibility, it can then become interesting. It's quite possible, for example, to tell the story of Harry and Meghan through analogy and metaphor, if that's what you want to do. Because there've been so many examples in the past, whether it's Wallis Simpson or Edward VII, or whether it's Diana and Prince Charles. There have been plenty of opportunities in the past where there have been marital complications. There've been wives that have been married into the Royal family that have felt unwelcome and that they don't fit in. So there are plenty of stories to tell without telling the story of Harry and Meghan.”

Corrin won’t return after Season 4. In The Crown’s final two seasons, Diana will be played by Elizabeth Debicki. The Crown stars Olivia Colman, Gillian Anderson and Helena Bonham Carter among others.

Ajay Devgn and Dil Raju team up to remake the popular Telugu film, Naandhi, in Hindi