On June 28, 1914, a young Serbian nationalist assassinated the Austro-Hungarian heir Archduke Franz Ferdinand assassinated in Sarajevo, thus starting World War I, one of the global wars that lasted four years and mobilized around 70 million military personnel, including 60 million Europeans, making it one of the largest wars in history. The genesis of the war is far more complicated but the Archduke’s assassination was the trigger that started the war. However, none of these complications and no documented history have made its way to Sam Mendes’ film 1917. 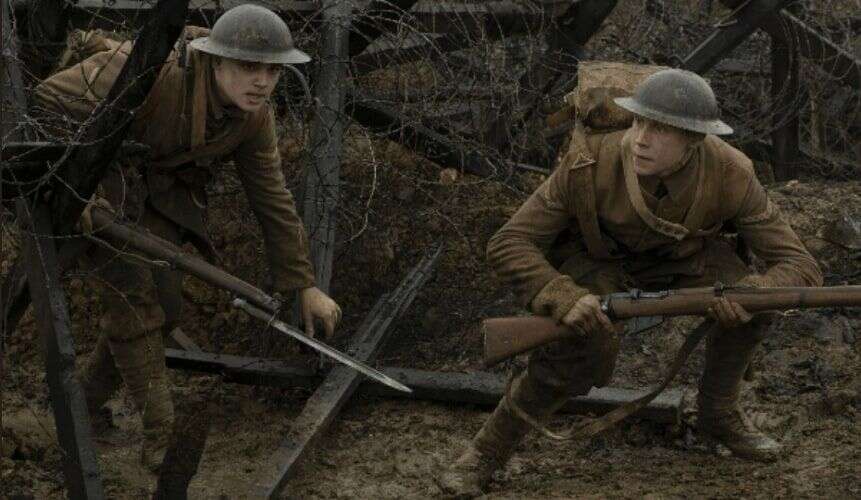 The story introduces us to the protagonists Lance Corporal Blake (Dean-Charles Chapman) and Lance Corporal Schofield (George MacKay), British soldiers stationed in France, who are tasked with delivering a message to the troops at the front line who are about to carry out an assault on the Germans who are said have retreated. However, the British command feels it’s a double-cross trap and is a rumour propagated by the Germans to catch the Allied forces unawares and with their guard down. The protagonists need to carry the dispatch ordering the waiting British troops to stand down and not carry out the assault, thereby saving hundreds of lives. If they fail, then 1600 lives will be lost including Blake’s brother.

The two young soldiers make their way through abandoned trenches, piles of corpses, war-torn villages, raging and turbulent rivers, empty fields and farmhouses and brave German fighter planes and bombs to deliver the ever-important message. However, they are not the only heroes of the film 1917, the cinematographer Roger Deakins deserves as much appreciation and applause as the actors for he has shot the entire two-hour film as if it were one continuous take.  The ‘one-shot-film’ has been done before in cinema and in 1917 it emerges as an immersive drama where we see the two young soldiers attempt to make their way through enemy lines on April 6, 1917 (a noteworthy fact that it was April 6, 1917 when the USA joined the war).

1917 does not show the gory side of war but instead shows the boyish side of the conflict, the generation lost before its time and children robbed of their childhood. Mendes does a great job of making the film seem very personal as the lesser-known actors talk about family, rats, food and honour. Their young faces depict the futility of war, the horrors it brings and the impending death that looms on the horizon. However, the story seems a little lacking which might be due to the single-shot approach. With 1917 another thought gets proven and that is the best special effects a film can have is its special appearances. With acclaimed actors like Richard Madden, Benedict Cumberbatch, Colin Firth and Mark Strong, 1917 becomes a masterpiece as well. With meticulous detail from production designer Dennis Gassner and a visual spectacle from cinematographer Deakins, Mendes’ 1917 becomes a treat to watch. Mendes puts his audience right next to his protagonists making them a part of their ordeal and their anxiety. 1917 is a nail-biting film that will keep you at the edge of your seat and silently pray for the well-being of the two young and reluctant heroes. Mendes dedicates the film to his grandfather, who fought in World War I as we learn from the closing credits. No wonder, this small episode mean so much to him and us as an audience just can’t help but salute the theatrical impact of 1917. The film is an almost war classic and should not be missed.