2019 was a hot-stove for fashion! From seeking inspiration to stealing them, we saw a lot got down on the fashion front. From the release of fresh, new collections to plagiarists creating their rip-offs, a lot of drama unfolded this year. Some labels were critiqued for their culturally inappropriate remarks, while some designs were simply labeled as insensitive!

PeepingMoon.com brings to you all the drama that you might've missed on the sartorial lines:

Recommended read: Elle Germany issues a public apology for implying 'black models' as a trend and misidentifying their cover star on their recent edition 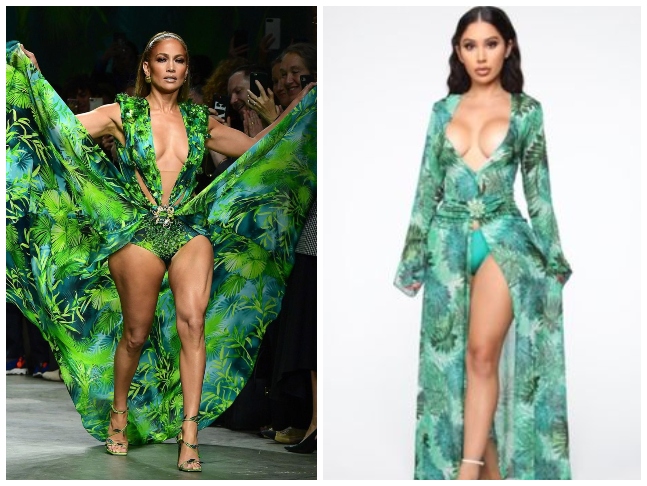 Versace is suing the California company, Fashion Nova for ripping off Jennifer Lopez's iconic dresses. The esteemed label is claiming that the mass-retailer breached copyright rules by knocking off the jungle-print dress along with two other iconic designs - Pop Hearts and Barocco-57.

With this lawsuit, Versace seeks to bring an end to Fashion Nova’s latest brazen attempt at copying the work of yet another famous and world-renowned designer,’ the suit says. Intense, wouldn't you agree?

Fashion Nova has always sought inspiration from the Kardashians for their rip-off ensembles. The reason why, when the mass-retailer created a rip-off of Kim Kardashian's archive Mugler number, we weren't exactly surprised. But what did surprise us, was the timing (within 24 hours of the star's appearance on the red carpet) and the fans alleging Kim's involvement in helping the retailer for the same.

In an attempt to quash those rumors, Kim slapped a lawsuit on the company for creating rip-offs and infringing designs made by various designers. " I don’t have any relationships with these sites. I’m not leaking my looks to anyone, and I don’t support what these companies are doing.", said the diva in a series of tweets.

The company had a statement for this accusation. Have a look:

Fashion Nova is an ultra-fast fashion brand that is capable of executing design within hours and believes in fairness in pricing. We strive to offer our customers affordable leading trends,...We respect the fashion community and work with a variety of vendors, designers, influencers and celebrities to keep our style offering fresh and relevant. Kim Kardashian West is one of the top fashion icons in the world that our customers draw inspiration from. However, we have not worked with Kim Kardashian West directly on any of her projects but have been driven by her influential style.”

Elle Germany and their 'Back to Black' issue

Elle Germany's October 2019 issue garnered a lot of negative publicity for the publication. With racist comments, insensitive themes and other mistakes leading to a big controversy, the publication issued a public apology for the blunders that took place.

From the racist theme, that implied 'black models' as a trend, to misidentifying their white cover star for a black model, the plagiarism reporter Diet Prada laid out some ground facts and strong points for argument.

The very next day, Elle Germany issued a public apology via Instagram. Check out their statement here:

The diva announced the launch of a shapewear range named Kimono. The name itself received major flak from the eastern audience i.e. Japan and Asian countries. While Kim must've have used this word as a wordplay, she got slammed for the insensitive use of the word 'kimono'.

The Kimono-loving Mayor of the Japanese city of Kyoto on Monday sent a letter to American reality TV star Kim Kardashian West asking her to reconsider trademarking "kimono" as the name of her new lingerie brand. Very soon, Kim launched her new line under the name 'SKIMS' and all is well since,... phew!

Tanya Gold: 'The new mannequin is obese, and she is not readying herself for a run in her shiny Nike gear. She cannot run. She is, more likely, pre-diabetic and on her way to a hip replacement. What terrible cynicism is this on the part of #Nike?' https://t.co/51VmvUCxLE

Nike recently introduced plus-sized mannequins at its London flagship store. While many took it as a step forward towards body positivity, a reputed publication lashed out at the name of 'popularizing an unhealthy lifestyle'. Nevertheless, the netizens took care of the situation and supported the brand's cause and reason.

During the London Fashion Week, Burberry showcased a hoodie that had a noose around the neck. Needless to say, this hoodie was not well received by the fashion industry. Marco Gobbetti, Chief Executive Officer of Burberry issued an apology, stating, "We are deeply sorry for the distress caused by one of the products that featured in our A/W 2019 runway collection. Though the design was inspired by the marine theme that ran throughout the collection, it was insensitive and we made a mistake."

Kendall Jenner received major flak after her Pepsi campaign came out. Soon after, Coca Cola released their orange-flavored drink and Kendall was there, in an orange bodycon, sipping on it as the paps looked on. Because her dress matched the drink suspiciously well, internet users began hypothesizing that this might be an advertising scheme.

Diet Prada raised the question, "Was this color harmony a coincidence or have Jenner and Coca-Cola been scheming to skirt around the FTC’s social media advertising guidelines?" Well, what do you think?

Netizens took charge of the swift reactions that followed. While some were 'repulsed', some called it 'unnecessarily provocative'. Well, what do you think?

The fast-fashion retailer has come under fire for sending the diet bars to its customers, most of whom were shopping the brand's plus-size offerings, as a "special promotional offer."

Unimpressed customers took to Twitter to share photos of the unsolicited bar sample that came with their online orders.

I went from a size 24 to 18, still a plus size girl, so I ordered jeans from @Forever21 Opened the package, when I looked inside I see this Atkins bar. What are you trying to Tell me Forever 21, I’m FAT, LOSE WEIGHT? do you give these to NON-PLUS SIZE WOMEN as well? pic.twitter.com/ds8kUTs7T7

While some customers took this action personally, some just called these reactions  'dramatic' and took this move as just another 'promotional gimmick'. What do you think happened here?

Well, that was saucy... what a year indeed!