Chances are you may not remember all of Akshay Kumar’s lengthy, non-political interview of Narendra Modi that broke the Internet on Wednesday, but you will not forget that the macho Bollywood action superstar wore pink chinos to his meeting with the Prime Minister.

Is pink Akshay’s favourite colour? Hardly, but the actor has boldly worn this “feminine” colour in public on three occasions that stand out. The first time was when his bestselling author wife Twinkle Khanna released her book Pyjamas Are Forgiving last September at a function attended by Mumbai’s literati and glitterati. Then on Women’s International Day this year, Akshay wore his pink trousers to a Lucknow marathon held to create awareness about menstrual taboos. And then he wore pink again to 7, Lok Kalyan Marg in the capital where he interviewed the Prime Minister in residence. 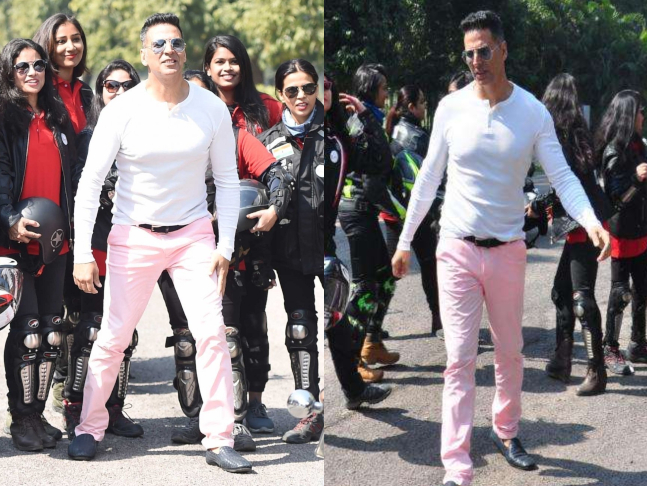 Akshay Kumar at a marathon for menstrual hygine awareness in Lucknow

Recommended Read: It is my nature to lead a proper life: PM Modi tells Akshay Kumar that he has always been ‘careful’ about his appearance
Now Modi is as known for his sartorial elegance as is Akshay himself. So what prompted the actor to combine pink chinos with a white shirt for this exclusive meeting when he could have chosen to wear any formal attire? It couldn’t be just the sizzling Delhi summer because there are several cooling colours for men to wear besides pink. And surely, there must have been some dress code that visitors to the PM’s residence adhere to. Or don’t they apply to Bollywood superstars used to creating fashion trends of their own? 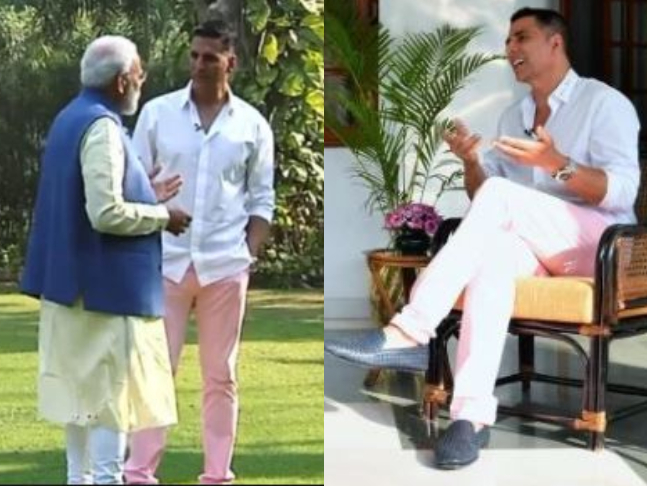 The colour pink has for long been considered a feminine prerogative. It represents friendship, affection, harmony, inner peace and approachability. Light pink is used to communicate tenderness. The American multimedia men’s lifestyle website RealMenRealStyle.com suggests that women like men in pink simply because they’re attracted to the colour. “Forget that pink-is-girly nonsense, pink gets you the ladies,” it advises its men subscribers.

Local fashionistas believe that Indian men are not afraid to experiment with bright colours anymore and have been embracing pink recently. The colour is believed to be empowering and boosts the attractiveness of men who have the courage of their conviction to wear what they please. And among the first Indian men to step out in pink has been Akshay thereby breaking all stereotypical notions about how it is supposed to be a feminine colour.

Recommended Read: From the way Twinkle Khanna targets me, I understand there must be peace in your family life: PM Modi to Akshay Kumar

Coming out strongly in the Kesari superstar’s favour is leading designer Anita Dongre whose fashion line is available under four renowned brands. “Men love colour and pink is very popular with most – and why not! I don’t think Akshay committed a fashion faux pas by wearing pink trousers,” said Anita. A.D Singh, another top designer known for bridal and evening wear, clarified, “Pink is actually a colour which men sport. But it is associated with women because pink looks calm and it’s considered more feminine. But an urban male who has a strong sense of fashion and style would always sport a pink… in a shirt or even in a trouser and it’s not a fashion faux pas!” 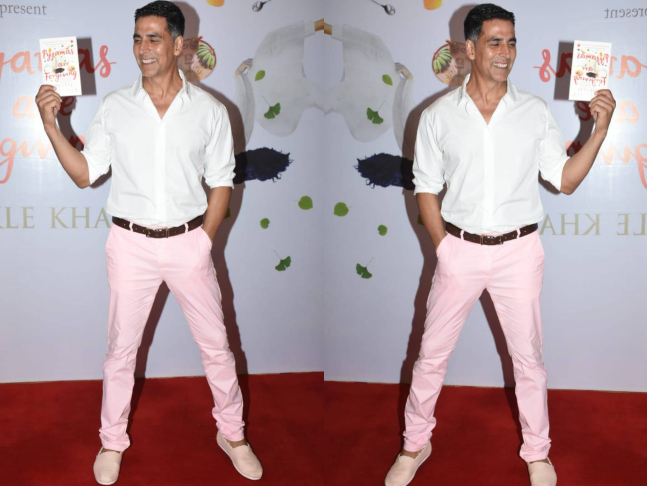 Akshay Kumar at book launch of 'Pyjamas Are Forgiving' in Mumbai

A Bollywood stylist who has dressed Akshay up for films and fashion shows, said, “Not every actor has the b***s to carry off a pair of candy pink trousers as Akshay does. He likes the colour. Don’t you think it was sheer swag on his part to go in this avatar to a meeting with the PM?” Agreeing is Bollywood fashion and jewellery designer Maheka Mirpuri who said, “I think pink for girls and blue for boys is very passé. Donning pink pants and being able to carry them off is uber cool and stylish. If you’re a metrosexual and have the personality to carry it off, why not? I think Akshay totally rocked it in pink pants!”

Pooh-poohing the “western concept that pink is for girls and blue is for boys” is also Wendell Rodricks who is internationally counted among the Top 10 fashion designers in India. “As Indians we wear pink,” said Wendell. “We wear Rani Pink turbans at weddings, floral pink sherwanis by Sabyasachi, and I own pink pants. East is East and West is West. But we are superior to them as we wear our 6,000-year-old clothing legacy with pride till today.”

A National Institute of Fashion Technology graduate revealed that most men have reservations to wear pink as society associates them with pansies. “But asking if men can wear pink is like asking if women can wear blue or black. The answer is yes – there are no gender-specific colours. And there are women who admire men who can carry pink. Hollywood actors have not hesitated to wear pink. From Will Smith to Ashton Kutcher and Brad Pitt to Kanye West, they’ve all pulled off the colour fashionably.” Left to Right: Will Smith,Kanye West and Ashton Kutcher

The final word was left to a diehard (woman) Akshay Kumar fan. She said, “Men who wear pink are confident about themselves, their fitness and their sexuality. And they are not intimidating, pink sends off a non-threatening signal and that makes such men attractive to women. Don’t you think his pink chinos reflect Akshay’s attitude and make him stand out from the rest of the crowd? That’s why he’s known as the Khiladi!”

Asanas performed by birthday star Aashka Goradia that will inspire you