It was only last week that Twitter sent out a warning of suspension to Kangana Ranaut's fiery sister Rangoli Chandel. Now, the actress's account has been suspended for violating Twitter rules. It all started when Rangoli received a warning from Twitter after which she slammed the social media platform for being an anti-national. Rangoli wrote, “So is this Twitter anti-national … When I joined Twitter, people said that it is dead, go to Insta. If Twitter suspends my account, it is going back to the same cemetery where it was and that happens when you turn off an honest voice."

Rangoli also took a dig at Twitter. She wrote, "What does Twitter want from us, let us say good morning … Is it the early morning, let’s drink tea … Here is the picture of my tea. Who has time for all these idiots … We have a lot more to do than having a kitty party here." 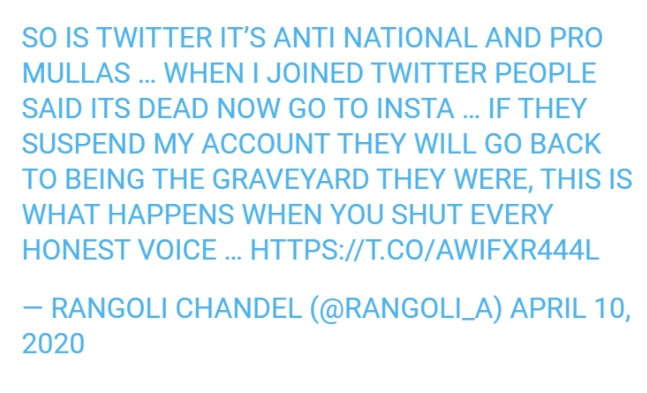 Recommended Read: Rangoli Chandel shares adorable throwback picture of Kangana Ranaut dressed as Sita from ‘Ramayan’, says ‘she got a lot of scolding from papa’ Rangoli is known for her straightforward attitude and unaltered opinions. She never shies away to share her viewpoint on several topics, from films to politics.