From Amol Palekar to Nawaz: Sridevi’s leading men over the decades

In the course of her career spanning 50 years, it stands to reason that Sridevi has been paired with a plethora of actors. From Jeetendra, Amitabh Bachchan, Rajesh Khanna, Rishi Kapoor to Anil Kapoor, Salman and Shah Rukh Khan and Akshay Kumar, and up to Adil Hussain, Nawazuddin Siddiqui and Akshaye Khanna—she worked with several generations of heroes.

Her Hindi film debut, Solva Sawan saw her paired opposite the unlikely Amol Palekar. He played her mentally retarded, lame cousin, who secretly loves her. Due to upheavals in her love life, she begins to encourage him to defend himself against those who mock him. Eventually, he ends up killing her would-be-rapist, is arrested for murder and eventually comes back to her, as she awaits his return.

Palekar recalls it being “an absolutely fascinating experience.” He shares that he and Sri forged a good friendship. “She was extremely young, and I still remember how shy and guarded she was, as she was not very comfortable speaking English.” Every evening after the shoot, the two would chat away, as she shared anecdotes from her South Indian films, working alongside actors like Kamal Haasan and Rajinikanth.

Her onscreen chemistry with Jeetendra guaranteed box office success. The duo came together in a slew of mass entertainers, as they virtually launched a small yet successful parallel industry. They delivered as many as 18 films including super hits like Himmatwala, Maqsad, Justice Chaudhary and Tohfa. These films helped Sri find a footing in Bollywood after the not-so-great reception that Solva Sawan received. “She was an actor par excellence. What was even more admirable about her was her dedication to the craft – she would keep rehearsing a scene until she was fully satisfied with it. I had deep admiration for her discipline towards her work,” is how Jeetendra remembers his co-star whom he was very close to. 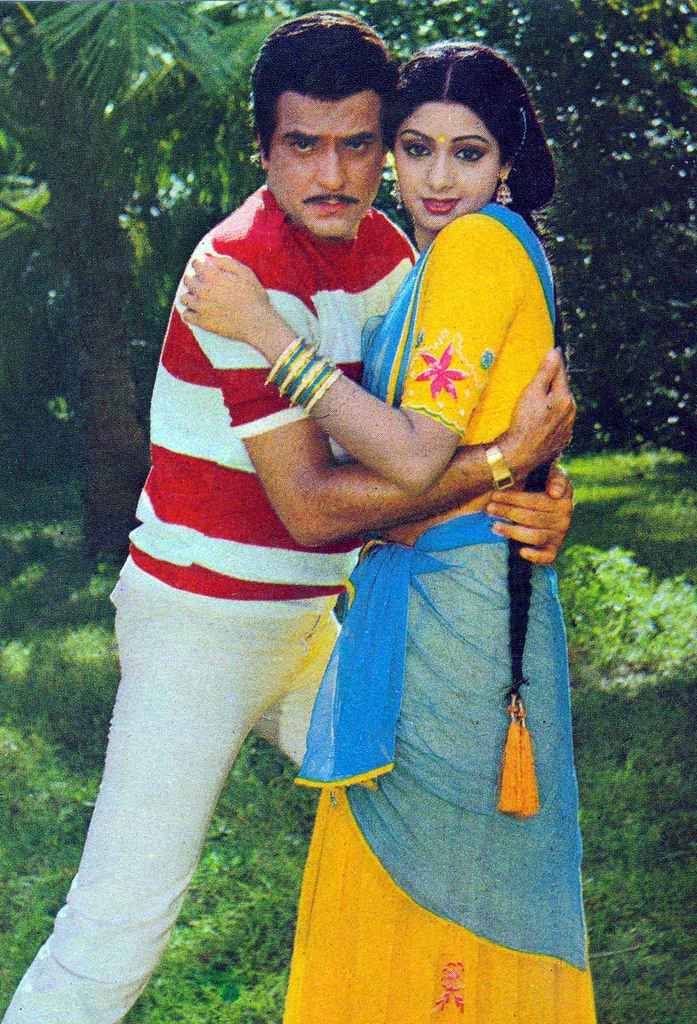 Sri’s pairing with Anil Kapoor, whose elder brother Boney she went on to marry, was both playful and electric. Through the ’80s and ’90s, they starred together in no less than 13 films together. They were cast opposite others in Subhash Ghai’s Karma in 1986, but were soon brought together by Shekhar Kapur in the now iconic Mr India. Their comic timing was impeccable, while their searing vibes in the song “Kaate Nahi Kat-Te” absolutely scorched. The duo went on to co-star in films like Ram-Avtar, Sone Pe Suhaaga, and Joshilaay, till they gave their best performance together in the 1991 film Lamhe. Post this, they starred in the hugely expensive and ill-fated Roop Ki Rani Choron Ka Raja (1993), followed by Laadla (Sri had replaced Divya Bharti after her untimely death), and Judaai (1997). It was their last film together. 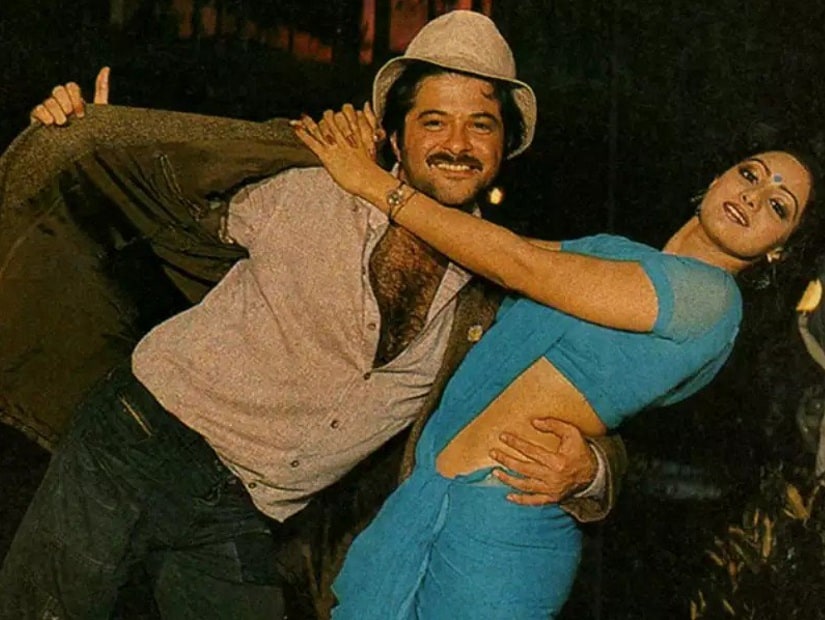 “Henceforth no more moonlight nights! Chandni gone forever. Alas!” Rishi Kapoor reacted to the news of Sri’s passing with a brief yet moving comment. They had won audiences’ hearts with their pairing in a slew of films including cult classic Chandni, Nagina, Gurudev, Banjaran and Kaun Sachcha Kaun Jhootha. One interesting observation he shared was that after every two, or maybe three shots; she would remove her makeup, and do it again. “I never understood the reason, but I think she always wanted to give her best, let her work to speak and also, look gorgeous. And it was not a mere touch-up, but removing makeup from her nose and cheeks and then applying putting it again. Also, she didn’t have any makeup man back then. She put in great efforts to look good and perform well.” 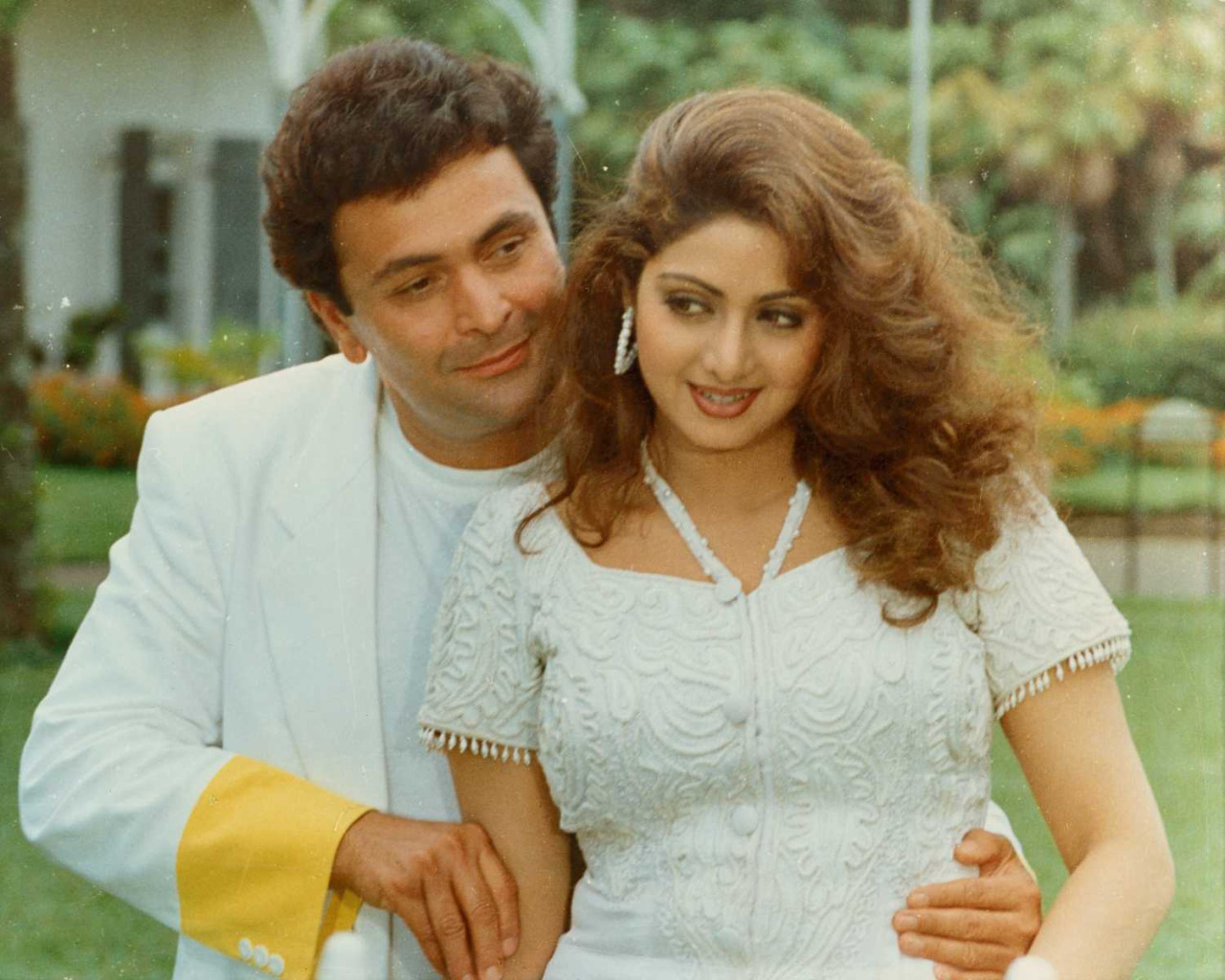 Amitabh Bachchan and Sridevi were the No. 1 stars of the time, and yet did just three films together. On second thoughts, that could be the reason they did such few films together – they were probably each too big for the screen to encompass them together! The pair starred in Inquilab (1984), Aakhri Raasta (1986) and finally, the best of the lot, Khuda Gawah (1992). Decades later, they came together – albeit briefly – in English Vinglish (2012). Sridevi also had a successful pairing with Rajesh Khanna in films such as Naya Kadam (1984), Maqsad (1984), Masterji (1985) and Nazrana (1987). In fact, during the shooting of Maqsad (1984) Rajesh Khanna along with Jeetendra tried hard to break the ice between Sridevi and Jaya Prada during the shoot. They locked the two actresses up in a room in order to get them to talk – when they finally opened the door to the room, there were the two ladies sitting silently in their respective corners! 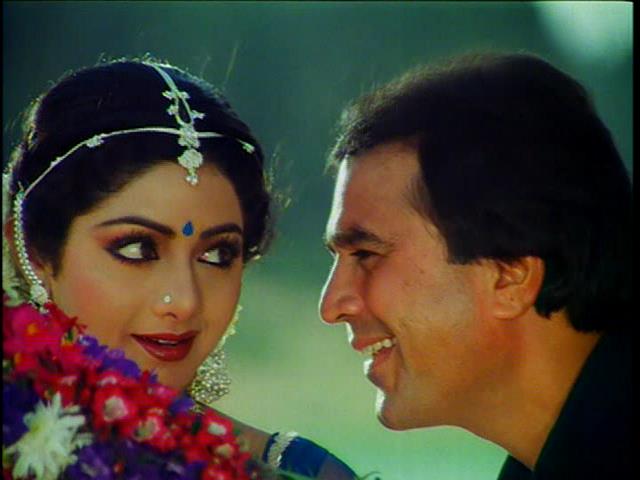 The list of leading men goes on… She starred as heroine opposite both Dharmendra and his son, Sunny Deol. She also starred with Shatrughan Sinha in several films including Sherni, Jawab Hum Denge and Chaan Ka Tukda. Their pairing was admired for their vibrancy onscreen. With Mithun Chakraborty she went on to form one of the most sought after onscreen pairs. The co-starred in films such as Jaag Utha Insan, Watan Ke Rakhwale, Waqt Ki Awaaz and Guru, till personal issues ensured they never came together again. While Sri and Shah Rukh first teamed up in the commercial hit Army (1996), buzz goes that she will be seen in a cameo in Khan's upcoming Zero. She even made a fairly successful pairing with Salman Khan in Chandra Mukhi and Chaand Kaa Tukdaa. Why even Hrithik Roshan made his acting debut opposite Sri – as a child artiste! He recalls giving his first ever acting shot with Sri. “I was nervous in front of her and I remember her shaking her hands pretending to be nervous cause of me, just to boost my confidence,” he recalls.

Last year, at the time of her last release, Mom, Nawazuddin Siddiqui had shared, “I was always her fan. Big fan. Srideviji has always been my favourite actress. When I got a chance to work with Srideviji in Mom, I couldn't believe it. It was more than a dream come true. As an actor, I couldn't hope for a more favourable situation. It's my good fortune that I got to share screen space with her.” Little did he know just how fortunate he was…