Rubina and Abhinav celebrated Karwa Chauth and this year, it was indeed special for them. Aly acted as Jasmin's strongest pillar and was guiding her to play well. He was seen bonding with other housemates.

- The episode began with Aly telling Jasmin to not push Pavitra to win the captaincy. Pavitra and Jasmin tried to make a pact, but the former clearly refused saying she wants to become the captain so that she can send Eijaz to the red zone. However, when the task began, Jasmin managed to push Pavitra out of the orbit and became the captain. Bigg Boss congratulated her. Aly told Jasmin to make sure Pavitra doesn't go back to the red zone.

- Rubina wasn't happy with the fact that Pavitra pushed her husband Abhinav out of the orbit even after a discussion. She claimed that Jasmin and Pavitra conspired against him to become the captain.

- After the housemates woke up to the song Cutie Pie, Aly and Nikki had a fun conversation about 'stealing' coffee. When she went, Aly told Jasmin that he finds Nikki cute. Jasmin openly said, "I don't like her. You better don't like her too."

- Jasmin then distributed household duties among Pavitra, Nikki, Abhinav, Jaan and Eijaz. Jaan refused to take up the duty of cleaning the living room. Later, Aly told Jaan that his personality isn't to be seen on the show and he went to Rahul and discussed it with him. Rahul told that he tries hard to make friends.

- Pavitra shared her feelings with Aly and told him that she was upset with Shardul. As they continue talking, Jasmin interrupted and had a heated verbal spat with Pavitra. The latter told Jasmin to not be possessive about Aly as he is her friend too. When Pavitra left, Jasmin told Aly to not be influenced by what Pavitra said.

- Abhinav asked Rubina whether she is observing Karwa Chauth fast. She said she won't be eating anything till night. Abhinav asked her why didn't she have sargi. In response to this, Rubina said it wasn't possible inside the Bigg Boss house. They shared a romantic moment.

- Bigg Boss announced a task for the red zone contestants that gave them a chance to redeem their immunity. Jasmin was given the power to choose any three contestants for the task. She named Rubina, Naina and Shardul. Rubina selected Abhinav to play for her while Naina named Nikki and Shardul picked Pavitra. The three contestants had to hold a triangle frame with one hand. The one who kept it holding till the end was declared as the winner. After holding it for a long time, Bigg Boss asked Nikki and Pavitra to not do an elbow lock.

- Nikki was the first one to leave the triangle. She apologised to Naina and cried. Abhinav was announced as the winner and Rubina returned to the green zone. She called it the best Karwa Chauth gift from Abhinav. He went on to salute Pavitra's spirit and strength.

- Rubina broke her Karwa Chauth fast after seeing the moon and husband Abhinav's face through a sieve. Abhinav quipped that he never imagined that they would celebrate Karwa Chauth inside the Bigg Boss house. 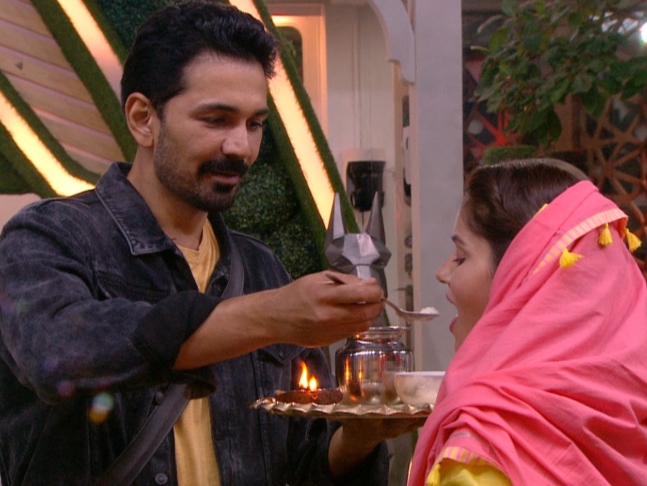 -Eijaz went to Shardul and shared his pain. He complained about Jasmin and her behavior as a captain. He told Shardul that Jasmin called him 'pagal'. He said he shouldn't have spoken about his depression.