Bigg Boss 12 Written Update Day 99: Christmas was not merry for Surbhi and Sree 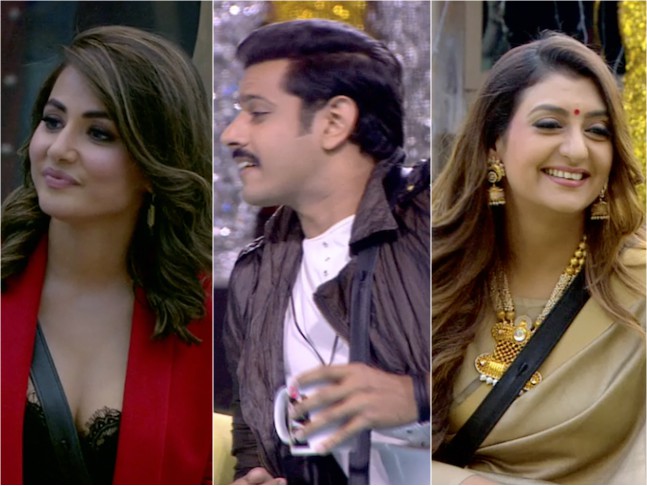 And finally it’s Christmas, hope you guys had a fun and were showered with all those favourite gifts. In the house, Bigg Boss too had a special plan as he turned Bigg Boss house into a hotel and housemates into stewards. Hina Khan, Juhi Parmar and Neil Bhatt entered the house and KV and others were at their service. However, nothing really ran smooth as Sree acted mean to Surbhi and she broke down. Like I say Drama in BB house never ends.

It was, as usual, a peppy morning in true blue Bigg Boss style. Dipika and Surbhi hugged each other and buried their differences. KV read out the task in which the house would be turned into a hotel room and housemates would be turning into stewards who would serve the guest as they visit. Surbhi turned moderator and Sree became the guest. He threw a bit of fit for fun and housemates played along.

Hina Khan entered the house and looked for a challenge for the housemates. She asked them who was the laziest of them all. As Romil’s was the popular choice he was asked to clean the kaalkothari. Next was Deepak’s turn, and Hina asked him to remove his clothes and get into the pool. Deepak then sang a song for her and she was impressed. Hina gave a piece of advice to the housemates and said that only popular people get trolled. She asked them to give their best in the last week of the show.

Hina then challenged Deepak to do squares which he was unable to do. Hina then asked Surbhi to shave off half of his beard. Hina then asked KV to curl his hair. She asked Deepak to give her a foot massage. Dipika and Surbhi get into an argument over the mattress. Surbhi insisted on using her power but the housemates disapproved. Hina voted for Romil as the best performer and he got a chance to make a vote appeal to viewers. Karanveer became the next guest in the house. Housemates couldn’t stop laughing at his hair. Juhi Parmar entered the house as her Sumati Khanna, the character she plays in her show.

She asked Romil for a cup of coffee, KV uses his power and asks him to make one for himself also. Juhi got irritated and punished Romil. Juhi asked Romil to give three reasons why Surbhi could win the show. Listening to Romil’s reasons Surbhi got emotional. Juhi asked Surbhi to give a hug to everyone. Juhi crowned Sree has the star of the batch for the way he embraced his role from the beginning. Sree appealed viewers to vote for him.

Deepak was the next guest. Neil Bhatt to entered the house. Deepak asked Surbhi to serve Sree a cup of tea in the mug which came from his family on Christmas. Surbhi tried to convince Sree to have the tea but he strongly refused to give the mug. Sree listed out all the things that Surbhi did to irritate him. Surbhi too listed the things and the two get into a bad argument. Sree took it a bit too far when he said mean things to Surbhi and called her fake and how she did things only for the cameras. Surbhi broke down after listening to him.

Dipika who had hugged Surbhi and buried her differences with her in the morning also refused to support Surbhi and said that she had never maintained relations with anyone. Sree added that Surbhi always got personal during an argument. Surbhi was left alone.

Romil got lucky second time as Neil crowned him the winner. Romil once again made a vote appeal.