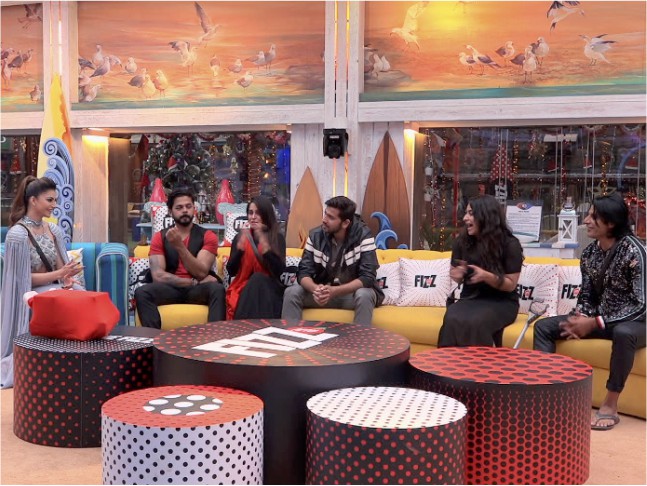 Merry Christmas guys! The holiday season has finally begun and hopes you are soaking in the festive fervour. The Bigg Boss house was not lagging behind in making the Christmas merrier but like always there was a slight twist to the celebration. Bigg Boss decided to give a secret task to Deepak, Surbhi and Sreesanth. This created chaos and confusion in the house. While some understood that this might be a task, Dipika and Sree took it way too seriously and were not in a mood to forgive Surbhi. Talk about some people not knowing to soak in festivities.

Here’s all that happened in the house tonight:

The housemates woke up to “Urvashi” song. An argument broke between Dipika and Sree as she spoke about his journey and the changes in him. Sree got upset with her as she pointed towards his about task performance. Dipika objected to his tone and walked out. Surbhi who eavesdropped into the conversation while working out on the trade mill said that Dipika should have understood this much early. Deepak, Sree and Romil were generally talking when Romil said that KV was actually not Mahan and compared him he was genuinely more generous.

Sree enacts as a host of a fictitious show “The Real Show.” Romil questioned Surbhi about her statement of going domestic in the final week. An argument broke between them. Sreesanth and Dipika also questioned her and Surbhi broke down. KV asked Surbhi to leave the conversation if she was not feeling comfortable. Sree objected to KV and Sree called him a criminal. An argument broke between KV and Sree.

Bigg Boss called Deepak and assigned him a secret task. Bigg Boss told him that he would call him time to time and instruct him about his next move over the phone. If he managed to do the task housemates would get Christmas gifts sent by their families. Romil shows the shoes KV kept on Romil’s bed which led to a mild argument. Deepak got a call from BB. He was asked to hide Deepak and Shohaib’s picture frame and Romil’s turtle bag and convince housemates that KV had taken it. Deepak started shouting that his trophy that he got for winning Sultani Akahada was missing. Romil asked him to check everyone’s bag. He went and told KV that his ring was missing, KV said he kept in the bag. He then told Romil that his ring was missing. Deepak tried convincing Romil that his son’s bag was also missing. Romil asked him to swear that he had not taken his bag. Dipika realized that her frame was missing. Deepak said that KV must have hidden it. Everyone tried to find the things. KV found Dipika’s frame in the bed drawer. KV  got upset with Deepak for blaming him. Romil and Deepak start to search for things. Romil finally found the bag in KV’s cupboard.

Bigg Boss then asked Deepak to give the phone over to Surbhi. Surbhi and KV suspected that Deepak was given a secret task. Surbhi got a call and was asked to make Dipika cry and Sree reacts to it. Surbhi started to taunt Dipika and Sree enters the argument. He started calling her fake and duplicate. Dipika got livid at Dipika and yelled at her. Sree comes down aggressively on her and Romil and KV tried to stop her. Surbhi called Dipika a bad actor. Surbhi then felt bad and explained herself on the camera. Dipika finally started crying. Surbhi was then asked to give the phone to Sree. Sree got upset and shouted in the garden area. He called Surbhi most disgraceful lady he has come across. Surbhi tried to talk to Surbhi and he asked her to stay away. Sree asked Bigg Boss that he wanted to meet a doctor. Dipika was angry over Surbhi for calling her a failed actor and said she wanted to slap Surbhi. Surbhi tried to give the phone to Sree and explain that it was all a secret task.

Surbhi finally managed to give the phone to Sree. Bigg Boss called him and said that he will dance while talking to everybody. Bigg Boss revealed the secret task to Deepak and Surbhi and said that since they were all successful they will receive gifts from their families. He lauded Surbhi and said that she was given the most difficult task and since she did it effortlessly a party has been organized for housemates. Surbhi explained her stance and Sree called her a sadist. Surbhi went and spoke to Dipika but she was in no mood to forgive her. Dipika said that though she had nothing against her but Surbhi went a little too overboard with things and shouldn’t have spoken about his profession.

Urvashi Rautela entered the house. She brought the gifts that had come from the families of the housemates. Bigg Boss treats the housemates with Pizza.

As the finale is drawing closer who is your favourite contestant that you are hoping to win? Leave your comments below and keep reading this space to know what happened in the house.