Advertisement
HomeWEBCASTWebcast ReviewsBig Shot Review: John Stamos' series is high on girl power as it celebrates their triumph on a basketball court

Disney’s latest television series Big Shot brings home the trials, tribulations and triumph of a High School Women’s Basketball team with a coach who finds his life taking a different turn when he is ousted from his job in the NCAA and is made to take up coaching for the elite girls school team. Starring John Stamos in the lead role, Big Shot is not only about basketball and winning-and-losing on court but also traversing through lives and making teenage girls realize their potential.

Stamos plays a hotheaded men’s basketball coach called Marvyn Korn who must take a job at Westbrook School for Girls, a private all-girls high school after he is fired from his job at NCAA for throwing a chair at a referee. In his new job, he must put in his best efforts to redeem what’s left of his career and reputation. However, he must redefine his approach towards coaching as the girls cannot be pushed around easily and can be won over only by empathy, compassion and understanding. At first, he sees the coaching job as a pitstop on his road back to college ball but soon realizes that he needs to be the best coach he can be for the girls. The girls do not take themselves seriously as a team and the Westbrook community including the faculty is hostile towards Korn. However, the unemotional and stoic Korn with some guidance from his Assistant Coach (played by Jessalyn Gilsig) learns that the teenage girls are complicated human beings who require more than just tough love and training. Korn wins them over with real mentorship, guidance and genuine care. By taking care of the girls and trying to connect with them, Korn eventually starts to grow into the man he always wanted to be, and the father he never had. On the other hand, with Korn’s tough yet compassionate handling, the girls come into their own, not only on court but also off it.

Stamos, as Korn fits the character to the T. He looks tough, stoic, a bit clueless yet approachable and affable. Leading from the front, he makes the series an interesting watch. Unlike other actors who have played similar roles in sports film (the whole fall from grace trope has been explored in films like The Mighty Ducks, Chak De etc), Stamos’ Korn neither shouts nor is too strict. He is not there to break the players but instead help them achieve their best game and that makes a welcome change. Jessalyn Gilsig plays the perfect assistant who mediates between Korn and the girls. She is astute, firm and determined, not shying away from goading or coaxing Korn in doing the right thing and even berating him when the time comes.

The girls Nell Verlaque, Tiana Le, Monique Green, Tisha Custodio, Cricket Wampler, Keala Settle, Emery Kelly keep the pace of the narrative intact with their on court and off court antics. Sophia Mitri Schloss as Korn’s daughter Emma has a definite screen presence and holds her own in the series. Yvette Nicole Brown as the no-nonsense dean of the high school has great chutzpah and brings some sense of humour with her sharp and witty one-liners. 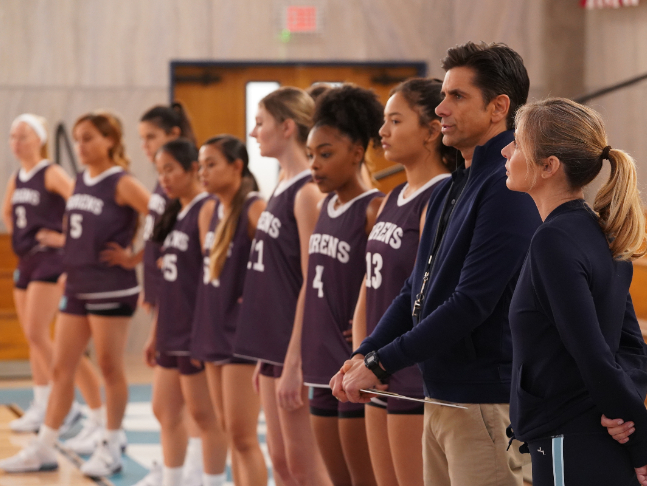 The direction does not falter and give way to frivolous pursuits and problems of a high school nor does it make a caricature of the teenage girls, which is often seen in such films or series. Big Shot makes a welcome change as it brings a basketball story focused on teenage girls’ team, not to say Stamos proves to be a big draw for fans that would be glad to see him in the spotlight once again.

(Big Shot is a 10-episode series directed by Bill D’Elia and Viet Nguyen. This review is based on the first three episodes of the series).