After the US Supreme Court struck down the universal right to abortion in the country, several Hollywood actors, singers and celebs have expressed their outrage and anguish at the ruling. They called it an extremely bad time to be a woman in America and said that ‘guns have more rights than women in the US’. They even said that this ruling has taken American society back by ages and called it extremely regressive.

Michelle Obama, Selena Gomez, Taylor Swift, Halle Berry, Alyssa Milano, Padma Lakshmi, Phoebe Bridgers, Lilly Singh, Billie Eilish, Phoebe Dynevor, Viola Davis, Rosario Dawson and others criticized the Supreme Court’s decision saying that they have taken away the right of a woman over her own body and reproductive system. They called the ruling as not “pro-life” but against women’s lives. Check out their posts below:

RECOMMENDED READ: Nick Jonas says Priyanka Chopra Jonas 'was a rock the whole time' while daughter Malti Marie Chopra Jonas was in NICU for over 100 days

I’m absolutely terrified that this is where we are - that after so many decades of people fighting for women’s rights to their own bodies, today’s decision has stripped us of that. https://t.co/mwK561oxxl

Watching a Constitutional right be stripped away is horrific. A woman should have the right to CHOOSE what she wants to do with her own body. End of story.

Please support @ppact- I am fearful of what will happen to those without the necessary means to have access to a safe, legal abortion. https://t.co/5hK6FGeGlA

I’m outraged! What the supreme court has done is BULLSHIT. Something has to be done! Guns have more rights than women.

Stop this war on women & keep your laws off of our bodies. We have to ban together & NOT accept this! We can’t just post about it, we must DO SOMETHING about it

Today’s Supreme Court ruling overturning #RoeVsWade will have deadly consequences, with the harm falling hardest on people of color who already face disproportionate discrimination in our country and grapple with a severe maternal mortality crisis.

People will still get abortions.

This will only prevent safe, legal abortions from taking place.

And so it goes….Gutted. Now more than ever we have to use our voice and power! WE the people……https://t.co/8gFi0AbNSQ 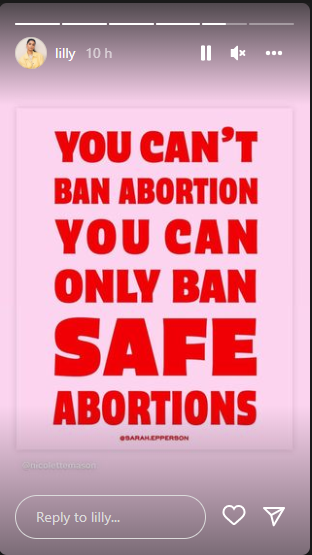 Phoebe Bridgers made no bones about her feelings during her set at the Glastonbury Festival in England on Friday. "In all honesty, (the festival is) like super surreal and fun, but I'm having like the shittiest day," the 27-year-old artiste told the crowd. "Are there any Americans here? (Who want to say) 'F*** the Supreme Court' on three?," she shouted before leading a chant of "F*** the Supreme Court!" She concluded: "F*** that shit. F*** America. Like, f*** you. All these irrelevant old mother******s trying to tell us what to do with our f***ing bodies." On Friday, she tweeted simply "F***ing evil", with no need to spell out what she was referring to, and added a link to the Mariposa Fund abortion-care providers.

Billie Eilish, who became the youngest singer ever to headline at the 50-year-old Glastonbury Festival in England, used her set to protest the US Supreme Court's decision to end the constitutional right to abortion. "Today is a really, really dark day for women in the US," the 20-year-old pop star said from the iconic Pyramid Stage. "I'm just going to say that because I can't bear to think about it any longer," she added. 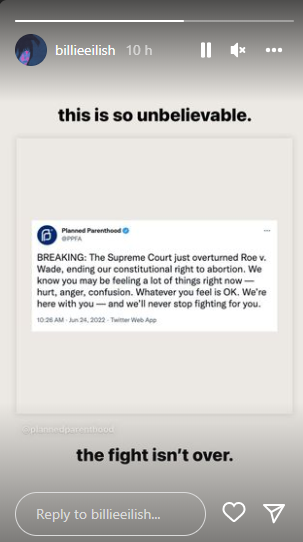 The US Supreme Court on Friday ruled in favor of a strict Mississippi abortion law, in the process overturning Roe v. Wade, the landmark case that has been the basis for legal abortions across America for nearly half a century. The ruling will result in an almost immediate ban on abortions, with some exceptions, in most conservative Republican-governed states in the US. The verdict was given by six conservative judges, including five men, voting to effectively strike down constitutionally protected right to abortion. Three liberal judges including two women dissented in the ruling.

The US court in its ruling said individual states can restrict or ban the procedure themselves. "The Constitution does not confer a right to abortion. The authority to regulate abortion is returned to the people and their elected representatives," the court said in a 6-3 ruling as quoted by news agencies.