Advertisement
HomeHOLLYWOODNews ‘Am so much more than that reference photo my sisters showed their plastic surgeons,’ says Kim Kardashian as she roasts her entire family and ex-husband Kanye West on SNL

‘Am so much more than that reference photo my sisters showed their plastic surgeons,’ says Kim Kardashian as she roasts her entire family and ex-husband Kanye West on SNL 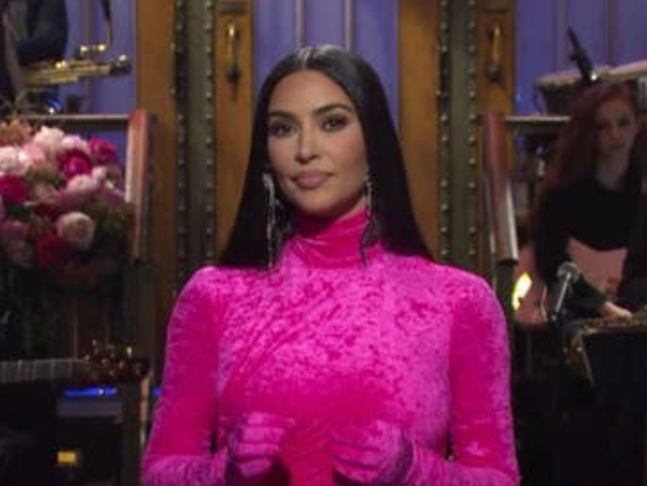 Kim Kardashian joked about her divorce from rapper Kanye West and her family's failed political ambitions during her opening monologue on Saturday Night Live. She also went ahead and roasted her family highlighting their idiosyncrasies. The 40-year-old star filed for divorce from the rapper in February and quipped during her opening monologue while hosting Saturday Night Live that she had separated from him because he wasn't charismatic enough. Kim shares children North, Saint, Chicago and Psalm with Kanye.

She said, “I mean, I married the best rapper of all time. Not only that, he's the richest black man in America, a talented, legit genius, who gave me four incredible kids. So when I divorced him, you have to know it came down to just one thing: his personality." Kim added, "I know it sounds mean, but people keep telling me that comedy. And if there's one thing I strive to be, it's genuine."

She also poked fun at the political aspirations of both Kanye and her stepfather Caitlyn Jenner, reports femalefirst.co.uk. Kim said, "Now I know we're divided as a country, but I'd love America to come together, which is why I'm here to announce that I'm running for...I'm just kidding, guys! I'm not running for president. We can't have three failed politicians in one family."

The star also joked about her famous curves during the opening to the show. She said, "I'm excited to be here tonight to show you guys that I'm so much more than just a pretty face and good hair and great makeup and amazing boobs and a perfect butt. Basically, I'm just so much more than that reference photo my sisters showed their plastic surgeons."

She poked fun at her own infamous sex video and opened up the monologue by alluding to it and said, “I know, I’m surprised to see me here too. When they asked I was like, ‘You want me to host? Why? I haven’t had a movie premiere in a really long time. Actually, I only had that one movie come out, and no one told me it was even premiering.”

However, the biggest reaction from the audience was the ones about OJ Simpson, who Kim's father Robert Kardashian famously defended during his murder trial. She said, “I credit (my dad) with really opening up my eyes to racial injustice. It’s because of him that I met my first Black person. Wanna take a stab in the dark at who it was? I know it’s sort of weird to remember the first Black person you met, but OJ does leave a mark…or several, or none at all, I still don’t know.”

She also complimented herself on not being a gold digger but took a sly dig at her mom Kris Jenner’s boyfriend and said, “But the one thing I’m really proud of is that no one could ever call me a gold digger. Honestly, I’m not even sure how you become one. So I asked my mom’s boyfriend Corey.”

Kim even had a little burn for SNL, comparing the show's relatively small audience to her gigantic platform. She said, “I’m so used to having 360 million followers watching my every move. And I mean, how many people watch SNL, like 10 million? So tonight is just a chill, intimate night for me.”