The recent killing of an African-American man, George Floyd has not caused an impact just in the United States of America but all over the world as well. Many countries, including India, are speaking up against the racial injustice and showing support towards the ‘Black Lives Matter’ movement.

Many B-town celebrities like Priyanka Chopra Jonas, Kareena Kapoor Khan amongst others, voiced their opinion about the same. The latest to join the bandwagon was actress Tamannaah Bhatia.

Tamannaah shared a picture of herself with a black-painted palm slapped right across her face to send out a solid message against racism. “Your silence will not protect you. Doesn't every life matter, human or animal? Muting any form of creation is against the universal law. We must unlearn and learn to be human again, express compassion, and practice love. #AllLivesMatter #WakeUpWorld,” read her caption. 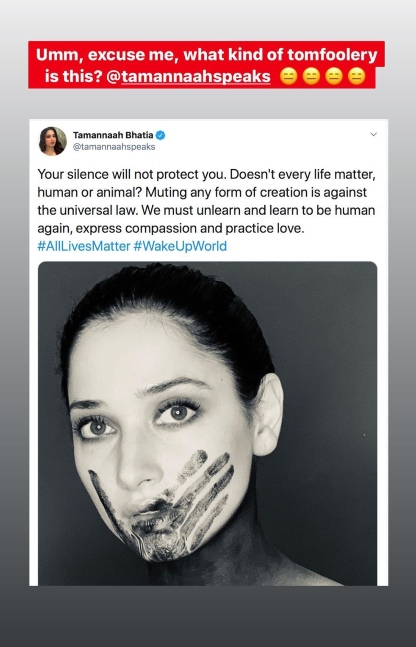 However, this did not go down well for her as expected. Anonymous fashion police, Diet Sabya called out the Bahubali actress for ripping of aesthetics from Missing and Murdered Indigenous Women (MMIW) movement. 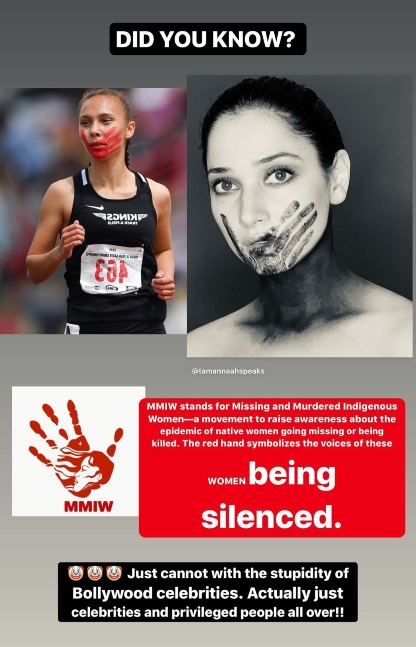 The MMIW movement was started to raise awareness about native women going missing or murdered. This initiative features a red palm instead of black, symbolizing the women being silenced.

Inspired aesthetics or a mere blatant copy? What are your thoughts on this?