The death of an African-American man George Floyd has triggered social and political unrest amidst the pandemic situation. Along with civilians and activists, the fashion fraternity has also stood up against the deep-rooted racism. Many brands rose to the occasion and pledged contributions to the ‘Black Lives Matter’ movement. However, some of them have been called out for their racist actions in the past.

Instagram’s infamous yet anonymous watchdog Diet Prada, has recently lent its support to those who have been calling out the high-end fashion labels that have posted solidarity messages but refused to act on it prior.

Celebrity stylist @JasonBolden called out French luxury brand @Celine for performative #BlackLivesMatter solidarity. Bolden, who dresses some of Hollywood’s brightest Black talents like Cynthia Erivo, Taraji P Henson, Janet Mock, and Yara Shahidi, commented the LVMH-owned brand’s post, stating that they don’t dress Black celebrities unless they have a white stylist. @HediSlimane , Celine’s creative director and the man responsible for axing Phoebe Philo’s beloved É, has been a subject of conversation among the industry before for his apparent aversion to Black models. In case you didn’t know, we crunched some numbers for you from all his runway shows thus far: Spring 2019: 6% (6 out of 96 exits) Fall 2019 Men’s: 8% (5 out of 66 exits) Fall 2019 Womenswear: 12% (7 out of 59 exits) Spring 2020 Menswear: 6% (3 out of 51 exits) Spring 2020 Womenswear: 9% (6 out of 64 exits) Fall 2020: 9% (10 out of 111 exits) • #blm #celine #lvmh #hedislimane

French fashion house Celine shared a strong post amidst the ongoing protests as a token of solidarity against racism. However, it was called out by stylist Jason Bolden for its not-so-racially-diverse activities. Commenting on Celine’s post, Jason pointed out that they generally don’t dress up any black celebrity unless they have a white stylist. ‘@celine wait really, you guys do not dress any black celebs unless they have a white stylist. FACTS,’ read his comment. 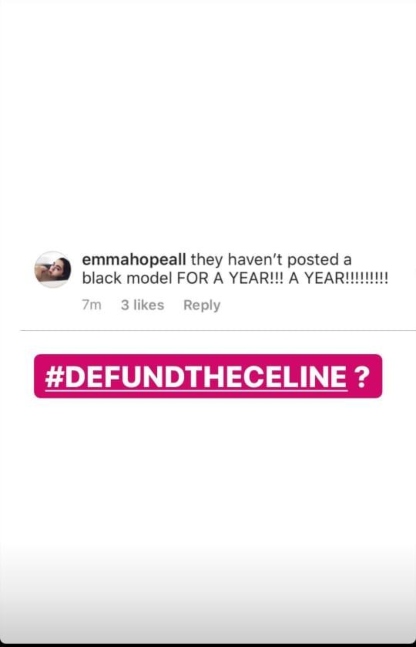 Moments later, Diet Prada rushed to the rescue and highlighted the same on its Instagram page. It not only called out the luxury brand but also shed some light on hard-hitting facts. DP pointed out the slim ratio of black models compared to those of white and the fact that Celine has not featured any black model in their IG page for over a year!

Released in February this year, @Ferragamo ’s #VivaViva campaign features a diverse range of six tastemakers—among them, Dara Allen, Paloma Elsesser, and Kiersey Clemens. But the campaign, which @tommy.dorfman both cast and photographed, seems to not have gone down as easily as the chill, progressive vibe it projects. Following a #BlackLivesMatter Instagram post by the Italian luxury brand in which a range of two light to medium skin tones are represented, the actor, whose pronouns are they/them, said “I regret ever associating myself with the brand”, going on to describe repeated instances of the Italian brand’s racism, transphobia, and fatphobia: “They have said heinous, transphobic, body phobic, and racist things directly to me. I called them out every time and they promised to change. They said they ‘learned’. They have very clearly not learned nor have they changed.” They even explain an instance when someone at the company asked if a Black model could be photoshopped white. Despite consistently raising the issues to the Ferragamo team, Dorfman describes being met with pushback, “meaningless apologies”, and even the threat of legal action if they were to speak up. “We have to, as white people, take a look at where and when we have been complacent and part of racism, homophobia, and transphobia both directly and indirectly and call it out. Call ourselves out.”, the actor added. “People have the right to know where to spend their money and where not to”. • #ferragamo #salvatoreferragamo #luxury #italian #blm #blacklivesmatter #tommydorfman

Another label that went under this watchdog’s radar was Salvatore Ferragamo. Sharing a picture of two light and two medium skin toned hands, Ferragamo posted a long caption that summed up as ‘Black Lives Matter.’ However, they were called out by netizens for not including a dark skin toned hand in their campaign which refuted its purpose.

Following this post, American non-binary actor, Tommy Dorfman lashed at the Italian fashion house for the past instances of its ‘racism, transphobia, and fatphobia.’ Dorfman, who cast and photographed this campaign, mentioned that the brand has said heinous, transphobic, racist, and body phobic things directly to their face and asked if a black model could be photoshopped white! 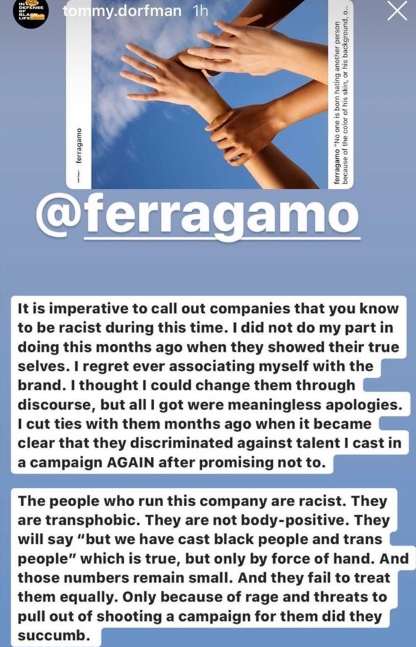 Diet Prada lent its voice to call out the Italian brand and posted this matter with a series of facts on its social media space.

Are these social messages becoming a way to connect with the target audience? What are your thoughts on this?

The Ultimate Bestfriend: Everything you need to know about Masaba Gup

Gender Labels… who? Here's how Katrina Kaif's Kay Beauty 'It's Kay To Be You' campaign unapologetically shatters myths