With Vedic chants and prayers in the room filled with family members and close friends, Rahul Vaidya and Disha Parmar tied the knot. Leaving their fans emotional on their special day, DisHul made many hearts melt. The couple had a traditional yet dreamy wedding this afternoon in Mumbai. Disha looked resplendent in a red Abu Jani & Sandeep Khosla lehenga whereas Rahul cut out a regal frame in an off-white and golden sherwani.

After tying the knot, Disha and Rahul will be hosting their reception and a sangeet ceremony on Saturday, July 17. The event is expected to be a star-studded one. Pictures and videos that went viral from Rahul and Disha's sangeet rehearsals were enough to create a strong buzz. As the anticipation soars high, PeepingMoon.com spoke to the sangeet ceremony's choreographer- Sumit Khetan. Recommended Read: The Dishul Wedding: Despite Aly Goni’s attempts, Rahul Vaidya reveals he had to pay a heavy price to get his shoes back from wife Disha Parmar’s friends

In an exclusive interview with PeepingMoon, Sumit revealed how he came on board to choreograph Rahul and Disha's sangeet. He told us, I was aware that Disha and Rahul are planning to get married. Disha has been a close friend of Ruslaan Mumtaz, who is my close friend. I had choreographed Ruslaan's sangeet as well. That's how I got to know about the plan. Disha has seen my work already so that's how we got in touch."

While we all know that Rahul is an exceptional singer, but how is he as a dancer? Allow Sumit to share. "Rahul is also exceptional as a dancer. He dances with his face and he is super-expressive. When you teach him the steps, he will emote beautifully. Even if he is doing half the job, dance-wise, he will do 200% with his face. So, this covers it all," Sumit said. 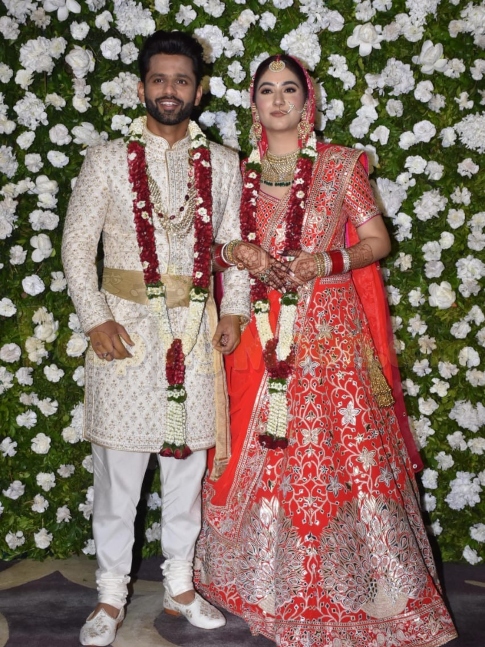 He further added that Rahul and Disha enjoy dancing. Calling the actress a 'very good dancer', Sumit said, "Disha is very graceful and didn't take much time, she picked it up quickly. She is a quick learner and can adapt to things easily. At the same time, Rahul is also a quick learner but when he starts performing, you can't take your eyes off him. When both of them come together to perform, one is left in 'awe'. You can't take your eyes off."

When asked whether Rahul and Disha submitted themselves completely to him or added their inputs too, Sumit revealed, "It is a joint venture, you know. They had their own inputs in their minds and at the same time, I had my suggestions too. "

Sumit disclosed something interesting about Rahul and Disha's performance. Keeping the excitement intact and going spoiler-free, Sumit said, "Disha is a fan of Kareena Kapoor Khan's songs. So, she wanted me to go on those lines whereas Rahul loves Shah Rukh Khan and Salman Khan's songs. Since he has been on Bigg Boss 14, he feels so connected with Bhai. So he wanted to dance like him. He also expressed his desire to go a little heroic and do something similar to Farah Khan's songs for Shah Rukh. He prefers heroic things. We have not added any complicated steps, it is simple but very heroic."

Though we tried to probe in a little more, Sumit maintained the surprise that will be unveiled only tomorrow. He even refused to reveal whether BFFs Rahul and Aly Goni are performing together. Sumit quipped, "I don't know who is performing with whom. All I can say is Rahul is performing with Disha (laughs!)."