Advertisement
HomeBOLLYWOODEXCLUSIVEPeepingMoon Exclusive: ‘There's a sense of legitimacy with these stories, makes you feel you’re not alone' - Author Manju Kapur on her book adapted into series ‘The Married Woman’

Author Manju Kapur’s novel A Married Woman has been adapted by Ekta Kapoor’s Balaji Telefilms as web series The Married Woman starring Ridhi Dogra, Monica Dogra, Suhas Ahuja and Imaad Shah in the lead. The series will start streaming on ALTBalaji from March 8, 2021.

In an exclusive interview with PeepingMoon.com, Manju Kapoor spoke about her novel, the stories that she weaves which last and the take-away that her readers walk away with after reading her literary works. 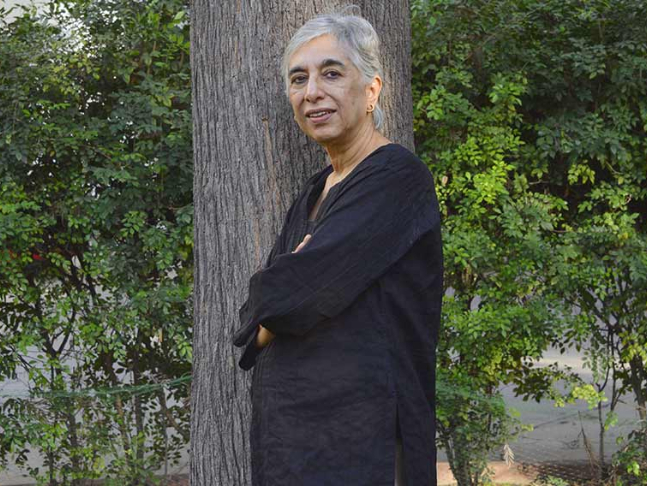 A lot of your stories focus on the status of women in India and the ways they rebel against the stereotypes. Why do you think these kinds of stories are so popular and what do you hope readers take away from reading your novels?

I believe they are popular because these are situations that are common and they are not alone in experiencing these things, like – my life is like this, my marriage is like this and my family is like this or just the thought that I am not alone in wanting to be something, I am not alone in thinking that husband, children, whatever is not enough; it is a big deal and obviously I would not like to be without them but there is a side to me that needs to be expressed and if you read about that and you have those same feelings then there is a sense of legitimacy that you feel and you gain or experience knowing that ‘I am not alone,’ because sometimes when you feel these things, people come and tell you that ‘you’re crazy to feel like this’ and it’s a common trope of ‘what women want’ and it’s the same thing that you want. They can take away all this from my novels; it depends on where you are coming from. I took away different things at different statuses in my life so no one can really answer on behalf of somebody else. What you take away depends upon- what you’re looking for, what you need, how you identify with it, all this if is written in a book then it appeals to a wider audience. Talking about your novel ‘A Married Woman’, do you think it could also be adapted to the big screen in the future? Any plans for it?

I don’t know, it really does not depend upon me, right. I don’t write thinking like that, that this could be a serial or a web series or a film. I really think on its authenticity, its emotional viability, does it speak to you also I have the craft and literary aspect in mind and I want to write as good a book as I can and I want to write a book that lasts. It should have a certain appeal and last a long time. We see books lasting over 300-400 years and we see books not lasting six months, so there is obviously a huge difference between them. I don’t think of my books being adapted. Once I write a book and it’s published, I believe it has its own journey and in a way my role in it is finished because I am on to my next book. I am author, I am a writer, my job is to write books, good books, so I can’t be distracted by all these other stuff. If someone is interested in the book then its fine, if they are not interested then also its fine, that’s not my business or my job. I am happy if that happens as it reaches more people its better but it is not in my hands and writing is a solitary business. So when you’re working day-in-day out alone in your study, working with other people may not suit me as making a film or a series is not solitary.

A Married Woman is based in the 90s. How relevant is its story for today's generation? Has anything changed in your viewpoint in the society in the last 20 years since the novel was published?

Well, it must be relevant as it’s made into a series now. Somebody said to me, ‘The more things change, the more things stay the same’. So outwardly things change all the time, sometimes they progress sometimes they don’t, but if you are in a traditional family and you are a woman you will have the same traditional sacrifices between your own life and others and I don’t think that has changed. The ways in which you balance it might change but the fact that you have to balance it has not changed. There are more divorces now as many women have a way out of their stifling marriage now which was not the case earlier. Now, the women have a choice as a lot of them are financially independent so they can take a call on what to do in a grim marriage. Your novels ‘Custody’ and ‘The Immigrant’ have been adapted into teleserials by Ekta Kapoor in the past and now ‘The Married Woman’ is also streaming on ALTBalaji. So how has the association been like with the czarina?

It’s been great, they are very professional in that sense, they buy the rights and do their own thing and I appreciate that, there has not been much interaction; I also did not expect it, my agent gave me the option how involved I want to be in this and I don’t want to be involved; as I already said I am a writer, I don’t let anything else distract me for it, so I will get distracted and won’t be able to focus on my writing and I don’t let that happen. It’s not as if I am writing 24/7 but the 2-3 hours that I write that is supported by a somewhat quiet and regular life not something related to movie life so I think writers do tend to lead a regulated life. I came to writing late, I started only when I was in 40s and my first book was published when I was in my 50s so it takes me forever to write a book. First book take 8 years and on average t takes 4 years so I don’t have attention to give to anything else. It has worked fine for me and I think I will continue to do that. I don’t wait for my novels to come out so once it is with the publisher I am on to another, writing another book.

If you were challenged to write a novel in a different genre, which genre you would choose? Do you think you would like to diversify and try your hand at maybe crime or science fiction?

Well, you know I did start a detective novel, and I wrote 40,000 words on it but then I couldn’t think of a person bad enough who would kill someone. Actually in my last novel a brother did kill his brother and I spent 400 pages explaining why that happened. I don’t think a genre piece of writing will suit me but I really think of writing essays or a diary and what I have always thought of doing but never done is write a novel in the first person. I have started it many times but by the third draft it becomes third person. It becomes very difficult as there is no barrier between the reader and the protagonist, and I want to write a shorter novel but that is also not working. A short first person novel that is what I want to write.

What’s the last book you read that you would want others to read as well and what did you like about it?

I like reading series of writings like journals. I read Breasts and Eggs by Mieko Kawakami, I love Japanese writers. I read A Suitable Boy once again when the web series came out as I saw the series. I read this The Sixth String of Vilayat Khan by Namita Devidayal. I usually like reading biographies of writers but this was about a musician and I liked it.

Are there any other female writers you take inspiration from? Or ones that you like reading or look forward to?

Well I really like Margaret Atwood. I find it a difficult thing to answer as I don’t really take inspiration from them. However, I like reading Janice Pariat, Barbara Kingsolver, Chimamanda Ngozi Adichie, Jhumpa Lahiri, Carson McCullers and Sarah Waters, yeah, I like reading their works.