Rotten Tomatoes, the renowned American review aggregator website for films and TV, has given Bollywood’s Gunjan Saxena: The Kargil Girl a 100% Fresh status. Its Tomatometer, the world’s most trusted recommendation resource for quality entertainment, bases its rating on opinions of film and TV critics and represents the percentage of positive reviews by these professionals for any release on cinema or television. It also considers viewers’ sentiments.

The Tomatometer, defined as a medium that helps aficionados decide if a film or show is worth watching, has two status ratings: ‘Fresh’ for those that are positively reviewed and ‘Rotten’ for those that get bad reviews. Any film that gets 60% and above positive reviews, receives a Red Tomato to indicate its ‘Fresh’ status by the website. And those below 60% get a Green Splat to show their ‘Rotten’ status. ‘Certified Fresh’ is a special distinction for films that are reviewed by over 80 critics including at least 5 prominent ones. 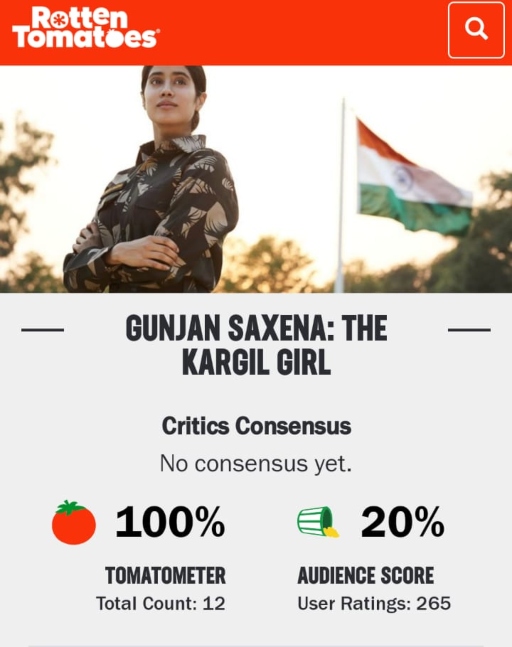 Recommended Read: Women applications to IAF will go through the roof after Gunjan Saxena, says The Guardian of London

The Tomatometer has favoured Gunjan Saxena: The Kargil Girl, Janhvi Kapoor’s war periodical based on the Kargil War veteran and IAF Flight Lieutenant Gunjan Saxena, with the rare distinction of a 100% Fresh status. While several films are Certified Fresh, hardly any get a 100% rating. In 2019, Toy Story 4 was Certified Fresh by the Tomatometer with 97% rating, The Irishman with a 96% , Avengers Endgame with 94%, Spider-Man: Far From Home with 90% and Once Upon a Time in Hollywood with 85%.

Supporting its 100% Fresh status of the Dharma Productions and Zee Studios Independence Day release, Rotten Tomatoes gives its subscribers a glimpse of all the Fresh reviews of Gunjan Saxena: The Kargil Girl by quoting the critics. It calls the biographical a story of patriotism, compassion and humanity that’s easy on the eye like its leading lady and which wages war against patriarchal mindset and discrimination and whose warfare is not about hyper-nationalism, but feminism! Among the reviews for the film Rotten Tomatoes has also is that by top critic Mike McCahill of The Guardian.com of UK.