Advertisement
HomeBOLLYWOODENTERTAINMENT NEWSFarmers’ Protest: Sunny Deol distances himself from Deep Sidhu, says ‘he and his family has no relations’ with him after Red Fort violence

Bharatiya Janata Party (BJP) MP from Gurdaspur actor Sunny Deol has issued a statement on Twitter distancing himself from actor Deep Sidhu after the latter’s video with protestors hoisting the Nishan Sahib flag at the Red Fort during the farmers’ rally on January 26 went viral. Deol stated that he was saddened by what happened at the Red Fort and said that he or his family has no relations with Deep Sidhu.

A throwback picture of Sidhu with Deol, PM Narendra Modi and Amit Shah went viral soon thereafter, with opposition leaders alleging Sidhu’s affiliation to BJP. The images were also tweeted by lawyer and activist Prashant Bhushan. However, the images are from April 2019, when BJP had announced Deol’s candidacy for Lok Sabha from Gurdaspur. Sidhu had aided the actor’s campaign but it seems the party and the former have parted ways. 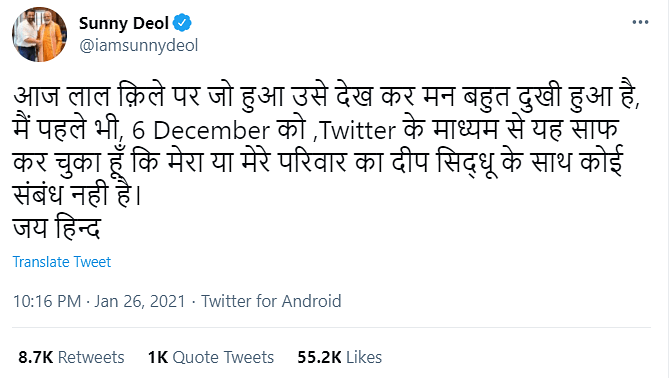 RECOMMENDED READ: Abhay Deol presents an untold story of bravery and courage in Disney+ Hotstar's '1962: The War In The Hills' teaser

Apart from Deol’s recent tweet, he had also clarified on December 6, 2020 that he was not affiliated to Sidhu or any of his actions during the farmers’ protest. In a statement he says, “Deep Sidhu, who was with me at the time of election, has not been with me for a long time, whatever he is saying and doing, he is doing according to his will, I have nothing to do with any of his activities.” He further says that he is with the party and the farmers.

This is Deep Sidhu with Modi & Shah. He led the mob at Red Fort today & unfurled the Sikh religious flag there pic.twitter.com/dX9bQjAIim

BJP leader Tarun Rathi and PM Modi had also shared the image of Sidhu from 2019 when Deol was contesting elections and the same old picture is being circulated now on social media. Sidhu, Deol, Shah and Modi can all be seen in the same attire. 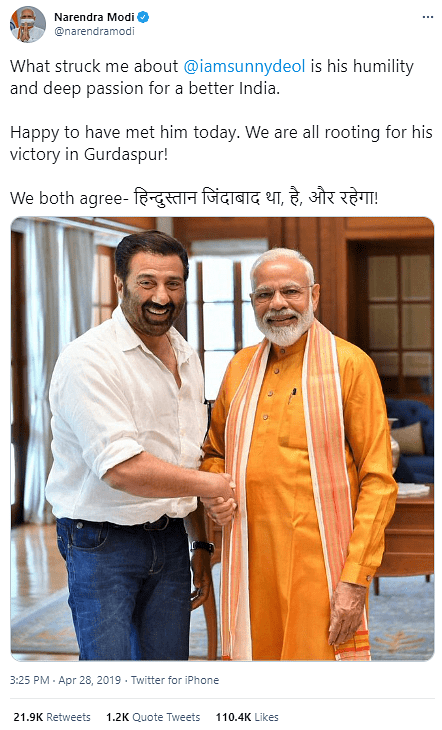 On January 26, Republic Day, Sidhu had shared a Facebook live where he can be seen among the farmers hoisting the Nishan Sahib flag atop the ramparts of Red Fort. In another live video, he issued a clarification stating that the Indian National Flag was not removed from the flagpole and they only hoisted the Kisan Mazdoor Ekta’s flag and the Nishan Sahib. The move received a lot of backlash from several farmer leaders for turning the protests communal.

Sidhu has emerged as an important voice of the farmers’ protest against the three farm laws. He lent his support to the protests at the sit-in at Shambhu Barrier in Punjab's Patiala district when the protests started in September and has remained with the protesters ever since.