Advertisement
HomeBOLLYWOODENTERTAINMENT NEWSTrishala Dutt opens up about father Sanjay Dutt's drug addiction, says 'It's a disease he has to fight every single day'

Trishala Dutt opens up about father Sanjay Dutt's drug addiction, says 'It's a disease he has to fight every single day'

Sanjay Dutt's drug addiction phase is known to all. The 61-year-old actor has admitted falling prey to narcotics and even sought help to come out of the addiction. He was in a rehab centre in the US which was also shown in Ranbir Kapoor's Sanju based on Sanjay's life. Now, his drug addiction became a talking point when his daughter Trishala Dutt flagged off an AMA session on Instagram. Trishala, a US psychotherapist, replied by talking about how a person's mind gets affected due to drug addiction.

"First it’s important to note that addiction is a chronic disease characterised by drug seeking and use that compulsive, or difficult to control, despite harmful consequences. The initial decision to take drugs is voluntary for most people, but repeated drug use can lead to brain changes that challenge an addicted person’s self-control and interfere with their ability to resist intense urges to take drugs," Trishala wrote. 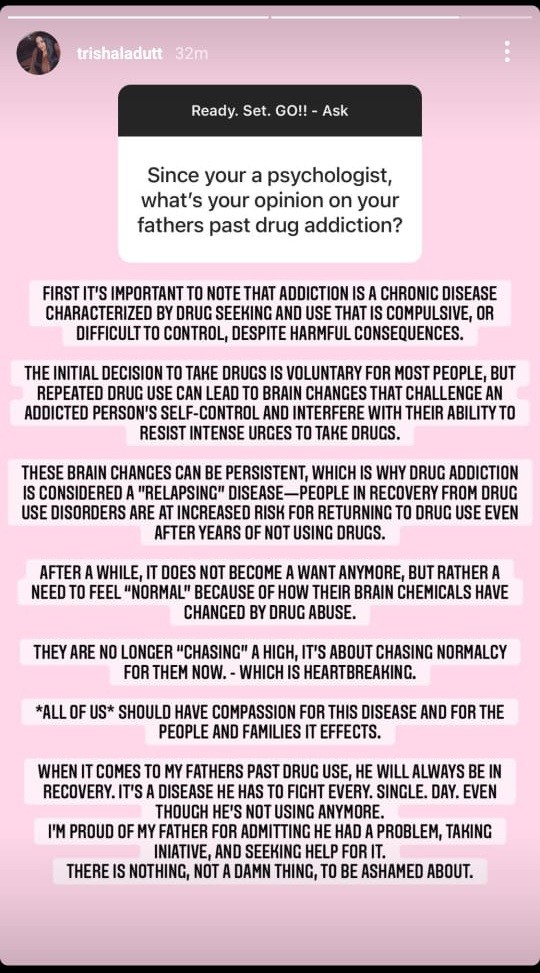 Trishala, replying to a person who asked how she perceives her father’s past addiction, said he has to fight it every day even though he doesn't consume drugs anymore. She told she is proud of Sanjay for admitting that he had a problem and took corrective measures. "When it comes to my fathers past drug use, he will always be in recovery. It's a disease he has to fight every.single.day. Even though he's not using anymore. I'm proud of my father for admitting he had a problem, taking initiative and seeking help for it. There is nothing, not a damn thing, to be ashamed about," she said.