The Indian Motion Pictures Producers’ Association (IMPPA) has written a letter to Maharashtra Chief Minister Uddhav Thackeray requesting a few alterations to the Standard Operating Procedures (SOPs) issued to production houses for the resumption of the shooting schedules after the Coronavirus lockdown in uplifted. The letter is on the same lines as the plea made by the Indian Film and Television Director's Association (IFTDA) requesting the CM for some changes in two main guidelines.

The IMPPA drew attention to some of the ‘totally impractical guidelines which cannot be implemented’ and asked for some leeway and leniency on four salient rules that the SOPs suggested. The letter reads, “The guideline for the presence of a doctor, ambulance and nurse, throughout the shooting is something totally impossible as you are well aware because doctors, ambulances, and nurses are not even available in hospitals which are currently working and your government had to employ 100s of doctors from Kerala to fulfill the shortage..." Instead they asked the government to allow production houses to keep doctors and ambulances ‘on-call’ if the need arises. 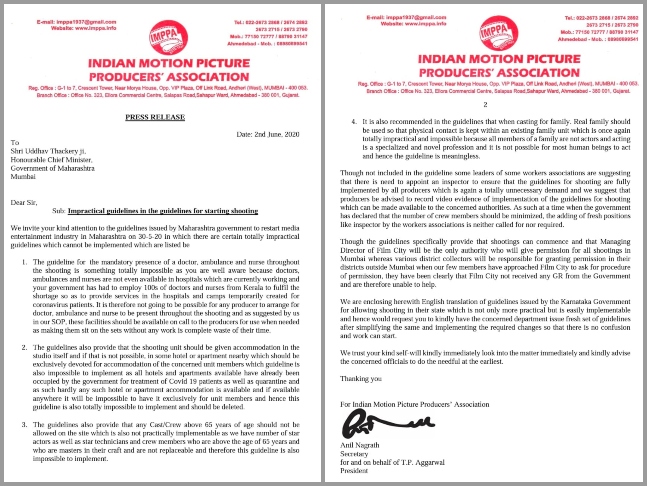 Another clause that IMPPA had an issue with was the age limit imposed over the cast and crew. The government guidelines had asked production houses to avoid employing staff over the age of 60 years as they are most vulnerable to infection. However, the IMPPA in its letter stated that several major stars and technical crew were over the age of 60 making it not feasible.

The letter also stated that the guidelines issued by the Karnataka state government were more practical and feasible. It pleaded to “to kindly have the concerned department issue fresh set of guidelines after simplifying the same and implementing the required changes so that there is no confusion and work can start,” as there was confusion over the orders since Film City has responded saying that it has not received any clear directive from the government on the resumption of film shoots.