Renowned Bollywood singer Kanika Kapoor found herself into grave trouble after she tested positive for the novel COVID-19 aka Coronavirus. The Baby Doll singer who returned from London to Mumbai on March 9 and then travelled to her hometown Lucknow on March 11, is now under self-isolation at the Sanjay Gandhi PGIMS. Kanika came under the scanner when she informed her fans about being tested positive through an Instagram post. Soon after, she faced severe backlash and trolls for putting others in danger by attending a lavish party with over 200 people including the National Vice President of Bhartiya Janta Party, Vasundhara Raje and her BJP MP son Dushyant Singh present.

Kanika, observing the amount of criticism she received, surprisingly deleted her controversial Instagram post from her profile. Well, it seems the singer will flag off another controversy soon for deleting the post. 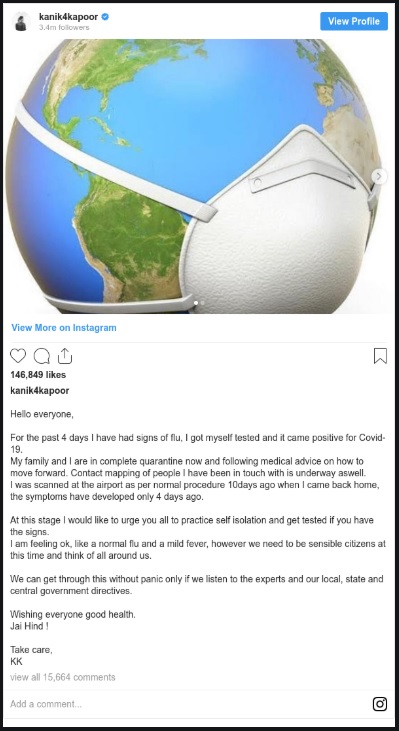 Recommended Read: 'UP to UK, kisiko nahi chhoda,' say trolls after a throwback picture of Kanika Kapoor and Prince Charles goes viral after both test positive for Coronavirus

Talking about Kanika's case, after travelling from London to Mumbai and then Lucknow, Kanika attended her maternal uncle's house-warming party apart from the lavish party. The house-warming function hosted nearly 56 people and 11 of them are tested negative. On the other hand, Kanika's friend Ojas Desai was suspected of Coronavirus, but he has been tested negative too and is practicing self-isolation at his Mumbai residence. In the latest development, Kanika has been tested positive for COVID-19 for the third time. According to the director of Sanjay Gandhi PGIMS, Dr. RK Dhiman, the 41-year-old will be declared free from the virus only after two of her reports turn out to be negative.