Aamir Khan took to social media on Wednesday to share photos of him and his wife Kiran Rao taking a quick snack break, where the two can be seen eating ‘bhel puri’ off a newspaper and drinking sugarcane juice with his wife at a local ‘dhaba’ in Zhawadarjun, a village in Maharashtra. The two were on their way to celebrate Maharashtra Divas in Satara district and were also accompanied by Paani Foundation officials.

The star even posed with the shop owner and his family in another picture.

Aamir and Kiran have lately been featuring on Toofan Aalaya, a weekly Marathi TV show that discusses the water situation in Maharashtra and also features a mix of Marathi film stars and other people telling inspiring stories. Madhuri Dixit was the latest celebrity to have appeared on the show.

On the occasion of Labour Day today, the couple did shramdaan in Koregav taluka as part of the Me Jal Mitra campaign. The actor has been known to lead the community towards working for the water harvesting movement for a drought-free Maharashtra. He will also be visiting multiple districts which also include Sawarde Village. 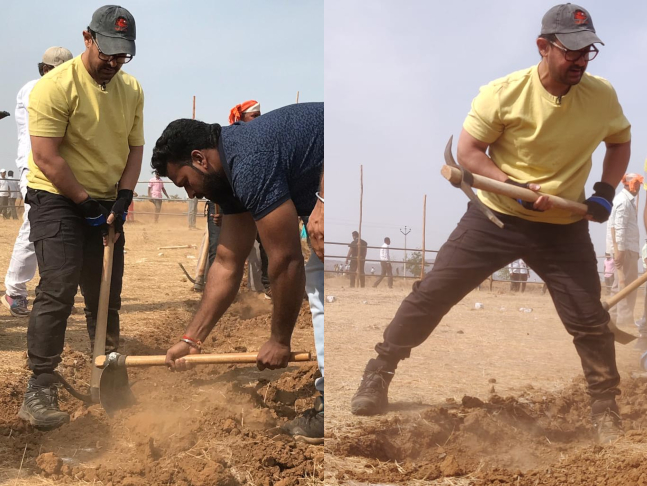 The shramdaan takes place every year through the Paani Foundation.