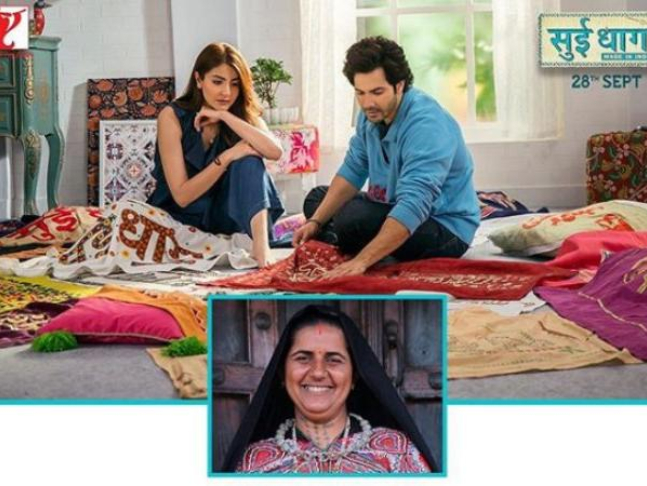 Varun Dhawan and Anushka Sharma’s forthcoming film Sui Dhaaga – Made in India is all set to give flight to its entrepreneurial journey on September 28. The film’s heartwarming and adorable trailer is already winning hearts and motivating and inspiring people to embark on their dreams. The film directed by Sharat Katariya is based on the Government of India’s Made In India initiative and celebrates entrepreneurship and the empowerment that self-reliance brings.

Ahead of the film's release Varun and Anushka shared a video about Pabiben Rabari, a woman entrepreneur from Kutch, Gujarat who battled all odds to set up her own firm that has employed hundreds of women to become independent and empower themselves to shape their own future, and those of their families and future generations. The video shared on the official YouTube channel of Yash Raj Films shows the breathtakingly exquisite and beautiful embroidery that Pabiben and her Rabari community women make for a living.

Varun and Anushka both shared some very applauding and motivating words about Pabiben as they shared her story. On the other hand, Anushka wrote, "A story of determination, spirit and art. Watch the undeterred entrepreneurial journey of Pabiben ... It will definitely win your heart."

Pabiben comes from a community called Rabari which is a nomadic tribe of Gujarat. They are distinguishable by the numerous tattoos that they have on their hands and throat and the big long brass earrings that women wear, as well as the black cape that they wear on their heads, while the men are always dressed in white. Supported by her husband Pabiben started selling her embroidery as a means of business and has been able to uplift her family’s and her community’s standard of living.

Sui Dhaaga – Made in India is a heartwarming story of pride and self reliance which finds its roots in the heart of India and runs in every Indian’s veins. The film brings back our traditional art forms and handicrafts back in focus. The film is helmed by National award winning Producer - Director Duo of Maneesh Sharma and Sharat Katariya.