It was a roller-coaster ride on Friday’s episode of Bigg Boss 14 as the inmates were pleasantly surprised by the new entrants of the house. The housemates woke up to the song Tohfa Tohfa Laya Laya, which turned out to be the perfect background music as Aly Goni, Rakhi Sawant and Nikki Tamboli made their return to the Bigg Boss 14 house. However, there were a few fights and Arshi Khan and Rakhi clashed against each other.

The episode began with Arshi cribbing about Vikas Gupta and Rubina Dilaik wondered why she was after him. Later, Kashmera Shah and Arshi were seen criticizing Manu Punjabi, Rahul Mahajan and Eijaz Khan. Jasmin was overjoyed by seeing Aly back in the house and could not control her tears. Eijaz was happiest to see Nikki enter the house. 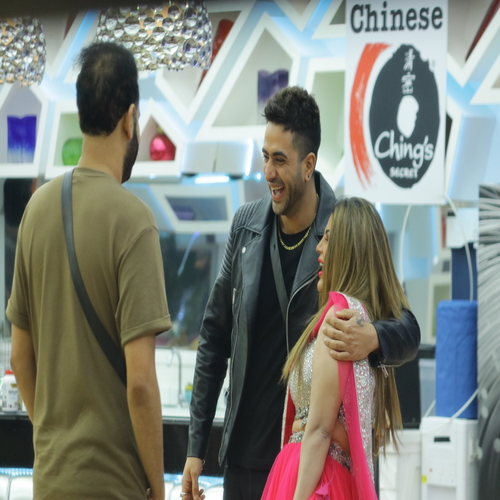 -Rahul Mahajan and Arshi had a fight over food. When Rahul complained about Arshi insulting him when he asked for food, she got furious and asked him to make his own food. She accused him of lying as she cooked for him. Arshi then is seen flirting with Abhinav and asking him whether he believes in an extra-marital affair to which he said no.

-Rakhi enters the Bigg Boss 14 house with a big box and said that it’s a gift for everyone. Nikki emerges out of the box much to the elation of the inmates. When Jasmin asks Rakhi if she brought any gift for her, the latter tells her to go into the confession room. In the confession room, Jasmin sees Aly and runs to hug him. The two friends have an emotional reunion. He advises her to sort things out with Rubina as she is not wrong.

-Aly tells Rubina and Abhinav that Kashmera is working as a spy and says that Eijaz is a ‘bad flipper’. He tells the couple that Eijaz always talks against them and Jasmin.

-Rakhi takes a dig at Arshi for a fake nose and compared her to Shilpa Shinde. She tells Vikas not to worry about Arshi as she won’t let her do anything to him. Arshi and Rakhi had a heated argument.

-Aly tells Jasmin that Manu Punjabi is not her friend and has been tweeting against her non-stop. He  also took a dig at Eijaz but was later seen talking to Manu about him and how he has been speaking ill about Jasmin.

-Rakhi tells Vikas that she feels bad for him as no one is supporting him when Arshi was torturing him. Aly tells Arshi that he doen’t like Vikas and encourages her to target him. Aly asked her why she was happy seeing Vikas, had she forgotten what he all did to her. Arshi and Vikas once again start arguing.

-When Aly asks Rakhi about her husband, she refrains from answering and makes excuses. Arshi said that she won’t answer his question. Kashmera writes ‘jalebi’ on Vikas’ pillow while Arshi steals his eggs.

-Vikas reveals to Abhinav that Kavita Kaushik and her husband Ronnit Biswas are claiming that he has severe alcohol issues and he used to drunk text Kavita. However, Abhinav refutes all the claims and tells Vikas to only tell Rubina about this and no to others. Rubina tells Abhinav that after exiting the house they will take action against Ronnit but Abhinav tells her to not jump the gun.

-Aly accuses Vikas of revealing outside information for his own benefit as he also knew about Ronnit’s tweet against Abhinav but did not tell them. Aly and Kashmera criticize Vikas. When Abhinav asks Nikki about the issue, she tells him not to let it bother him.

-Jasmin, Manu, Rahu and Abhinav tell Arshi to stay away from Vikas and not to trouble him. They also asked him to not make breakfast with her. Later, Manu told Jasmin that let Bigg Boss handle the situation as he is not clear if they are fighting for real or faking it.