Bigg Boss 13 inmates Sidharth Shukla and Shehnaaz Kaur Gill won the hearts of the audience with their bitter-sweet relationship inside the house. Now, as Sidharth has entered the Bigg Boss 14 house as toofani senior for the first 14 days of the show, fans are hopeful that Shehnaaz will join him soon. However, it appears as if the Punjabi actress isn't happy with the Balika Vadhu actor's ongoing stint inside the house. Shehnaaz, who shares a special bond with Sidharth, apparently unfollowed him on Twitter.

Well, yes. When we checked her Twitter account, the only actor Shehnaaz is following is Kartik Aaryan. The rest of them are her fan clubs. This news came after Sidharth tried to flirt with Bigg Boss 14 's contestant Nikki Tamboli. In the episode aired on Tuesday night, Sidharth was heard saying that he wants to marry Nikki while the South actress replied by calling him 'marriage material'. 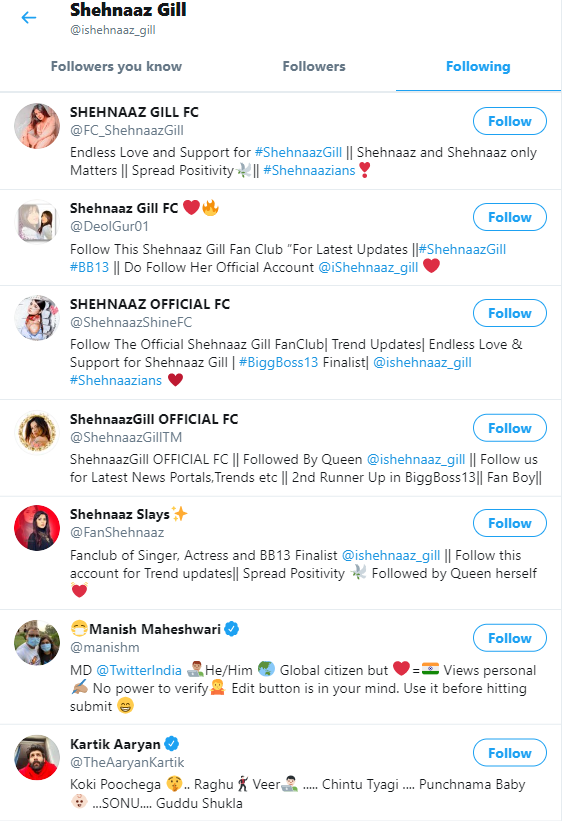 Recommended Read: Too much fun ho jata: Aly Goni wants Shehnaaz Gill to be with Sidharth Shukla in 'Bigg Boss 14' instead of Gauahar Khan

Reportedly, Shehnaaz will be entering Bigg Boss 14 house soon. It is being said that she will be a guest on the show. However, it is still unclear whether she will be coming when Sidharth, Gauahar Khan and Hina Khan are inside the house as 'toofani seniors' or after 14 days.