Advertisement
HomeWEBCASTWebcast Reviews'The Casino: My Game My Rules' Review - Cash in your chips and exit soon as this Karanvir Bohra's and Mandana Karimi's series is a snooze fest from the word go!

'The Casino: My Game My Rules' Review - Cash in your chips and exit soon as this Karanvir Bohra's and Mandana Karimi's series is a snooze fest from the word go!

Show: The Casino: My Game My Rules

Who said the content on OTT is always avant-garde? Often the web space has been accused as a dumping ground by many filmmakers when their content fails to make the cut for a watchable film or TV show. Trust us, the same has happened with Zee5 latest web series The Casino: My Game My Rules. The show, least to say, is stale, cliche, and a snooze fest right from episode one.

The Casino writer Deepak Pachori and director Hardik Gajjar tell a tale of a stinking rich tycoon Mr. Marwah who owns Nepal's biggest casino and his heir Vicky, who is rich, borderline psychopath, and is shit scared of his father! Then there is Rehana (Mandana Karimi) who calls herself as Mr. Marwah's 'keep' but openly flirts with the son as well as the father. Her intentions are clear: To overthrow Mr. Marwah and be the boss babe. But there has to be a suspense element, after all, it's a thriller series! So not-so-painstakingly Rehana makes a plan - lures Vicky to fall in love with her and boom! Surprise: There are 10 episodes, like merry-go-around, with questions tossed in the air like ping-pong balls: Will Rehana kill Vicky? Will Vicky find out about Rehana’s motive? Or are there even bigger plans? This one mess is even messier than Salman Khan's star-studded ensemble (no jokes) Race 3. There are no brakes to the absurdity just like the opening scene of the show - Vicky is shown running away in his car from the crime scene, loud music in the backdrop, till the cops catch up to his car to avoid him hitting a woman in the middle of a road. Makes sense? No? Then that's it. 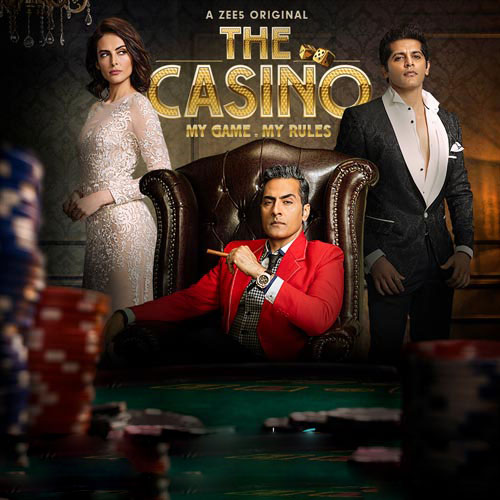 But all is not that bad. You get to listen to Sunidhi Chauhan's crooned numbers, a welcome reprieve. Sudhanshu's look is modeled on Vijay Mallaya, expect this one is strictly on a diet of sex and salads (see the six-packs). Mandana and her thigh-high slit numbers, ruby lips, and villainous act (the only one who has acted) salvage the series to an extent. And TV's beloved villain Karanvir is trapped in a role which is so shoddily written that he looks dumber than Abbas Mustan's suspense-thriller films' heroes.

Oh, there was Vicky's mother too, the only 'nice' character but makers decided to kill her in flat five minutes into the show. Reasons not to be divulged.

The actors are more inclined towards mimicking than acting. The show is about the casino and there's hardly anything audience will get to see of it. Worst are the dialogues, cheaper than a B grade film. Look for yourself: Bade log hotehi galati karne ke liya hai! (No kidding). The age-old story of a power struggle in a rich family topped with murders, mystery, and sex - the concoction is nothing but poisonous, tastes bad, and with a potential season two on cards, the lesser said the better. The picturesque locations and Mandana's decent acting efforts are the only saving grace in this casino as the rest of the cast is busy playing their parts with 'poker' faces. Cash in your chips and exit soon as there is no 'joker' in the pack to turn the tables and save you from this debacle.