Advertisement
HomeWEBCASTWebcast Reviews'Rangbaaz Phirse' review: Jimmy Shergill, Sharad Kelkar, and Sushant Singh show a riveting tale of what goes behind in the making of a criminal

'Rangbaaz Phirse' review: Jimmy Shergill, Sharad Kelkar, and Sushant Singh show a riveting tale of what goes behind in the making of a criminal

Rangbaaz is back on Zee 5 exactly after a successful year with its sequel titled Rangbaaz Phirse. None of the previous cast members have been repeated in the latest show, which marks the digital debut of Jimmy Shergill and Sushant Singh. Directed by Sachin Pathak, the action crime drama has 9 episodes, each of them being 40 minutes long. The intriguing, gripping storyline is based on the real-life story of Amarpal, which is played by Jimmy Shergill. Rangbaaz Phirse sheds light on the criminal backdrop of a common hardworking man Amarpal, who was a bright student but circumstances led him to go haywire. In fact, this season featured intresting trends on social media with #NotBornACriminal going viral. The narrative clearly states that Amrapal was not born a ruthless criminal.

The show starts with gunshots in a public bus and the fear of Amrapal is quite evident in the first few episodes. Soon the screenplay turns to flashback scenes and shows that Amrapal wanted to become an IPS officer and wanted to serve the nation and country, like every bright student. Staying in Rajasthan, he was well versed with the state's political and cultural situation. To help fellow students, he takes a chance at college politics and makes a mark. However, in no time, he falls prey to casteism as there is a separate wing for Jats and Rajputs, Amarpal being a Rajput is coaxed by his friends to divide in rule, and from there on begins his political career. Eventually, he becomes a ruthless gangster and his dialogue 'Sab Ki Samadhi Yahi Banegi' with a straight face, and a gun in his hand is definitely hard-hitting.

Cut to Amrapal’s personal life, he gets into wedlock with Rukmani (Spruha Joshi), who is seen supporting her husband in thick and thin. Thereafter comes Jairam Godara (Sushant Singh), a Jat by caste who comes to his rescue when Amarpal was in deep mess and trouble. Since then, Amrapal is indebted to Jairam for life and the duo share a deep bond. As his life moves ahead, Amarpal is once again asked to stand for the Panchayat elections. His close friend Madan Singh (Ahmad Khan) further pursuades him to stand for the election.

Unaware of opponent Raja Pohghat’s harsh attempts (Sharad Kelkar), Amarpal loses the elections by merely 2 votes. Thereafter begins the journey of antagonist Raja’s and Amrapal’s quest to win and defeat each other by any means. In the war of power and politics, Jairam and Amrapal join hands against Raja Phogat and plan to defeat the latter. In the coming episodes, we see war intensifying in the state. What happens next and who dies, who survives is what we leave up to the audience to figure out in the coming episodes. 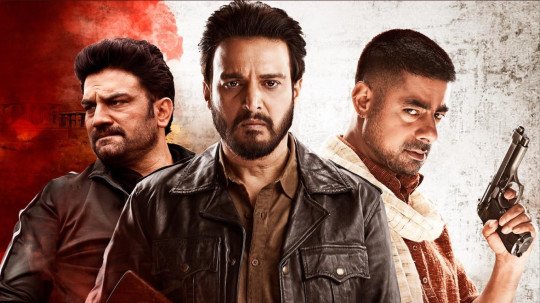 Nonetheless, performance of each actor is noteworthy. Jimmy Shergill as Amrapal is fierce, and the journey that makes him a Rangbaaz is narrated in proportion and does not glorify the criminal in any sense. Jimmy has been part of various gangster-based movies, therefore its easier for the audience to see him in this role, but what catches our attention is his tone and dialect, which he totally aces. Sushant as Jairam marks his digital debut with Jimmy and his expressions are priceless in emotional scenes.

Gul Panag’s entry happens right at the end of the third episode. She is introduced as Ananya Chaudhary, a broker who has lost 13 crores in the share market. She comes to Amrapal for help to save herself from the debtors. Gul could have been given more screen space, however, her well layered role isn’t missed. Sharad as an antagonist is cruel, full of dark shades and you will love to hate him. Spurha Josji as Amarpal’s wife is sweet, innocent and fits the role perfectly. Zeeshan Ayyub as a corrupt cop also has a lot to do in the show, however with an ensemble cast, the focus is on Jimmy and Sharad more.

The location looks real although the show is shot in Bhopal and not in Rajasthan. The backdrop of the state and culture has been researched well and the dialect is picked up by actors perfectly. The screenplay is smooth and doesn’t stretch a bit. Siddharth Mishra’s creative has done magic in this season too. Rangbaaz Phirse doesn’t show crime or criminals in a bad light but instead depicts their real mindsets. With wonderful content based on a true story, the web show is a binge-watch this weekend.