Discovery, India’s leading real-life entertainment network which has notably premiered the most iconic and record-breaker special with Prime Minister Narendra Modi in a memorable episode of Man vs Wild with Bear Grylls and last year, featured personalities like Superstar Rajnikanth and Akshay Kumar, is back with yet another gripping season featuring the Super Cop of Bollywood, Ajay Devgn. Shot in the Indian Ocean, Discovery today revealed the first look of its most anticipated show. Witness how Bollywood's favorite actor and the wild icon Bear Grylls turn a destination into a complete adventure-packed wilderness.

In this discovery+ exclusive, the world-famous adventurer Bear Grylls and Ajay Devgn embark on a survival experience that begins in a sea dominated by sharks and unfavourable weather, eventually moving to uninhabited islands. The seasoned adventure specialist who has hosted multiple distinguished personalities from across the globe, is seen engaging in a candid conversation with Ajay on his family, career, and life in the new season. Moving out from his comfort zone, Ajay Devgn is seen going beyond mere endurance skills for this real-life adventure that celebrates his instinct, endeavor, and inclination to survive in the most desolate islands of the Indian Ocean.

“This is my first ever expedition into the wild and I can tell you it wasn’t child’s play! My father was an action director and in my career span of 30 years in the Indian industry, I have had the fortune to play several roles including some dangerous action ones too. And, this was one of those times when I had to put those learnings to the test again. I’m so glad this opportunity came my way, it helped me explore and go beyond my comfort zone. A special salute to Bear who has been inspiring millions to explore and develop a much-needed relationship with nature, and of course to keep me safe in the wild. From hungry jungles to the depths of the ocean, Bear knows it all!” shares Ajay Devgn on his shooting experience. 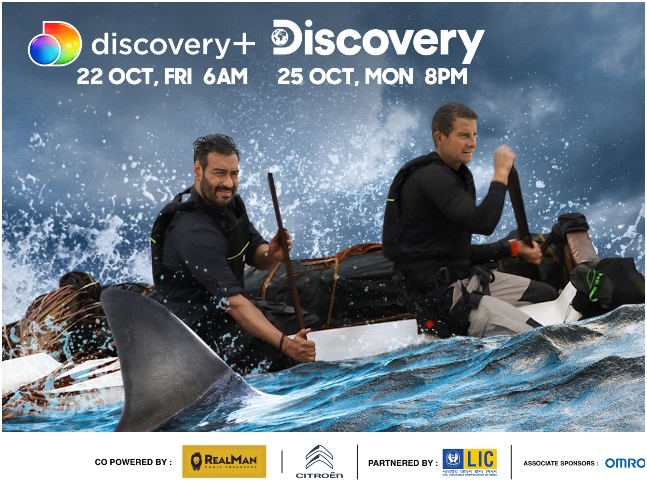 “To get to take the legendary Ajay into the wild and have an adventure with him was a privilege. Desert islands are always tough to survive on and Ajay showed total commitment to do what we needed to get out in one piece. He was also incredibly honest, sharing so many insights into his life and career and I value that honesty so much. One thing that I've learnt about Ajay is he is a quietly spoken man, but he is a man with great love and strength in his heart. Said Bear Grylls on working with Ajay Devgn.

“Into the Wild with Bear Grylls is one of our most acclaimed and loved series and with the new episode, the motive was clear - to make it bigger, better and widen our audience base by bringing forth a deadly combination of thrill, entertainment, and adventure through two iconic daredevils, Ajay Devgn and Bear Grylls. The show has been appreciated worldwide and we expect to land big with this special season.”, said Megha Tata, Managing Director- South Asia, Discovery Inc.

Into The Wild with Bear Grylls is an innovative new format inspired by Man vs Wild, which is one of the most-watched wilderness survival television series in the world. The first episode of the series featured Superstar Rajinikanth early last year who made his television debut with Bear Grylls. Followed by the Khiladi himself Akshay Kumar on-board in the last episode of this cult franchise which has become a household name.. ‘Man vs Wild with Bear Grylls & PM Modi’  disrupted the Indian media landscape, establishing itself as the TV event of the year. Beyond Prime Minister Narendra Modi, Bear Grylls has also hosted prominent celebrities in the past such as then sitting American President Barack Obama, Kate Winslet, Roger Federer, Julia Roberts and many more. Into The Wild with Bear Grylls is produced for Discovery Communications India by The Natural Studios and Banijay Asia.

Akshay Kumar, Sara Ali Khan and Dhanush make for an exciting trio in the first poster of 'Atrangi Re'; trailer to be out today

‘My first film Patthar Ke Phool was with Sippy Films, and so is my digital debut,’ says Raveena Tandon at the trailer launch event of Aranyak

Inside Edge Season 3 Trailer: Vivek Oberoi, Richa Chadha & Aamir Bashir pump up the drama as rivalries thicken both on and off field