The international reviews for Marvels' Eternals have been released and the film has received mixed reactions from the reviewers. While there has been negative feedback, some did enjoy the film. The film premiered in Los Angeles last week and is slated to release during Diwali in India. Eternals is helmed by Oscar-winning director Chloé Zhao. The film has a stellar ensemble cast that includes Gemma Chan, Richard Madden, Kumail Nanjiani, Lia McHugh, Brian Tyree Henry, Lauren Ridloff, Barry Keoghan, Don Lee, Harish Patel, Kit Harington, Salma Hayek, and Angelina Jolie.

Check out some of the reviews below:

In his review for Forbes, Scott Mendelson wrote, “More than any previous MCU movie, Eternals feels like ‘just a superhero movie’ and a ‘We’re running out of characters’ movie. Both credit-cookie scenes will require an explainer, and the first one reeks of a kind of desperation I’ve never seen from Hollywood’s biggest franchise. Considering the years of ‘DC Films versus Marvel’ online handwringing, to the point where Hollywood burned itself down chasing Marvel’s triumphs, it’s quite ironic that one of Marvel’s biggest misses is in an attempt to mimic their biggest rival.” Variety's Owen Gleiberman wrote, "The film feels very standard. It’s in the genre of team superhero movies, and at this point, between the Avengers and the X-Men, the Guardians of the Galaxy and the Justice League, the Suicide Squad and the Fantastic Four, there have been more than 20 of those. They have their tropes — the camaraderie and the backbiting, the falling apart and the coming together. Zhao works within those tropes, lending them sturdy drama and dimension and springing some major twists on the audience."

The Guardian's Steve Rose wrote, “There’s just too much going on: it’s all headed towards yet another “race against time to stop the really bad thing happening” climax. It’s not exactly boring – there’s always something new to behold – but nor it is particularly exciting, and it lacks the breezy wit of Marvel’s best movies.”

Joshua Rivera from Polygon, in his review, called Eternals a ‘mess’ and added that the film ‘isn’t bold, merely incongruous.’ BBC reviewer Nicholas Barber also seemed unimpressed by the film and wrote, “Eternals may not be the worst of Marvel's movies, but it's undoubtedly the most disappointing.” 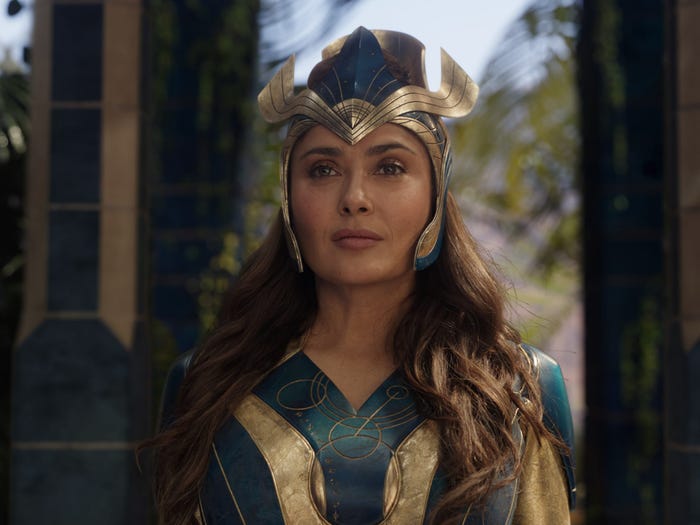 IGN wrote, "Eternals is beautifully shot and terrifically acted, but it bites off more than it can chew in its third act."

Eternals is set to release on November 5 in India. Releasing a day after Diwali, the Marvel film is set to clash with Akshay Kumar's and Katrina Kaif's Sooryavanshi.