Advertisement
HomeHOLLYWOODNewsLana Del Rey posts an open letter for critics accusing her of 'glamorising abuse', call out their double standards for not pointing fingers at Ariana, Cardi B and Beyonce

Singer Lana Del Rey has posted an open letter to shut down the accusation that she is "glamorising abuse".

"Now that Doja Cat, Ariana, Camila, Cardi B, Kehlani and Nicki Minaj and Beyonce have had number ones with songs about being sexy, wearing no clothes, f--king, cheating etc -- can I please go back to singing about being embodied, feeling beautiful by being in love even if the relationship is not perfect, or dancing for money -- or whatever I want without being crucified or saying I'm glamorizing abuse????" she posted on Instagram on Thursday.

The Grammy nominee then stated she is "fed up with female writers and alt singers" who claim she glamorises abuse "when in reality" she is "just a glamorous person singing about the realities of what we are all now seeing are very prevalent emotionally abusive relationships all over the world".

"With all of the topics women are finally allowed to explore I just want to say over the last 10 years I think it's pathetic that my minor lyrical exploration detailing my sometimes submissive or passive roles in my relationships has often made people say I've set women back hundreds of years. Let this be clear, I'm not not a feminist-but there has to be a place in feminism for women who look and act like me-the kind of woman who says no but men hear yes-the kind of woman who are slated mercilessly for being their authentic, delicate selves, the kind of women who get their own stories and voices taken away from them by stronger women or by men who hate women, the singer continued.

The singer also wrote she is "been honest and optimistic about the challenging relationships" she has had. "And that was sadly my experience up until the point that those records were made. So I just want to say it's been a long 10 years of bulls--t reviews up until recently and I've learned a lot from them. But I also feel it really paved the way for other women to stop 'putting on a happy face' and to just be able to say whatever the hell they wanted to in their music-unlike my experience where if I even expressed a note of sadness in my first two records I was deemed literally hysterical as though it was literally the 1920s," Lana added. 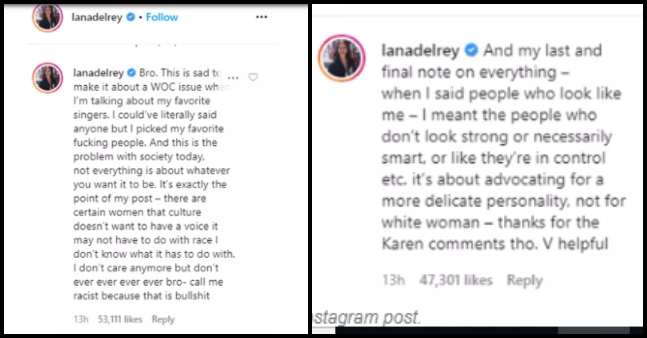 But some fans said the examples she chose - including Nicki Minaj and Beyoncé - were mainly black women and she was criticised by many on social media for especially targeting her fellow artistes of colour. Responding on Instagram, Del Rey said: "Don't ever ever ever call me racist." Lana defended herself, saying the singers she mentioned in her statement were her "favourite singers". "It doesn't change the fact that I haven't had the same opportunity to express what I wanted to express without being completely decimated and if you want to say that that has something to do with race that's your opinion but that's not what I was saying," she wrote.