Advertisement
HomeHOLLYWOODNewsWatch: Nick Jonas and Joe Jonas are definitely ‘Keeping Up With the Kardashians’ as they recreate the iconic purse fight between Kim-Khloe Kardashian

Watch: Nick Jonas and Joe Jonas are definitely ‘Keeping Up With the Kardashians’ as they recreate the iconic purse fight between Kim-Khloe Kardashian

Jonas Brothers comprising of Kevin Jonas, Joe Jonas and Nick Jonas are one of the most popular rock-pop bands but they also have another talent, they are extremely funny and have great acting skills. The brothers also starred in their very own Disney film Camp Rock and television series Jonas Brothers: Living the Dream. However, now only Nick is the one who acts in a regular basis on films, but their latest antic has shown that Joe and Kevin have not forgotten their acting skills. In a new video that they shared online, Nick and Joe team up to recreate an iconic scene from Keeping Up With The Kardashians- the legendary purse fight between Kim Kardashian West and Khloe Kardashian.

The video is so hilarious that you can’t help but laugh out loud. Nick plays the role of Khloe while Joe essays the wrath of Kim who proceeds to beat him up with his purse. Joe shared the video on his Instagram and captioned it, “Don’t be Rude!” The scene opens with Joe bursting through the door, lip-syncing to Kim saying, “Don’t be f*cking rude!” and then tries to hit Nick with his purse. Kevin Jonas makes a surprise appearance at the end of the short video when he walks in front of the camera looking shocked, possibly a reference to Rob Kardashian's role in the original fight where he was just a bystander not giving a hoot about his sisters hitting each other.

RECOMMENDED READ: Nick, Kevin and Joe's Jonas Brothers announce their new single ‘What A Man Gotta Do’ and fans cannot contain their excitement

The video was liked by the Kardashian sisters as well. Kim commented, “OMGGGGGGGG,” while Khloe wrote, “Hahaha nailed it!!!!!!” Nick’s wife Priyanka Chopra Jonas also commented and wrote, “Gold,” while Hailey Bieber laughed out loud at their mimicry. She wrote, “Lmfaoooooo," while Diplo commented, "Give me that jacket.” 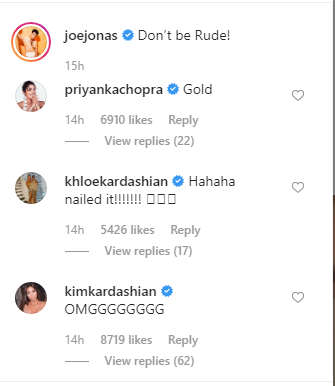 The iconic fight scene happened in the 2008 episode of Keeping With the Kardashians when Kim buying a new Bentley did not go down too well with Khloe.

PeepingMoon Exclusive: Jackie Shroff bags an international film; to play the role of a musician!