Advertisement
HomeHOLLYWOODNewsI'm not sure you understand what an apology is: Cara Delevingne blasts Justin Bieber over Taylor Swift drama

I'm not sure you understand what an apology is: Cara Delevingne blasts Justin Bieber over Taylor Swift drama

Cara Delevingne blasted Justin Bieber over his criticism of Taylor Swift, telling him he should be "lifting women up" instead of criticizing the ME! singer. The comment came Justin defended his manager, Scooter Braun after Taylor called him a bully in her response to Scooter buying her former record label. Delevingne's message was deleted, inspiring even more criticism of Justin.

One of the celebrity responses to Justin's post came from his wife, Hailey Badlwin. She wrote, "Gentleman," which inspired Cara's biting remarks. "Gentleman? [Baldwin] [Bieber] you must be bored. I wish you spent less time sticking up for men and more time trying to understand women and respecting their valid reactions," Delevingne wrote. “As a married man, you should be lifting women up instead of tearing them down because you are threatened."

Hey Taylor. First of all i would like to apologize for posting that hurtful instagram post, at the time i thought it was funny but looking back it was distasteful and insensitive.. I have to be honest though it was my caption and post that I screenshoted of scooter and Kanye that said “taylor swift what up” he didnt have anything to do with it and it wasnt even a part of the conversation in all actuality he was the person who told me not to joke like that.. Scooter has had your back since the days you graciously let me open up for you.! As the years have passed we haven’t crossed paths and gotten to communicate our differences, hurts or frustrations. So for you to take it to social media and get people to hate on scooter isn’t fair. What were you trying to accomplish by posting that blog? seems to me like it was to get sympathy u also knew that in posting that your fans would go and bully scooter. Anyway, One thing i know is both scooter and i love you. I feel like the only way to resolve conflict is through communication. So banter back and fourth online i dont believe solves anything. I’m sure Scooter and i would love to talk to you and resolve any conflict, pain or or any feelings that need to be addressed. Neither scooter or i have anything negative to say about you we truly want the best for you. I usually don’t rebuttal things like this but when you try and deface someone i loves character thats crossing a line..

Delevingne, who is close friends with Swift and appeared in her Bad Blood video, continued, "I am not sure you actually understand what an apology is. This issue that [Swift] is talking out is about far more than a picture and you know that. As you said, you haven’t spoken to her in years which means you definitely don’t understand the situation. I do. Take a step back and try and learn from this. We should all be on the same team. End of story."

Justin appears to have deleted Delevingne's original post, which has attracted even more criticism of the singer. "You deleted Cara’s comment because you feel you can’t have someone out there telling the truth [about] this," one person commented. Others responded by re-posting Cara's message repeatedly, making it difficult for Justin to wipe it from the page. 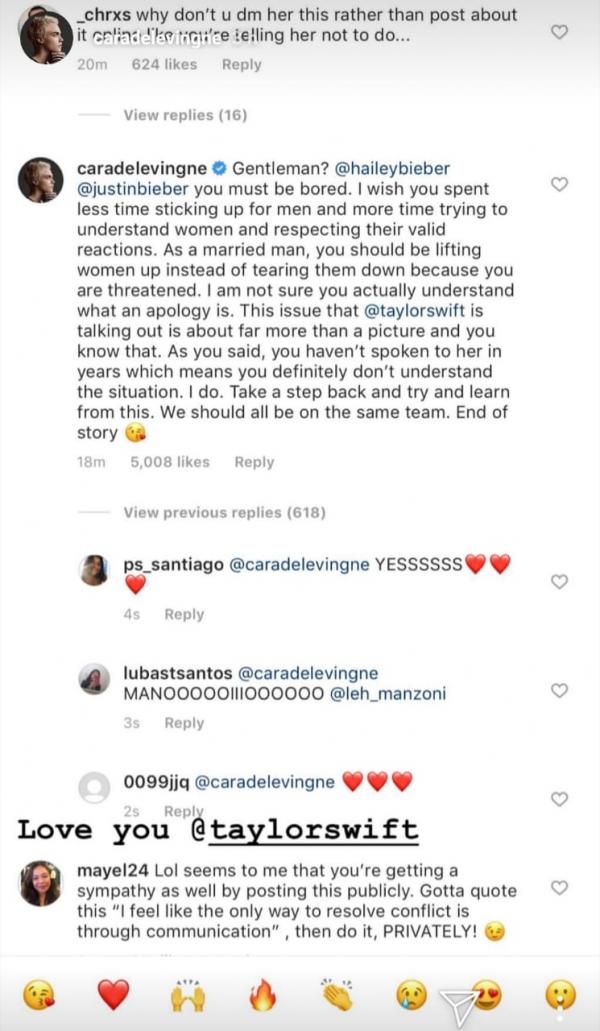 The drama between Scooter and Taylor started early Sunday when it was confirmed that his Ithaca Holdings bought Scott Borchetta's Big Machine Records for more than $300 million. The deal means Scooter, who is Justin and Kanye West's manager, will own Taylor's original master recordings.