Rangeela, PK to Laal Singh Chaddha! On-screen transformation of birthday icon Aamir Khan that will make you 'Fanaa' over the chameleon actor

Taare has indeed come to Zameen Par to wish the Secret Superstar of Bollywood a very Happy Birthday! Rangeela Aamir Khan turns 56 today but continues to beat the millennials with his ‘All izz well’ mantra! He first appeared as a child artist in his uncle Nassir Hussain’s film Yaadon Ki Baarat (1973). Swaying to the tunes of ‘Papa Kehte Hai’, Aamir made a show-stopping entry in B-wood with Qayamat se Qayamat Tak (1988) and the rest is history! In his career spanning 3 decades, Khan has given us massive hits like Dil, Raja Hindustani, Ghulaam, Mann, Sarfarosh, Lagaan, Dil Chahta Hai amongst many others. His notable films include Fanna and Rang De Basanti. He donned a director’s hat for Taare Zameen Par which won him the Best Director Award. His films Ghajini, 3 Idiots, Dhoom 3, Dangal and Secret Superstar made records for being the highest-grossing Indian film. We would next see Aamir on the big screen as Laal Singh Chaddha!

This actor, filmmaker and talk show host is a recipient of numerous awards, including nine Filmfare, four National Film Awards, a Padma Shri (2003), a Padma Bhushan (2010) and received an honorary title from the Government of China in 2017. Wow, talk about the body of work! 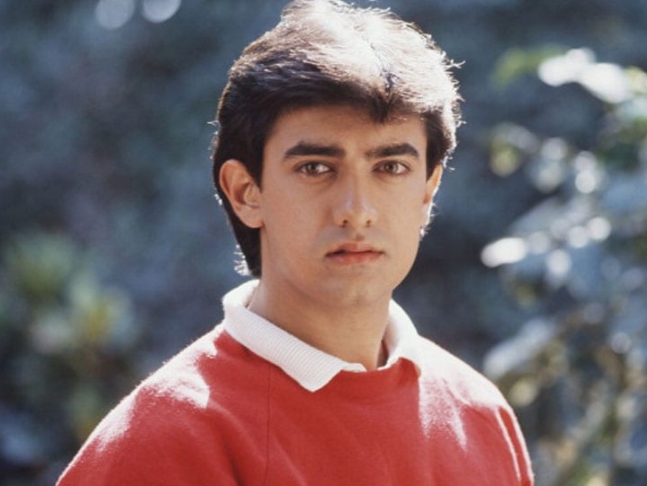 Hands down, Aamir is an exceptional actor, however, what makes him stand apart from the rest of the lot is his act is his ability to slip into any given role and his dedication to do justice to his character with physical transformations. Hailed as Mr. Perfectionist, he is widely recognized for getting every nuance of his role correct for his film. Right from his dialect to mannerisms to physical transformation, he takes almost a year for every film to work on all these aspects of his character that adds to the audience’s movie-viewing experience. No matter the role or the film, Aamir doubles up, shrinks himself, sports a long mane, goes bald, goes eccentric, goes stern and goes to any length to dwell into the skin of his character. By changing his hairdo, beardo and physique, he convinces one that Aamir and his character are nothing but a single entity. And if that’s not dedication, we don’t know what is!

So, on the chameleon actor’s 56th birthday, here’s looking at his iconic on-screen transformation roles, that brought out the best of him, one character at a time! Aamir as Munna was a convincing tapori sporting a stubble and unkempt hairdo along with netted ganjis, eccentric unbuttoned shirts and trousers, a handkerchief around his neck and that signature hat. He also admitted to not taking shower for days to ‘achieve’ his look. He also mentioned that there were no designer clothes made for him, the team used to collect all the clothes that resembled ‘tapori’ and the only outfit that was stitched was the yellow one. The actor as 'Aakash Malhotra' was a trendsetter at so many levels. We all remember the famous goatee, don’t we? Well, that was Aamir’s gift to the millennials! It soon became a rage amongst the youngsters. The first half of the film showed him as a relaxed passed-out college kid with breezy half-sleeved t-shirts and jeans. Post interval, we saw the actor suited up in crisp shirts and tailored blazers. 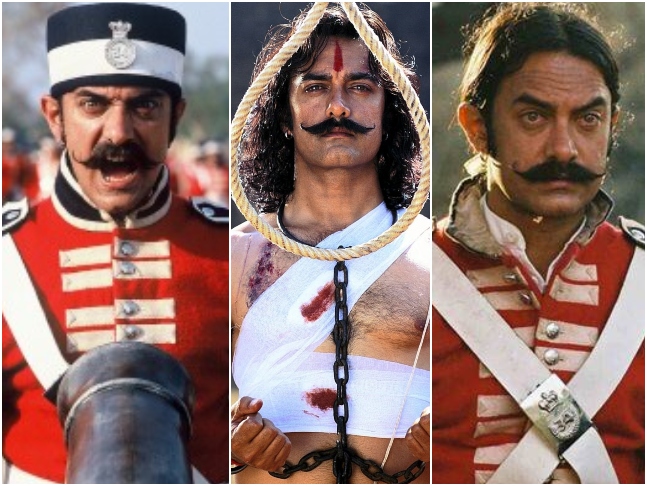 Taking up a historical character, Aamir slipped into the role of Mangal Pandey and sported a thick moustache, a long mane and arched eyebrows. The red British uniform and an occasional laal-tika added to the identity of his character. After playing an upright character, Aamir let ‘Loose Control’ and essayed the role of 'Diljeet' a.k.a DJ a passed-out college student from Delhi University. Round neck tees, with ripped denim and leather jackets made for his attire while that curly mane and boyish charm added its essence to his overall look. 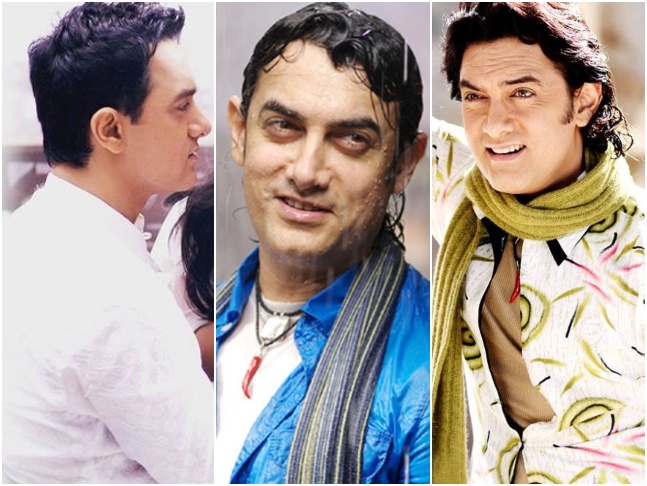 A family man as well as a ruthless terrorist- Aamir led a double life as 'Rehaan Quadari' in Fanaa. HE sported floral shirts and scarves in the first half of the movie but switched to pathanis post the interval. Well, who could’ve guessed this handsome man with a tousled mane and endearing demeanor would be a cold-blooded terrorist?! His look was planned in such a way to make him one of the crowd! 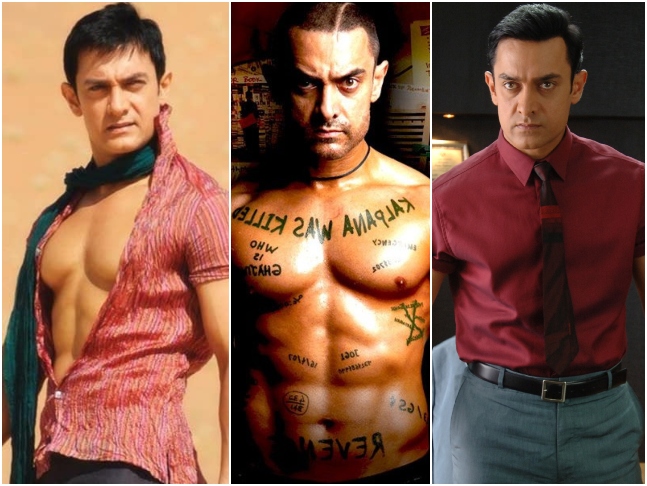 Crisp formals suave pompadour, classy glares and charming personal- we all were smitten by Air Voice Company’s business tycoon 'Sanjay Singhania' but one cannot say the same thing as the film progressed! Aamir kept switching his personalities on mere cues and we were both drooling over and terrified of him. After the death of his girlfriend and getting hit by the ruthless Ghajini that triggered his short-term memory loss, Aamir switched his beast mode on! This film witnessed Aamir sculpt 8-pack abs and sport a buzz cut with a scar mark and lots of tattoos all over his body. Spine chilling transformation indeed! 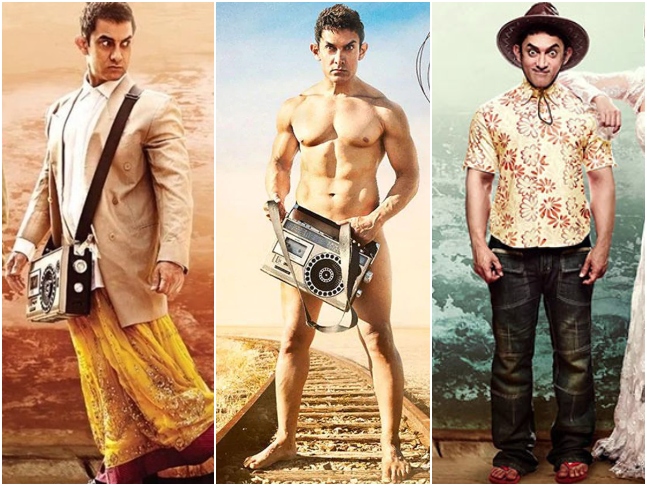 Essaying the character of an alien, the actor as PK gave his lanky frame a muscular twist. To make him look unique and the rest of the lot, Aamir’s character sported green eyes (which he never blinked). He also curled up his lashes to make his eyes look bigger than usual. Blue tacks were used to make his ears pop out to make him seem different than others. In the sartorial department, Aamir experimented with eccentric clothing like shirts with ghagra skirts, body-hugging as well as ill-fitted clothes to give justice to his character. 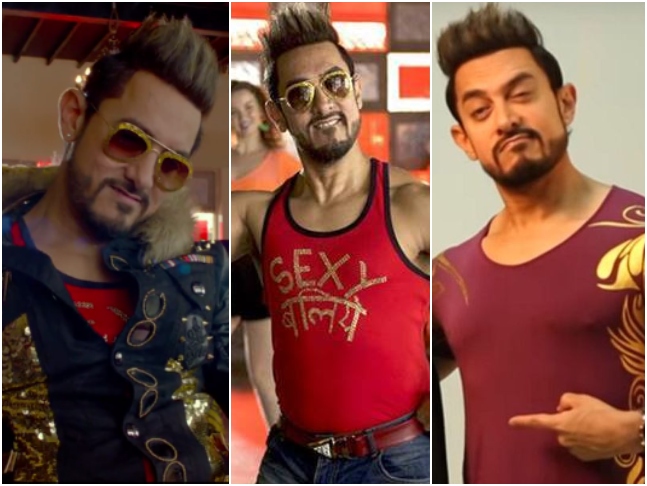 Ditching suave, grungy, trendsetting personas, Aamir embraced his eccentric side as 'Shakti Kumaarr' in Secret Superstar. The actor sported a coloured and spiked mane along with a French beard and opted for ear studs and gold chains around his neck. In the costume department, we saw his character going crazy with spunky tees, s animal prints, faux furs and studded ganjis. Aamir also called this as one of his ‘toughest looks’ 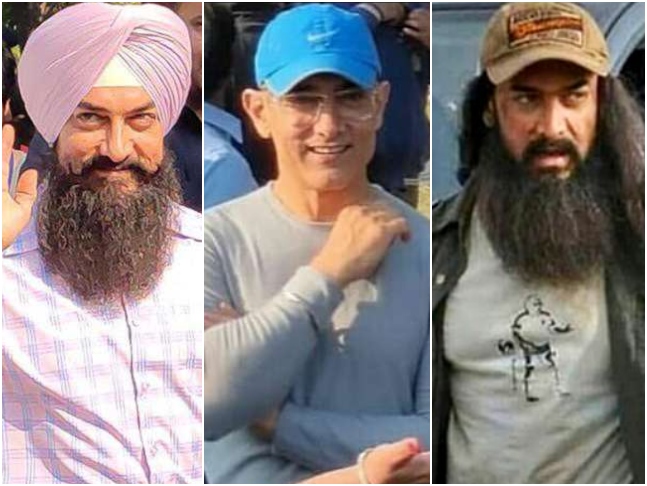 Aamir is all set to essay multiple characters in Forrest Grump’s remake Laal Singh Chaddha out of which three are already leaked. The actor will be seen essaying the character of Sardar, another grungy bearded look and a clean-shaven look in his upcoming film. Though this is just a glimpse, we can’t wait to see his other looks from the film.

Happy Birthday, Aamir. Keep impressing us with your ‘body’ of work for years to come…