Advertisement
HomeTELEVISION NEWSEXCLUSIVE NEWSPeepingMoon Exclusive: Manasvi Vashist put on hold for 2 hours prior to being quarantined; actor to not enter the controversial Bigg Boss OTT house

The controversial reality show Bigg Boss OTT is all set to air from August 8 and the contestants who will be participating in the show as contestants have already been sent to quarantine. We also came to you with the names who will be locked inside amongst which one name was that of Manasvi Vashist. The actor, who plays the character of  Aryan Raisinghania in Ishq Mein Marjawan 2, recently was finalized for the show and was all set to enter the house but at the last moment before he could have left his house for being quarantined, he was put on hold, and we also hear the actor may not be seen in the show.

Manasvi who was approached by the makers for participation in the show was in discussion for the longest time. However, four days back he was finally confirmed to enter the show as a contestant. The news also made his fans excited, creating a buzz on the Internet. 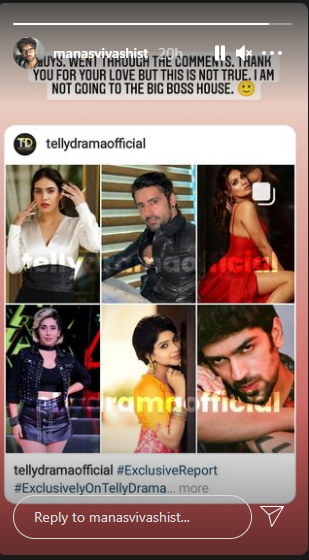 Now, a reliable source says, "Manasvi who was supposed to get quarantined, last evening was informed two hours before he left his house to get quarantined that his participation has been put on hold due to a creative call." Well, this piece of news definitely came as a shock to us and we immediately called Manasvi to know about the development. However, the actor chose to not respond to us.

Meanwhile, a source close to him confirmed the news to us and went on saying, "Yes, Manasvi is a little upset with the last minute decision taken by the creative heads. He was all excited to be a part of this exciting show. And he was aware his fans and people were supporting him and excited to be part of Bigg Boss. He is still hoping that the decision changes and he is open to be part of the show even in the future. But till then he is being extremely positive in doing some good work."