Advertisement
HomeBOLLYWOODEXCLUSIVEPeepingMoon Exclusive: 'We want to make this dying art form as global as our festivals,' says 'Chandramukhi' Amruta Khanvilkar on taking Lavani to the world

PeepingMoon Exclusive: 'We want to make this dying art form as global as our festivals,' says 'Chandramukhi' Amruta Khanvilkar on taking Lavani to the world

Her adakari can make people skip heartbeats. Her beauty is unmatched. And her acting skills have the power to steal the limelight. She is none other than Amruta Khanvilkar. Breaking stereotypes, Amruta is one of the actresses who know how to perfectly balance acting and dancing. Now, she is gearing up for the release of her upcoming Marathi film, Chandramukhi. She plays the titular role of Chandra.

In Chandramukhi, Amruta will be seen doing Lavani dance sequences. Ahead of the film's release, the actress spoke to PeepingMoon about taking the Maharashtrian folk dance form to the globe and why it is the need of the hour. 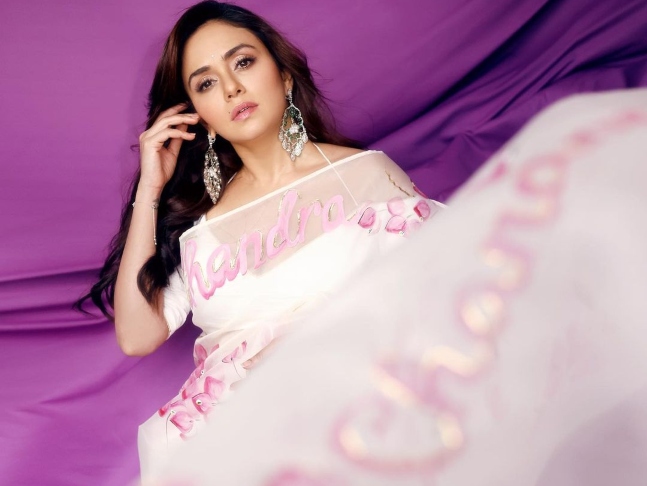 Chandramukhi takes Lavani to the global platform. Are you hopeful that the Maharashtrian folk dance form will finally get its much deserving due now?

I am sure it will and that’s what my producer, director and I are hoping for. The entire team of Chandramukhi waited for 2 and a half years. We are taking a dying art form to a global platform. Like every community, Maharashtrians are all over the world. Being a Mumbaikar and a Maharashtrian, I know festivals that are celebrated in Maharashtra are being celebrated worldwide then why not the art form? I know of Punjabi and Gujarati families who bring Ganpati Bappa home every year. We want to make this dying art form as global as our festivals. There was a 35-foot tall cut out of mine as Chandramukhi at Royal Opera House where only English and Hindi plays are performed. South films never shy away from making their films global, that is what we are aiming at with Chandramukhi.

How did you prepare for Chandramukhi?

It took me eight months to prepare for Chandramukhi which included attending workshops with Lavani dancers and watching black and white films made on the dance form. Every day, I had to memorise each and every Lavani song and my director would give me that homework. When I went on the film's set, I knew each and every line of the script. We got 2 and a half years with us because the pandemic hit the world. We shot Chandramukhi in just 45 days. The wait and patience for Chandramukhi taught me a lot.

Representing Marathi culture on a global platform must be coming with a lot of pressure, right?

(Laughs) There is pressure but there is a lot of passion to it. That passion is currently running in my veins. I feel ab nahi hua toh kab hoga.

You are a great dancer yourself. Did you give any inputs when the Lavani numbers were being choreographed?

Yes. As everyone knows how brilliant Ashish Patil (choreographer) is. I would sit down with him to choreograph all the Lavani numbers. It is important for the choreographer and performer to be in sync. I gave some input but at the end of the day, it is the choreographer who has to decide what has to be served on the plate.

How do you strike a balance between acting and dancing?

Yaar you should ask this question to Madhuri Dixit. I have grown up watching her. She dances like magic, I just cannot take my eyes off her face and expressions. And what a career she has had! For me, Madhuri Dixit is my motivation.