Bollywood buzz, at least in certain websites, is that Ranveer Singh is going to be playing popular Indian fictional superhero Nagraj of the Raj Comics fame in a big-ticket entertainer from Dharma Productions. The actor, who is already signed on by Karan Johar to play Emperor Shah Jahan’s elder son Dara Shikoh in Dharma’s ambitious 2020 period drama Takht, is believed to be in negotiations for Nagraj’s iconic role in the big-screen adaptation of the comic book series.

Strangely, while neither Ranveer nor Karan have excitedly gone on Twitter or Instagram to announce this big and exciting news as they always do, Raj Comics issued a statement yesterday. Manoj Gupta, president of the publishing house, told a news agency, “We are in talks with Ranveer and Karan for a live-action silver screen adaptation of Nagraj. While nothing is inked so far, things are looking positive.” Gupta added that the project is in the initial stages of development and Raj Comics is hoping for a 2022 release of their superhero film. 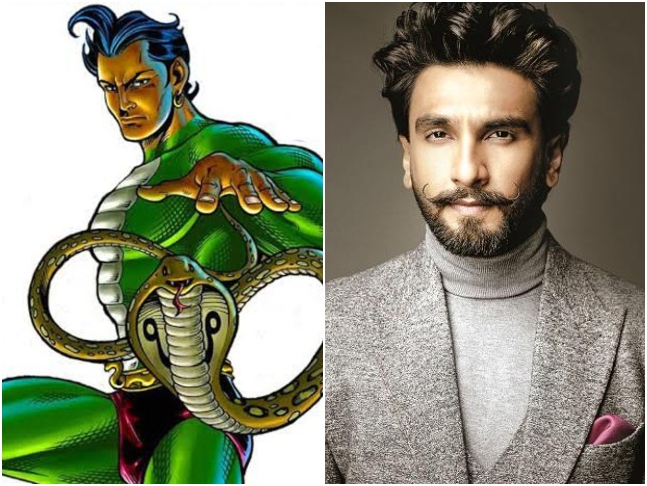 Recommended Read: Exclusive: Suniel Shetty looks dapper in salt and pepper get-up in these leaked pictures from the sets of ‘Darbar’

PeepingMoon.com, however, learned through sources that the production house knows nothing about this enthusiastic collaboration between the publisher, the actor and themselves to make an Indian superhero film based on Nagraj! The adventures of the fictional 1980s ‘Snake King’ are a rich blend of mythology, fantasy, magic and science fiction. And Nagraj, who has changed in print in terms of looks as well as superhero powers and abilities, has achieved a cult following over the decades. But there is no talk in Dharma about making a film on him with Ranveer playing Nagraj, the sources said.

Exclusive: ‘Ranveer Singh is always happy, I have learned to stay po

Exclusive: When Indian actors get intimate on-screen, everyone Is like ‘oh my God’: Sayani Gupta talks about ‘Four More Shots Please 4’