You know this film Lal Singh Chaddha that Aamir Khan is making? The official Bollywood remake of the 1994 Hollywood comedy-drama Forrest Gump starring Tom Hanks that won a clutch of trophies at the Oscars, Golden Globes and also the People’s Choice Awards? Well, there’s a funny story being told in US of A about Lal Singh Chaddha that PeepingMoon.com doesn’t believe a word of, but which bears repetition for whatever it’s worth.

Aamir proudly announced Lal Singh Chaddha on his birthday, March 14, and said he would play the title role that Hanks made famous. But the story we’re hearing is that the Bollywood superstar originally meant the film to be his son Junaid Khan’s launch vehicle in Bollywood. Junaid, who is into theatre, reportedly wants to join Bollywood. And Aamir has no objection to that, he said.

But the twist in the tale apparently is that Wendy Finerman Productions, the maker of Forrest Gump, was excited about parting with its rights only in Aamir played the lead character in the Hindi remake. No doubt, Aamir’s stardom is respected in Hollywood, and the Forrest Gump producer must have thought it would be a coup to have him as the desi hero of the 1994 blockbuster. 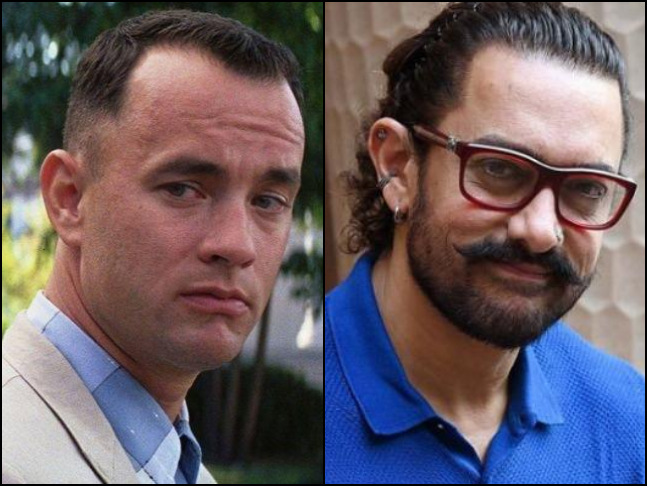 Aamir is believed to have hesitated for long before finally deciding to play Hanks’s role in the Hindi version of Forrest Gump. In 2006, his Rang De Basanti co-star Atul Kulkarni began working on an adaptation of the Hollywood film. He had Aamir in mind for the lead character from the start. But Aamir confessed it took him nearly ten years to consider Atul’s script and get excited about it.

Then began the task of chasing the Hollywood studio for the rights of the film. From what we understand, Aamir plays the role of a Sardar in Lal Singh Chaddha for which he has been growing his beard. The final script is Atul’s. The film is being produced by Aamir Khan Productions and Viacom 18 and is slated for a Christmas 2020 release. Hopefully, something better awaits Junaid Khan.