Advertisement
HomeBOLLYWOODENTERTAINMENT NEWS‘It was all an expression of my affection for her as a friend,’ says Satish Kaushik on Neena Gupta’s memoir

Neena Gupta, who is known to not mince her words and call ‘a spade, a spade’, recently released her autobiography titled Sach Kahun Toh. One of the anecdotes from the book mentioned her close friend Satish Kaushik in which, the actress had mentioned that he had offered to marry her when she was pregnant with daughter Masaba Gupta out of wedlock. Masaba is former West Indies cricketer Vivian Richards’ daughter. Apparently, Satish had told Neena that if her child was dark, they could easily pass her off as his.

Now, Satish has opened up about Neena’s revelation to a leading daily. He said, “Our friendship dates back to 1975 and the bond has been strong ever since. We fondly called each other Nancy and Kaushikan. I have known her family, too. We lived close by in Karol Bagh, Delhi. We were together at Delhi University and were quite active in theatre. Neena jab mere college aati thi, toh hamaare yahaan toh hungama mach jaata tha (laughs!). She impressed everyone even then — with her views and the way she carried herself. She later joined NSD, a couple of years after me. We struggled in our respective ways to make a mark in the film industry. We also did several films together, like Jaane Bhi Do Yaaro, Mandi, and Teree Sang. Though we got busy in our film journeys, whenever we met, it was like a walk down memory lane. I have always applauded and respected Nancy for the way she bravely faced the challenges in her life, especially when she was pregnant with Masaba.” 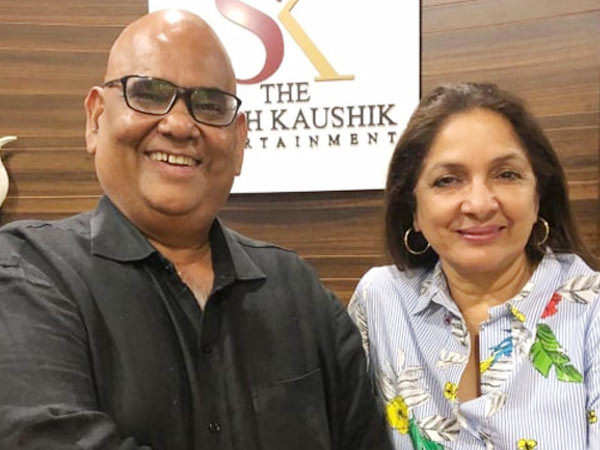 RECOMMENDED READ: If the child is born with dark skin, you can just say it’s mine: When Satish Kaushik offered to marry Neena Gupta after she got pregnant out of wedlock

He further spoke about Neena’s decision of bringing up Masaba on her own out of wedlock and said, “I used to appreciate the fact that a girl at that time decided to have a child out of wedlock. As a true friend, I simply stood by her and gave her confidence. Whatever you are reading in the memoir, it was all an expression of my affection for her as a friend. I was concerned about not letting her feel alone. At the end of the day, that’s what friends are for, right? As mentioned in the book, when I offered to marry her, it was a mix of humour, concern, respect, and support for my best friend in her time of need. I told her, ‘Main hoon na, tu chinta kyu karti hai?’ She was moved by the gesture and was in tears. From that day onwards, our friendship grew stronger. I am happy and proud that she is doing so well as an actor. She is a symbol of a strong woman in our society. She is now happily married to a great guy and a successful entrepreneur, Vivek Mehra and he is a great friend, too.”

Satish also spoke about the anecdote and whether he was aware that Neena was going to share it in her memoir. He told the daily, “She told me that she was writing about her life and if I had any objection. I replied, ‘ Likh tu araam se. No problem’. I salute Nancy and the journey she has had. My wife, Shashi, knows about my equation with Neena, who is a regular at our home. She understands and respects our friendship.”